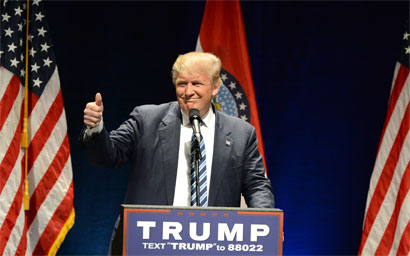 Asian bonds were one of the success stories of last year, enjoying a decent rally that started around February 2016.

Rajeev de Mello, Schroders’ head of Asian fixed income, says that following the election of Donald Trump, protectionist measures will likely increase and these are a direct source of higher inflation. Even if the threat of trade barriers are eventually negotiated down, they will create significant uncertainty for investors.

Additionally, there is the bigger risk of misunderstandings with China – as illustrated by President-elect Trump’s campaign speeches and tweets since the election.

But speaking to Paul McNamara, lead emerging market bonds manager at fund manager GAM, he said China has a lot more leverage than other emerging markets. He notes that it wouldn’t take much to “knock over” the US treasuries market, which is largely owned by the Chinese.

Therefore if the US does decide to put a 45% tariff on Chinese imports, a Chinese response that includes calling in loans to the US could be devastating.

However, McNamara also warns that there would be an element of “mutually assured destruction” if China were to play the debt card.

Others feel that China would react proportionally to trade tariffs. Yerlan Syzdykov, head of emerging market bonds at Pioneer Investments, thinks If the US were to put tariffs on Chinese imports, China’s response would be to put a tariff on soya exports from the US. Figures from the US government showed that food exports to China last year totalled more than $20 billion (€18.7 billion), with soya beans being the most sought-after item.

It seems that most fund managers are still in a “wait and see” mode regarding Asian bonds. However, De Mello says: “At current spreads, corporate bonds seem expensive. So, from a valuation perspective, we are looking for higher yields before substantially increasing our Asian bond exposure.”

Read more about how Asian bonds might perform under a Trump presidency here.