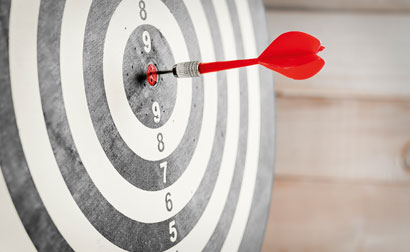 Clarity and agreement about ‘product governance’ topics under MiFID II are needed so that the directive does not become a barrier to investment, finds Nick Fitzpatrick.

Writing a book about investment made Mark Dampier, one of the UK’s most influential fund selectors, realise how hard investing is for the general public.

Researching Effective Investing: A simple way to build wealth by investing in funds, published last year, meant Dampier had to take a fresh look at the topic of personal investment through the eyes of mums, millennials and self-service pension savers, and he realised anew how bewildering the financial industry looks to its customers.

“When I wrote a book on investing, it really brought home to me that if I didn’t have my knowledge and experience, I’d have to work really hard just to understand investment. Even a passive fund is complicated,” he says. Yet for Dampier – who has witnessed much regulatory change in the fund sector with Hargreaves Lansdown, the independent financial adviser where he is research director – regulation can also deter potential do-it-yourself investors as much as their lack of investing knowledge.

This is not to say that Dampier and many others who are concerned about regulation do not recognise its importance for investor protection, which is central to so many law changes taking place. But they do consider that the barrage of regulation may work against the trend for more personal responsibility in savings.

LOST CUSTOMERS
Put one way, regulation creates paperwork. Dampier recalls that Peter Hargreaves, the co-founder of Hargreaves Lansdown, had a rule of thumb that for each additional page of documentation, 10% of potential customers would abandon a pension application.

“A lot of regulation puts people off doing anything at all. The process of giving regulated advice has gotten so complicated and it’s not as though people just defer to DIY [do-it-yourself] investment, because they haven’t got the knowledge to do that.”

Much regulatory change is designed to make it simpler for consumers to understand investment products and advice. In the UK, the Retail Distribution Review (RDR), which came into force at the end of 2012, was driven by this ambition; in Europe MiFID II, which is expected to be enacted across the EU by January 2018, exemplifies the same aim.

MiFID II – an update of 2007’s Markets in Financial Instruments Directive – is for Europe the RDR writ large.

It will result in closer co-operation between distributors and fund manufacturers (see Roundtable, pages 22-31) to ensure consumers are protected and that their needs are prioritised over business interests.

These aims are caught partly under the MiFID II heading of ‘product governance’ and they are aligned to the hot topic of commissions, or inducements, which has overshadowed the MiFID II distribution debate. 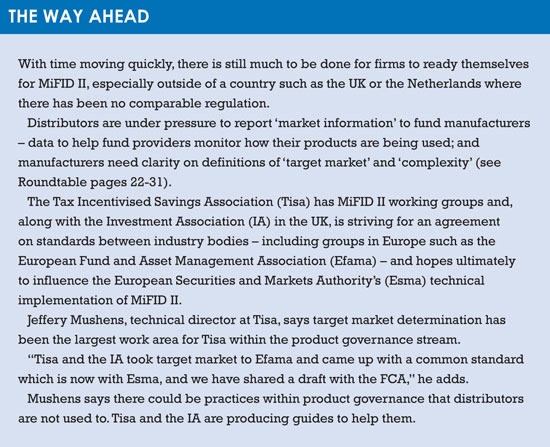 But whereas MiFID II offers some familiarity to UK distributors and fund managers who have been through the RDR, some say the regime could be less familiar to Europe’s firms.

Andrew Glessing, head of the compliance practice at Alpha FMC, an asset management consulting business, says: “It’s fair to say the FCA [Financial Conduct Authority] conduct agenda has been a significant influence on the consumer protection agenda in MiFID II.”

Glessing, who is a former FCA compliance manager, adds: “In UK retail distribution, asset managers have been living in the world of product governance that MiFID II is seeking to take in a consistent way to Europe. It’s quite familiar territory in the UK.”

BUT STILL SOME CHALLENGES…
Stemming from MiFID I, which formed the cornerstone of the EU’s capital markets regulations, MiFID II puts emphasis on investor protection – and a significant chunk of that under product governance relates
to fund distribution, or the sales process.

Under MiFID II, advisers will have to carry out suitability tests for clients when they buy funds, and firms will also need to rule on the appropriateness of funds for clients that are not advised.

In line with suitability and appropriateness is a requirement of fund manufacturers to describe which type of client a product is suitable for (a rule known as ‘target market’). There is also more focus on product complexity.

Jeffrey Mushens, technical director at the Tax Incentivised Savings Association (Tisa), suggests suitability tests are an area where MiFID II product governance might cause even regulatory-hardened UK distributors some challenges.

“Under MiFID II, most suitability tests to be carried out by the distributor are sensible but are more prescriptive than what has been done in the UK before,” he says. Product governance in general for distributors and manufacturers might “not be so much of a change for UK firms, but it will be more structured and firms will have to formalise procedures and report on them more”.

Bill Gourlay, chief executive of Idea Group, says procedures will include record-keeping of decisions made at every step of the product manufacturing line, from idea stage to launch phase and beyond.

“Probable scenarios will be the regulator coming to you, saying, ‘This has all gone horribly wrong, can you show me why?’ You don’t want to be scrambling through thousands of emails to remember why you made the decisions you made,” says Gourlay.

He adds: “If a product manager has a client’s interest at heart, all they need to do is ensure they have the evidence about what they did and why they did it.”

Glessing, at Alpha FMC, says: “Everyone gets the fact that the regulator wants firms not to design products that they know will sell and make a profit regardless, but with its consumer agenda it wants to know the firm has designed products with real needs in mind and that firms have thought through the kinds of customers that need them and, therefore, how they will be distributed appropriately.”

AIMING AT COMPLEXITY
Fear of regulatory action might be a barrier in itself to consumers enjoying a full range of investment products; mis-selling fears are never far from the product governance issue.

Complexity in products is undoubtedly in the sights of regulators, both for advised business and direct sales. David Geale, director of policy at the FCA, said in a speech last year that MiFID II will “expand the types of products that are to be considered complex for investors to understand”. Defining a product as ‘complex’ is important, as it means firms selling these products without advice will need to do an appropriateness test to assess whether a potential buyer has the necessary product understanding, he said.

Dampier says: “If we are going to do so much testing, then this is putting a huge barrier in the way of people investing.”

The funds industry hopes that throughout the remaining MiFID II consultations, ‘proportionality’ will prevail and temper any excessive regulation that inhibits business and savings.