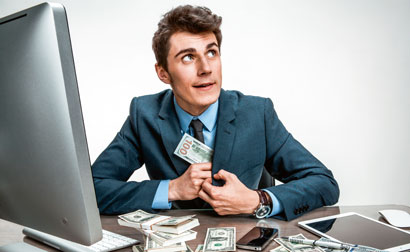 “Buy into the businesses you believe in” runs the strapline on the Seedrs homepage. It’s a new approach to attracting investors by the crowdfunding platform that is one of many crowdfunding ventures transforming finance.

Pedro Madeira, head of research at Beauhurst, a research firm that tracks high-growth companies in the UK, believes these platforms will ably compete with asset managers for funds. “It’s going to happen,” he says. “There is no reason for platforms not to try to cut out other players.”

As evidence, Madeira points to the fact that Syndicate Room, an equity crowdfunding platform that allows the crowd to invest alongside angel investors, has started to offer investment in public as well as private companies. Both Seedrs and Syndicate Room have also already offered a couple of funds to the crowd, though the funds invest in private not public companies and don’t bear much relation to managed investment funds.

“People invest in a cohort of early-stage businesses,” says Jeff Lynn, chief executive of Seedrs. “It’s not really the kind of product that competes with discretionary managed funds.”

One product that comes closer to a fund as we know it is Syndicate Room’s Fund Twenty8, a passive fund, which, as the name suggests, invests in at least 28 companies. The fund closes at the end of 2016 and will have a maximum size of £25 million (€29 million). It is structured as a UK Enterprise Investment Scheme (EIS), which carries tax advantages, and is managed by James Sore, Syndicate Room’s chief investment officer.

In the publicity for the fund, Sore extols the virtues of this investment spread. “With diversification said to be the only free lunch in finance, Fund Twenty8 will invest in at least 28 companies, as further research suggests that this is the minimum portfolio size required to have a 95% chance of backing at least one company returning 10x or more,” he says.

To seasoned investment managers, this discovery of the risk-spreading benefits of diversification may feel a bit like going back to the future. Indeed, apart from the open-necked shirts in Syndicate Room’s corporate photos and the company’s groovy website, it’s hard to see what distinguishes Fund Twenty8 from any other venture capital fund. Yes, it allows the crowd to invest alongside angels and venture capitalists – but only if they have £10,000 to put down.

It’s a far cry from the invest-a-tenner-in-your-favourite-restaurant concept more typically associated with crowdfunding platforms. However, it may be part of necessary evolution.

A CERTAIN SKILL
“People will have to learn that crowdfunding carries risks,” says Patrick Lemmens, lead portfolio manager for the Robeco New World Financials Equities fund. “Some smarter crowdfunding companies are now arguing that investors should spread their risk and not put everything in one crowdfunding solution.”

In any case, Lemmens sees crowdfunding platforms more as a competitor for banks than fund managers, not just as lenders but as an alternative to deposit accounts: “It helps people to put their money to work better than in a deposit account, which generally returns zero. But as with everything, you need a certain skill.”

And there’s the issue. On a crowdfunding platform there is no one to help investors choose investments – not even an algorithm pretending to be an adviser. People have to make the right choices themselves. A platform such as Seedrs does comprehensive due diligence to check that companies are legitimate and to approve their campaigns as a financial promotion, but they do not do commercial due diligence.

“Crowdfunding platforms provide access to an asset class, that is all,” says Todd Ruppert, former CEO of T Rowe Price Global Investment Services and a member of Seedrs’ advisory board. “They are a conduit. You could view them as a beta platform, not an alpha platform. The alpha – if it materialises – comes from the deals in which investors elect to invest.”

Of course, a good way to make alpha materialise could be to get someone who knows what they’re doing to choose the investments. That being the case, some see crowdfunding platforms as a potentially useful tool for fund managers.

“We view ourselves as complementary to and collaborative with the asset management industry,” says Lynn at Seedrs. “What we’re trying to do is give access to an asset class that is traditionally difficult to reach. One component is self-directed investors, but the value proposition is just as useful for fund managers.”

As well as providing fund managers with access to early-stage businesses, crowdfunding platforms could potentially collaborate with fund managers when businesses exit. Lynn says that is already happening at Seedrs, largely on an informal basis. “We have a pretty good relationship with a lot of growth-stage investors, particularly in the UK. We regularly make introductions and talk to investors in subsequent rounds.”

How much they use crowdfunding platforms to invest by themselves is another matter. For while these platforms offer ordinary investors improved access to start-up and early-stage companies, the proposition is less compelling for professional investors. Raising money through a crowdfunding platform certainly can save time and expense, but not every start-up company is sitting on a platform, and insider knowledge still counts for a lot.

“There’s a sub-set of companies that you won’t get access to unless you are rich and you know people,” says Madeira.

In any case, not every company is suitable for crowdfunding. There are closed platforms that are only for sophisticated investors, such as QVentures, of which Ruppert is chairman. To raise money successfully on an open crowdfunding platform, companies have to appeal to, well, the crowd.

“The stereotype is that it’s only breweries and restaurants,” says Madeira. “Over time the profile of typical companies will expand, but they do need to be easy to understand and actively interested in spreading the word and getting PR.” Indeed, for some companies spreading the word is kind of the point of crowdfunding. Lynn says: “A lot of companies come to us not just to raise capital but also to grow their customer base.” He cites English winemaker Chapel Down, which attracted 14,500 investors, 700 of whom bought its wines at Christmas.

The kinds of companies you won’t find on crowdfunding platforms, according to Madeira, are those whose business is hard to understand (such as obscure pharma and medtech firms), those that are boring (such as firms of accountants) and those that are in stealth mode.

STEALING A MARCH
What you also won’t find on crowdfunding platforms are the kinds of high fees that alternative investment funds typically charge.

Seedrs charges companies a fee to raise capital but takes no initial charge from investors, levying only a 7.5% carry on profits. “High fees are worth it if you’re getting a selection of the best,” says Lynn. The problem is, of course, that investors often feel they aren’t getting a selection of the best, either from alternative investment managers or from traditional active fund managers.

This is where crowdfunding platforms perhaps could steal a march on traditional fund managers. Dissatisfaction with active funds that don’t produce alpha creates an opportunity for them to offer investors a combination of passive investments for exposure to publicly listed companies and bonds, alongside a portfolio of high-growth companies with the potential to generate seriously high returns.

“There is an opportunity for crowdfunding platforms to become a one-stop shop for different kinds of investment,” says Madeira. This, however, would almost certainly require them to be bigger and to have a business model that turns a demonstrable profit. As an investor in the fintech sector, Lemmens has not yet been impressed enough by any crowdfunding business model to invest. “Only two companies are public, OnDeck and Lending Club, and the performance has been terrible,” he says. “When they came to market I thought the valuation was far too high, and I’m still reluctant to invest in companies that don’t have positive cashflow.”

To become a one-stop shop, crowdfunding platforms would also need to partner with asset managers. At the moment, this isn’t really happening, though Lemmens says, “the combination of asset management and crowdfunding could be very interesting”.

Some, however, see disruption in the finance sector going in a completely different direction.

“Whereas there have been significant shifts in assets from bank loans to finance being provided by asset managers – who also are playing a great part in financing illiquid assets such as real estate and infrastructure – I suspect that crowd funding will always be at the margins,” says Bob Parker, senior adviser in the investment, strategy and research group at Credit Suisse.