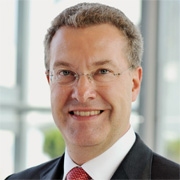 Given the turmoil in ertain Middle East countries it is just as well that Rudolf Apenbrink did not travel there in the first half of the year. However, given that he is the Europe, Middle East and Africa CEO for HSBC Global Asset Management, a trip is certainly due. He was expecting to visit the region in the second half.

The journey would come at a time when HSBC Group is slashing 25,000 jobs in countries and regions including the Middle East to save $3.5bn (e2.4bn) in annual costs.

But while the group may be cutting back its staff numbers in the Middle East, the asset management business recently set about increasing its capital market investment in one country of the region – Egypt.

This came through the May 2011 launch of the ‘Civets’ fund, said to be the first to invest in the next wave of emerging markets: Colombia, Indonesia, Vietnam, Egypt, Turkey and South Africa.

“Until now I have not been to the Middle East but I will go in the second half of the year. It’s an interesting region because of the emerging market character of it,” says Apenbrink.

Domestic businesses
Apenbrink was appointed to his Emea role in October last year and since then, out of the patch he covers, Apenbrink says that apart from France, the UK and Germany, he has spent the most time in Turkey, which is an important emerging markets manufacturing base for the HSBC fund management business.

Its assets under management in the emerging markets are around $145bn and this, says Apenbrink, means HSBC Gam is one of the largest investment managers in the region.

As well as investing in the capital markets of emerging economies, it is also establishing a fund management business targeted at populations in those countries.

“We are building domestic asset management businesses in, for example, China, India and Brazil and we want to position ourselves as the connection between the emerging markets and the developed world,”

Apenbrink says.Apenbrink’s Emea role clearly does not have him oversee those countries, but prior to this he was head of Asia Pacific for the HSBC asset management business.

“In a very regulated market like China it’s quite difficult. The regulator tells you what you can and can’t do when it comes to launching a new fund.

“It’s difficult for foreign asset managers to become number one in these local markets where there are many local fund houses, so we are attempting to be the leading international fund house.”

“There are two segments to its asset management industry – the local players and the joint ventures. Both are important. But when it comes to innovation and the Chinese want to try something new, they use their local managers first and let joint ventures join in later.”

Apenbrink says this has created a two-speed industry with local fund houses having an advantage over the joint ventures.

“However, my experience was very, very positive. Our partner [Shanxi Trust and Investment Corporation] was very supportive and there was a clear division of rules. It was a formal relationship when I was there for the first time, but after three years it was a close and warm relationship.”

Sticky revenues
There was a time when Citi might have joined HSBC Gam’s list of investment management rivals in the emerging markets. Like HSBC Group, Citi has a highly recognisable banking brand in many large emerging markets, such as India. But Citi pulled out of asset management to focus on distribution in 2005 with the sale of its business to Legg Mason.

Apenbrink, who has been with HSBC since the 1990s, said there was a clear intention from HSBC to remain in asset management.

“This was partly in order to keep hold of most of the value chain involved in asset management production, and also because of risk: when you buy funds from other providers, you do not know what you are getting in them.”

He says revenues from asset management are high quality and “quite sticky if you have long-term investors”.

Another less recent but quite dramatic change was HSBC’s entry to the exchange-traded funds (ETF) market. In August 2009, seeing that ETFs had gained ground in recent years, HSBC announced its entry to the market and launched the HSBC FTSE 100 ETF. HSBC Gam is the investment manager and HSBC Global Markets is the market maker.

At the launch, HSBC said it planned to extend its ETF business across Asia, Latin America and the Middle East.

HSBC Gam is not the first predominantly active manager to enter the ETF market, but how does the passive business sit with the firm’s more active strategies run by subsidiaries such as Sinopia Asset Management and Halbis Capital Management?

“I believe we are doing what is right for the client. There are certain clients that are right for this product.

“However, emerging markets, for example, are not informationally efficient and so there is good reason for having active funds for that exposure.”

German interest
Apenbrink is German. His fellow country folk are typically seen as conservative investors. Perhaps the passive nature of ETFs will do well there for HSBC in time. But what does he think the Germans will make of emerging markets?

“I think penetration of equities in Germany is very low due to the experience that personal investors had with Deutsche Telekom a few years ago. However, mutual fund equities are quite big.

Perhaps Apenbrink is the man to turn Germany, then. As for the Middle East, perhaps a visit in the second half of the year will reveal more strategy there.