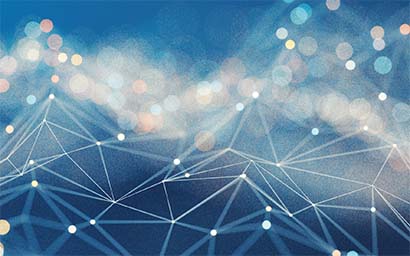 As Alex Rolandi reports, custodians have made headway in their tech development through a number of partnerships over the past year.

Ambitions for digital and automation predominate in custody. Custody banks have created partnerships with fintech firms, established tech providers in asset management, and have generally increased their own internal tech investment.

The objectives for this cut across many asset servicing functions, including the ability to provide clients with voluminous market data; to apply AI to client queries (which can number in the tens of thousands each month); and to offer front-to-back-office connectivity for asset managers and asset owners.

In his March 2020 letter to shareholders – which mentioned large investments in technology and the need to build a “technology-driven” and “digital culture” – BNY Mellon veteran Todd Gibbons, the newly confirmed CEO, also spoke of making “market-leading” and “industry-first” partnerships with institutions across the front-to-back value chain.

He would have been referring partly to a deal with SimCorp, announced in December last year, whereby BNY Mellon’s custody business is now connected to SimCorp’s Dimension, one of the main risk and investment platforms used by asset managers. Dimension is a rival to asset manager BlackRock’s Aladdin.

Another example of a partnership, this time with a pure fintech – a deal that may have done much to bring asset servicing into the modern age – is the recent announcement from JP Morgan that its securities services business had fully automated processes for opening custody accounts with the help of US fintech Saphyre. BlackRock was involved as an inaugural user of the platform.

Cast around elsewhere for signs of how custodians are applying tech development to increase their value-added services and we see, for example, Northern Trust focusing on the outsourcing of front-office activities, which principally means dealing in securities.

BNP Paribas Securities Services is equally as keen on providing centralised, outsourced dealing desks for clients – the front office being the ‘final frontier’ of outsourcing for asset managers.

Although the benefits of technology should lower costs, not only for asset managers but also for custodians themselves, the initial investment is high. Tech investment has been going on for years and continues to do so. 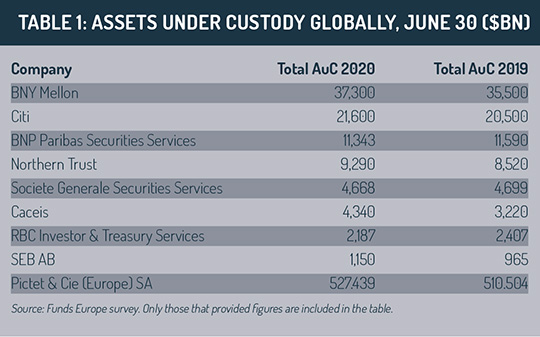 In this year’s second quarter, a number of firms saw their technology expenses continue to rise compared to the same period in 2019. BNY Mellon spent $345 million (€291 million) on software and equipment in Q2 – up by about $20 million from Q1 2020 and by more than $40 million from Q2 last year.

The firm is proactive in the automation space and, like other businesses, sees it as a means to free up staff to focus on client needs or product strategy. But with automation, concerns about job losses within custody are never far away.

That said, the number of full-time employees across BNY Mellon’s businesses increased by 400 to 48,300 in the second quarter – though this was still down compared to the previous year.

The amount State Street spent on information systems and communications rose to $376 million, an increase of 3% year-on-year. The firm said this was largely software and technology infrastructure costs and partially offset by vendor savings.

State Street also spent 3% less on compensation and employee benefits year-on-year. This was primarily driven by lower headcount and salaries, according to the firm.

Northern Trust said it had recently rolled out a platform to further digitise its asset servicing offering and reported a year-on-year rise in equipment and software expenses of 10% to $326.4 million across its businesses.

Similarly, Northern Trust’s assets under custody decreased from over $9.2 trillion at the end of 2019 to around $8.2 trillion by the end of March this year.

Firms have since bounced back. By the end of the second quarter, in many cases, AuC rose again to pre-Covid levels.

It looks like Covid-19 will be around for some time, but by and large, custodians have shown their businesses to be resilient. Continued investment in new technological systems will become increasingly paramount in this paradigm of uncertainty – and help create a safeguard to offset any unknown risks the future might hold.