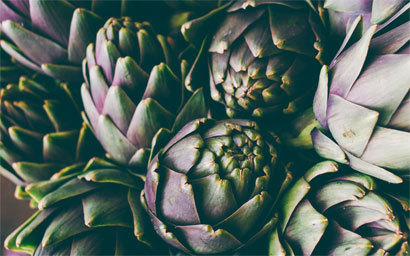 Competition in French asset management is between 600 firms, some very large, some very small. Often the small firms try to distinguish themselves on their investment ideas. David Stevenson looks at some of France’s best-known boutique managers.

France is home to Europe’s biggest asset manager, Amundi, which has more than €1 trillion in assets under management (AuM). Other captive asset managers are owned by banks, giving them a huge advantage in terms of distributing their funds. So, how can smaller, boutique asset managers hope to compete with these behemoths?

“Next time there’s a big market upheaval and a problem with clients, there’ll be open architecture again [so bank distributors have] access to funds which they don’t have in their own courtyard,” says Didier Saint-Georges, managing director of France’s largest independent asset manager, Carmignac.

He recalls that as the financial crisis developed, traditional investment funds offered by captive managers performed badly, prompting distributors to open their architecture and allow investors to access funds from other firms. Resilient markets in more recent times, coupled with the need for financial institutions to make money, means in-house funds are once again dominant, however.

Carmignac’s business model is aimed at retail investors in all markets it operates in and independent financial advisers are important to its distribution. Saint-Georges says: “When the banks start opening their architecture again, we’re happy to have our funds distributed through banks as well.”

In France, though, many firms that are boutique in nature are in fact owned by large managers. An example is CPR, a wholly owned subsidiary of Amundi. Thanks to its parent firm, it does not have the same problems with fund distribution as other boutiques.

CPR now manages all thematic strategies for Amundi and it’s the thematic range that distinguishes the firm from competitors, says Valérie Baudson, who was appointed chief executive earlier this year. She highlights CPR’s Silver Age fund, which focuses on companies geared towards the theme of an ageing society. Its European version manages €1.5 billion of assets, and there is also a global fund.

Other thematic funds run by CPR include a special situations fund that has €1 billion in assets and focuses on stocks that might be involved in M&A or debt restructuring. It also has a €500 million luxury-themed fund, plus global resources, agriculture and gold mining, with a collective AuM of €700 million.

According to Baudson, CPR has “the best of both worlds” for an asset manager: the freedom of a boutique to innovate, but at the same time the backing of Amundi’s middle- and back-office engine, including the compliance function, which can be onerous for many firms.

The firm has €37.5 billion in AuM, a sum Baudson plans to increase to €50 billion by 2020. Her second objective is to get half the firm’s inflows from abroad; at present, 95% of its assets are held by French clients.

In looking to branch outside of France, the firm will use Amundi as its main partner. Some of the major deals CPR has done this year involve jurisdictions such as Taiwan, Oman and Korea. It also has a joint venture in Korea, which allows its Silver Age fund to be distributed there.

The French business is mainly institutionally driven and Baudson says that this, historically, was the most important part of the business. The firm covers all the large institutional French investors, including insurers.

THE FRENCH MARKET
In all but client terms, insurers are a thorn in the side for many French managers. One of the main challenges that French funds have faced is the popularity of investment-based insurance contracts that offer guaranteed annual performance.

However, these products are “reaching the end of their lives”, says Saint-Georges at Carmignac. Low interest rates mean that insurance companies have been increasingly unable to deliver returns on these vehicles.

His hope is that investors will turn to funds such Carmignac’s short-duration bond product, the Carmignac Sécurité fund. However, he concedes that the guaranteed products are “hard to beat”, in part thanks to capital protection, and because no tax needs to be paid if they are kept for eight years.

Comgest is another French firm with a boutique identity, but which belies the idea that boutiques are small; it has a wide range of global funds.

“Many French professional investors now have a good understanding of our expertise and we are comfortable with our profile in the market,” says its investor relations manager, Sébastien de Frouville. France is its largest market – 30% of the firm’s AuM is sourced there.

The most popular Comgest funds in France are its Renaissance Europe fund, which deals in European equities, and Magellan, an emerging markets fund. There is also a global equities fund called Comgest Monde and an Asian equities fund, CG Nouvelle Asie. All of these funds have a 20-year track record.

According to de Frouville, the firm’s long-term investment approach sets it apart from mainstream players. “We believe that over time, earnings per share and stock prices converge, so we prefer to focus on these criteria which, in our view, are less complicated to forecast than the wider economic cycle,” he says.

Meanwhile, Paris-based asset manager Tobam is famed for its “anti-benchmark” stance. The firm’s president, Yves Choueifaty, who won Funds Europe’s chief investment officer of the year award in 2015, has been particularly vocal in his critique of benchmark usage for any asset class. The firm has $8.8 billion (€8 billion) in AuM and scored a success this summer with its US credit fund. The fund’s inflows reached $300 million, having launched last November.

A firm with similar assets under management is employee-owned La Financière de l’Echiquier, managing around €8 billion. It is known for its stock-picking expertise, and chief executive Dominique Carrel-Billiard, formerly chief executive of Axa Investment Managers, insists his funds have more than 85% active share.

Even though it’s a small independent firm, it has opened offices in markets such as Milan and Frankfurt. Its small selection of funds covers European equities, global equities, diversified and credit funds.

THE NEED TO BE NIMBLE
One of the perceived advantages boutiques have over typically larger competitors is that they are able to move faster as markets change. However, Saint-Georges says being nimble is not a matter of size, but a matter of “character”. 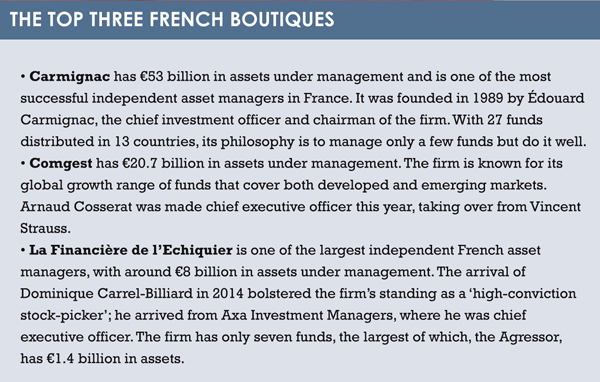 His firm is holding a substantial cash position at the moment due to market volatility. His reasoning is that if the market has priced in the wrong outcome of an event, such as the shock Brexit vote, there’s very little upside if the market is right.

Conversely, if the market is wrong, it can present good buying opportunities.

“When you get a 10% sell-off, it becomes very easy to invest into this – you’re benefiting from all these guys who speculated on the outcome who are rushing out the door and you get things at good value,” he says.

He dislikes the term ‘contrarian’ as he says it suggests investors will position themselves even if it goes “against your own views”. He would not, for example, have bought oil at a low price in February if he hadn’t had a bullish view of the commodity.

If boutiques are to continue to flourish in France, they need to offer strategies that are not available from large players such as Amundi, BNP Paribas Investment Partners and Natixis Global Asset Management (NGAM). But if a firm does offer something investors want, it’s likely that larger houses will try to buy them as a means of adding to their own expertise. This happened last year, when NGAM bought a 70% stake in equities specialist DNCA.

For the time being, however, the French market seems big enough to accommodate independent firms that refuse to be squeezed out by the big players and their international distribution networks.