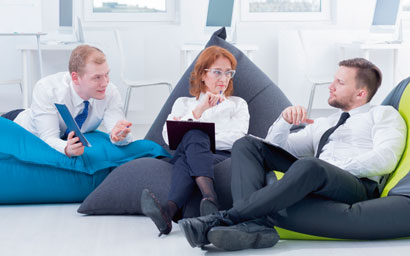 Despite the hype around fintech, the finance industry is resistant to disruption – for good reasons. George Mitton reports from Sibos in Geneva.

“If you went in there blindfolded, you wouldn’t realise you were in a bank,” says one Standard Chartered employee about eXellerator, the firm’s recently opened innovation lab in Singapore. In place of suits, ties and trading screens, the lab is decorated like the headquarters of a Silicon Valley start-up, complete, she says, with “luminous bean bags”.

The initiative is part of Standard Chartered’s efforts to engage with that most talked-about trend: financial technology, or fintech.

Across banking, companies are rushing to invest in so-called disruptive technologies, but the trend raises questions.

Can innovation be made to happen on demand? Do the big banks actually want their businesses to be disrupted – and would the world’s regulators allow it?

AN ECOSYSTEM
The annual Sibos conference, an enormous event covering almost everything to do with bank infrastructure, is a good place to ask about fintech.

Held this year in Geneva, the event was attended by practically all the world’s major banks. Everyone, it seems, was committed to fintech.

Take BNY Mellon, for instance. Not content with having its own innovation labs in the US and India, the company has created an online service called Nexen. The idea, says Saket Sharma, chief information officer for treasury services, is to gather the most useful services created by fintech firms and offer them to BNY Mellon’s clients.

The services include Heckyl, a system that analyses thousands of information sources to gauge investor sentiment towards stocks. Nexen users can access Heckyl’s data and algorithms on Nexen.

“We are building an ecosystem for fintech,” says Sharma.

Other banks are carrying out similar initiatives. JP Morgan says it will soon open its third innovation lab, in London, to explore how to implement new technologies across the company.

The firm has bought stakes in fintech firms and collaborated with Digital Asset, a New York-based start-up, on a trial of blockchain, the distributed ledger technology made famous by Bitcoin.

“Is fintech a buzzword? I would have agreed 18 months ago,” says Ann Doherty, co-head of investor services sales. “Now, it feels a lot more real.”

Everyone, it seems, is involved. Societe Generale Securities Services created an “innovation board” at the start of the year to explore novel technologies. The firm sees opportunities in several areas: blockchain technology to make transfer agents more efficient; robotics to reduce manual work in the back office; and machine learning to interpret the mass of client data it stores.

“Clearly,” says chief executive Bruno Prigent, who set up the board, “we are open for innovation.”

NOTHING NEW
Fintech, it seems, is having a moment. Everyone wants to say they are doing it. However, there is a problem. As a term, ‘fintech’ can refer to such a broad range of activities, it is hard to say anything concrete about it.

Jean-François Abadie, chief executive of Caceis, captures something of the term’s vagueness when he remarks: “We have spent our lives developing systems. In a way, we are fintech.”

His point is fair. Fund servicing companies have dealt with data for decades, investing in computers to cut costs and raise efficiency. That is a form of financial technology.

But if everyone can be a fintech company, how novel is this technology? Not very, say some sceptics.

“Fintech isn’t a new thing,” says Tony Freeman, European head of industry relations at DTCC. “It’s mostly a label for something that’s been there a while.”

What, then, explains the sudden voguishness of the term and the investment pouring into it? Perhaps it is better to see the so-called fintech revolution – as far as it is performed by the big banks – as less a brave new project and more a sort of defensive strategy.

In terms of adversaries, you need not look far for precedents. In the 1990s, the music industry was undermined by an unexpected opponent – online file-sharing services such as Napster. Revenues from selling tapes and CDs plummeted; income generated by streaming music has recovered only a fraction of what was lost.

Publishing was the next industry to be hit as online platforms such as Google and Facebook took on the traditional role of newspapers as the medium through which readers got their news. Print advertising revenues collapsed; Mark Zuckerberg became a billionaire.

Many in the finance industry worry they will be next to be capsized. Robo-advisers threaten to put human advisers out of a job; machine-reading tools such as IBM’s Watson system might shrink legal and compliance departments; crypto-currencies such as Bitcoin even promise a dizzying future in which traditional banks become obsolete.

The flurry of investment in fintech can be seen as an attempt by the banks to bolster themselves against the threat. By buying challenger firms and developing novel technologies in-house, the banks hope to control the process of change and prevent their businesses, to use the dreaded term, being ‘disrupted’.

GLORIOUS RULES
Unlike the music and publishing industries, finance has a good chance of defending its market share against outside challengers. Why? Interestingly, its saviour is something the industry usually complains about – regulation. In their bid to ensure stability, regulators have created formidable barriers to entering finance.

“In finance, there won’t be a Netflix that destroys Blockbuster because of the highly regulated nature of the industry,” says Freeman.

The constraints set by regulators partly explain why blockchain has gone from being seen as a dangerous competitor that could render thousands of people jobless to being viewed as an interesting if dry technology that will probably be implemented over many years within existing banks.

Blockchain’s power is not disputed. One speaker at Sibos remarked it would have the same effect on finance as the shipping container had on world trade – huge efficiency gains thanks to standardisation.

But it seems the technology, as developed by firms such as Ripple and Paxos, will be integrated by partnerships with existing banks rather than deployed as a game-changing independent force. The finance industry wants blockchain under its control and regulators, mindful of systemic stability, have an incentive to preserve the status quo.

“Blockchain could enhance efficiency,” says Katrina Sartorius, global head of Funds Place, Euroclear. “Settlement at T+0 is possible. But the industry has to move with you. There won’t be a revolution, even though the technology has the capacity to do that.”

This raises the question, is innovation possible in finance? In banking, regulation seems to privilege incumbent firms to the detriment of incoming ones, a recipe for preventing dramatic change. One explanation why web giants such as Google and Amazon have yet to enter financial services is that they are discouraged by the industry’s intimidating regulation.

Perhaps emerging markets will become the breeding ground for fintech. Africa has already emerged as a leader in mobile payments, with the M-Pesa system in Kenya and Tanzania. In Asia, China’s relatively permissive financial rules allowed an affiliate of Alibaba, the e-commerce giant, to launch a money market fund, Yu’e Bao, that swiftly became the biggest in the country.

Fintech is the future of finance, but in an industry resistant to disruption, the revolution may still be some way off.