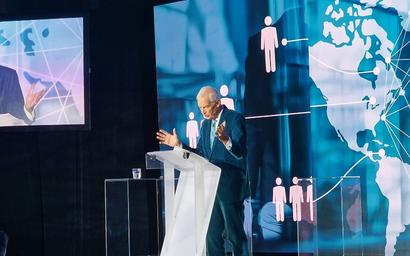 “2022 has turned the world order upside down” was the stark words of journalist and TV presenter Jon Snow, formerly with Channel 4 News and diplomatic editor of ITN, during his speaking session on day two of ALFI’s Global Distribution Conference in Luxembourg.

The session ‘The way ahead in a troubled word’ was advertised as a detailed account of how “what was a ‘given’ is now being questioned”. There is war in Europe, something that “no one” would have thought possible, a “rebuilding” of the iron curtain, expansion of NATO and the overall direction of travel being “very unclear”, Snow explained.

Ongoing crises
Speaking to a large crowd, Jon Snow began by discussing ongoing crises. Starting with the Ukraine-Russian War, Russian president Vladimir Putin was highlighted as bringing the world “back to the dark times”, with Snow having pressed the crowd to know that Russia’s expansion ambitions hadn’t changed. The ongoing escalation in the Far East was also singled out by Snow, which affects China, Taiwan and the US. “Beijing has historic ambitions to enlarge China,” Snow stressed, but its fragility had been exposed by the way the country was impacted by the Covid-19 pandemic.

Geopolitical challenges in the US
The topic of the geopolitical challenges in the US was then raised by the TV presenter, who voiced concerns about the ongoing impact of Donald Trump. “The aftermath is still disturbing”, remarked Snow, symbolised by the January 6 United States Capital attack. US democracy is capable of “electing so flawed a politician”, rued Snow. “There is evidence of a great populace resentment”, he warned, “and they feel like they haven’t shared in the boom other cities experienced.” Snow went on to explain the phenomenon made "left-out" communities see “the absurdist Donald Trump” as “kicking the system in the teeth” and a stark contrast to what came before.

The digital age
The digital age was cited as playing a crucial role in this “turning” of the world since it “reminds people of what they don’t have and what others do have”, stated Snow. The rise of Donald Trump was facilitated by the digital age, he remarked, with the former US President having used Facebook to “attack” people he didn’t like. 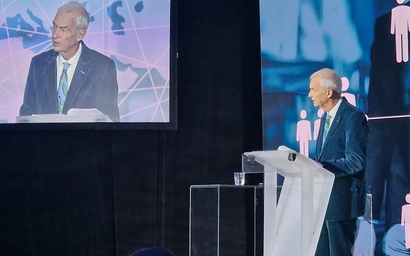 Brexit and Europe
Europe’s relationship with the United Kingdom was also brought up, which stood as a topic Jon Snow found “difficult” to discuss as a neutral journalist. “Scotland has a very different view of the EU than England”, he reminded audience members, meaning that Brexit may end up “splintering” the UK altogether. Additionally, the UK is now subjected to trade barriers from Europe, which Snow cautioned would “deter” other countries from leaving Europe. “Referenda are a very dangerous tool in the wrong hands”, Snow affirmed, who also referred to the role referenda played in the second world war.

Trade
Regarding trade, it’s difficult to know what will happen in the future, Jon Snow explained. “However, here in ALFI, we are here connecting, almost like we were still in the European Community […] Trading relationships are symbolised by ALFI. Humanity has not evolved to ignore and reject the relationships we’ve built over many years. We must find new ways to go forward together.”

In conclusion, Snow stressed the importance of optimism and that “people can come together no matter our differences”. We have more in common than that which divides us, Snow explained. “Somehow, we must prevail; We have to pull together”.