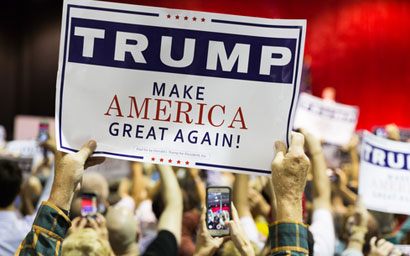 Donald Trump’s presidency was positive for developed market equities as investors took a ‘risk-on’ approach, according to an analysis of 108 model portfolios.

During the last three months of 2016, although there was a shift by conservative fixed income investors into cash, a Natixis Global Asset Management (NGAM) quarterly ‘Portfolio Barometer’ survey also found UK investors in moderate model portfolios had an increased appetite for risk.

These investors shifted out of global and UK large-cap sectors into UK small-cap, despite little change in overall equity exposure. This was a reversal of previous 2016 trends.

NGAM said risk-on seems to have been the “mantra” of the final quarter of last year as Trump’s policies increased both inflation expectations and growth.

Another finding was that across conservative, moderate and aggressive portfolios, there was a reduction in allocations to property, which the firm felt happened as investors were allowed to make redemptions after restrictions on direct property funds were lifted.

The firm also expects the US Federal Reserve to begin to raise rates more rapidly than had been previously expected before the election result.