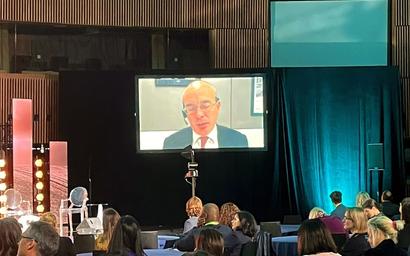 What's driving global growth and what's slowing it down were central questions of a keynote speech on day one of ALFI's Private Assets Conference in Luxembourg.

The keynote, given by Paul Donovan, global chief economist, UBS Global Wealth Management, also focussed on the role of inflation and the policy response.

Economic data
"Before I start talking about the economic outlook, there is a critical point underappreciated in the financial market," began Donovan, "the quality of economic data deteriorated significantly in recent years, especially since the pandemic."

Data revisions are getting "larger and larger," he exclaimed, and revisions are "biased", with people "revising up" economic data. It's important to remember this, he added, as people look at the economic outlook since there will be further economic revisions.

Donovan also said that people must be careful in assuming data is precise: "Don't be too confident in the numbers. It's not my forecast that is wrong, but it's the data that is wrong."

Audience members were reminded that there is still a "pandemic economy", and its effects are "still felt". There is low unemployment with negative real wage growth, he said, and at the same time, consumer spending has been stable, remarked Donovan.

"These three things shouldn't exist simultaneously," he said. Companies are "hoarding" labour and are reluctant to fire workers because of problems hiring. Simultaneously, pay bargaining buying power is relatively weak, he added.

Few people in higher-paid jobs are changing their employer, he continued, since pay rises often follow employer changes: "Higher skilled workers are not changing jobs frequently, and flexible working is creating a barrier."

"We need to see real wage growth stabilise to move back to zero before savings run out," claimed Donovan, asking audience members "how do we do that?" He pointed to the lowering of inflation. "But how do we bring down inflation?" he asked.

Inflation
Donovan was keen to remind audience members there has not been persistent inflation in the global economy. However, he enumerated three distinct waves of inflation. The first, transitory inflation, took place in 2021.

Macro-economic landscape having 'real implications' for everyone

The second inflation happened in 2022 when spending on services and savings dipped: "As demand goes down, inflation turns to deflation," he said.

The third and current wave of inflation is caused by rising profit margins, he explained. "Companies have used stable consumer demands and the ability to blame someone else for the sake of increasing prices", warned Donovan, who gave the example of supermarkets increasing bread prices because of the Ukraine-Russian war's impact on the price of wheat. "Consumers think that is fair. Economists doubt it", he remarked, and what's happening is an "expansion" of pricing power, causing banks to focus on slowing demands to squeeze profit margins to lower inflation.

The outlook
We have a challenge, stressed Donovan. "We cannot assume current levels of profit are sustainable since margins will be squeezed and demand will be slowed," he concluded. Looking ahead, profit margins will be tightened to lower inflation, he added, increasing volatility and uncertainty.