In fairness to the funds industry, the challenges ahead are daunting. Within the business, core systems and processes have often metamorphosed beyond their original aims (due to ageing technology, changing regulation and customer demands), making change difficult. 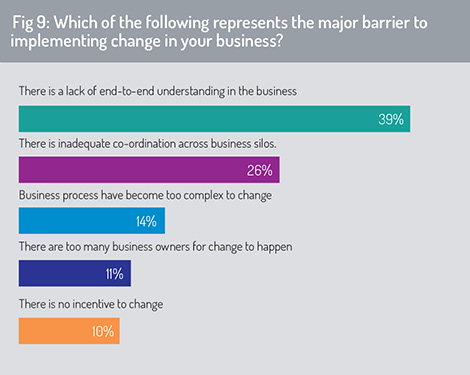 In figure 9, respondents were asked to select one of five factors that represent the primary obstacle to efficient change management. The most popular answer, accounting for 39% of responses, was “there is a lack of end-to-end understanding in the business”. The second-most popular response was “there is inadequate co-ordination across business silos”, with 26%. Both of the answers point to the general problem of managing complex projects in which many different employees and departments are required to implement changes.

To develop this point further, respondents were asked, in Fig 10, to select the single most important factor constraining the fund industry’s ability to change (from a list of six options). The most popular choice, accounting for 31% of responses, was “failure to see a broader picture and long-term results”. Close behind, with 26% of responses, was “human resistance to change”. These findings suggest we should not underestimate the influence of behaviour and psychology in explaining why transformation can be hard to achieve.

Figure 11 echoed an earlier finding by reiterating the importance of resources for change management. When respondents were asked to say what was the greatest barrier to change within their business, the most popular response (27%) was “we do not have the resources”. It is perhaps noteworthy, given the competitive pressures within the funds industry, that 21% of respondents indicated that they do not have satisfactory incentives to change. A further 19% said that “it is not clear where we are going as a business”.

In contrast, 21% of respondents indicated that they did not have significant barriers to implementing change.

Teamwork
We have examined a lot of the obstacles. What are the solutions? In figure 12, respondents were asked to select, from a list of possibilities, which courses of action would be most effective in helping humans deal with change. The most popular option, accounting for 40% of responses, was “we need better communication within the organisation”. The next most popular responses were “we need to identify the new skills we need”, which attracted 23% of responses, and “we need clear retraining programmes within the business”, which got 15%. Respondents seemed keen to emphasise the importance of information-sharing to achieve common goals.

The next question (figure 13) sought to determine which parties within an organisation should initiate transformation. Survey respondents suggest that responsibility should not be lumped on senior management (selected by 29% of respondents to this question). Instead, “everyone in the organisation – it is a matter of culture” was by far the most popular answer, accounting for nearly two-thirds (65%) of responses. Again, our respondents have highlighted that effective change management within an organisation is a matter of collective responsibility. 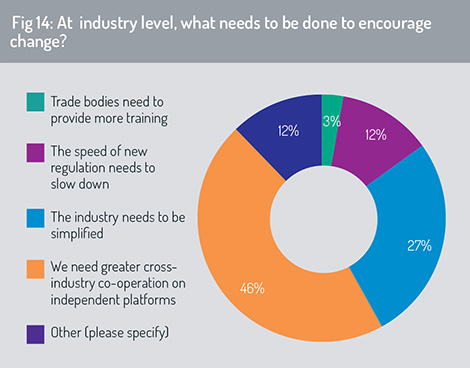 What about at industry level? In figure 14, respondents were asked to choose which of several factors would be most helpful to encourage change. The importance of teamwork was underlined once more. Nearly half (46%) of respondents opted for “we need greater cross-industry co-operation on independent platforms”, which was the most popular response by a significant margin. Some respondents had alternative suggestions.

Those who selected the option “other” were asked to say what they had in mind. Their proposals included “more standards across all fund topics” and “need more transparency to industry metrics to understand where money and opportunity is wasted” (see the appendix for a collection of anonymous quotes from respondents).