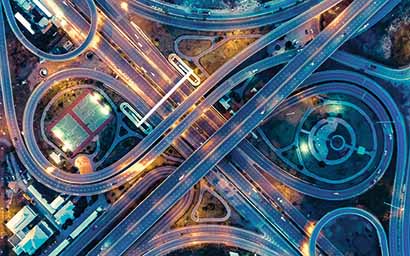 Major building programmes to boost ailing infrastructure could reduce the risk of recession in the near term, says Andrew Harmstone of Morgan Stanley Investment Management.

While financial markets have been jittery in the past few months, fiscal stimulus from a number of regions including the US and China could put the global economy ‘on the road again’. Major economies are looking to reduce the risk of near-term recession and the measures taken would potentially create a cyclical upswing in infrastructure investment in the second half of 2019, continuing into 2020.

The long-term goal of reducing leverage and improving industries’ efficiencies has resulted in an economic slowdown and rising unemployment in the world’s second-largest economy, China. The situation has been exacerbated by trade tensions with the US, leading to some signs of social unrest.

However, to jump start the economy, China is initiating a two-pronged fiscal stimulus programme focused on tax cuts and local government debt-financed infrastructure projects. This also reflects China’s strong commitment to stabilising its economy in the short term.

Meanwhile, in the US, the probability of ‘building bridges’ – those between leading political parties – is high. Decades of neglect have left the country’s infrastructure in desperate need of an upgrade, garnering a D+ rating from the American Society of Civil Engineers in 2017.

Despite a severely divided Congress, an area where a bipartisan agreement seems plausible is infrastructure spending. Democrats and Republicans have proposed major infrastructure plans that differ in detail, but with 87% support from likely voters in both parties, we expect a joint bill to be introduced during the summer.

And in Europe, where there is much ageing infrastructure across the Continent, we estimate that governments will likely adopt stimulus programmes of approximately $47 billion (€42 billion) cumulatively. However, only some of the new spending will be on infrastructure. Spending levels will differ among eurozone countries, with Italy and Germany leading the way. 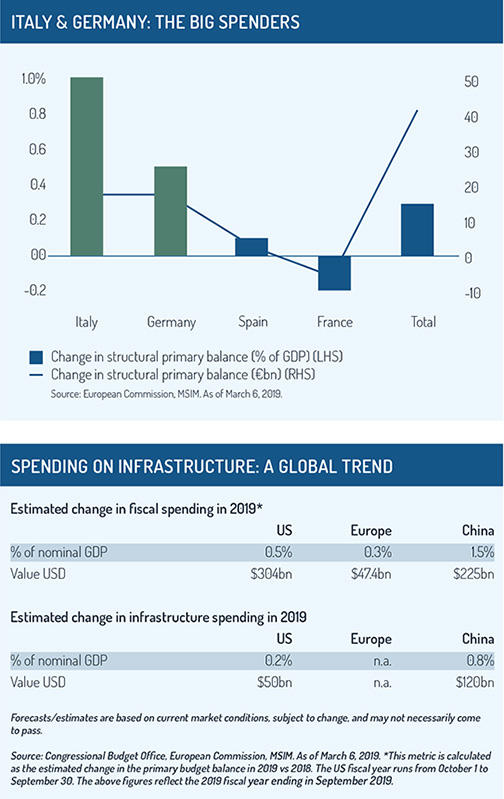 Italy increased its structural primary surplus by €18 billion and Germany runs a surplus, with leeway to stimulate. By contrast, protesters in France led the government to scrap planned tax increases, and the Spanish government failed to get its budget through parliament. Such pressures may lead to more expansionary measures, incremental to the projected net $47 billion.

Then there is Japan, where authorities will reportedly raise VAT from 8% to 10% in October 2019 to help finance ballooning social security costs. The VAT was last increased in 2014, causing a noticeable slowdown in the Japanese economy, a risk the government will try to pre-empt.

To offset the tax increase, a record budget for 2019 will include 2 trillion yen (€16 billion) to be spent on measures such as shopping vouchers and state subsidies to encourage cashless transactions. It also includes about 1 trillion yen designated for public works – essentially infrastructure projects, according to local press quoting government sources.

Forecasts/estimates are based on current market conditions, subject to change, and may not necessarily come to pass.

Winners, losers – and risks
For equity investors, China’s experience with its recent stimulus programme suggests the energy, materials and industrials sectors may have the most upside. We are also constructive on industrial metals due to their importance to infrastructure.

While short-term weakness in economic data and a dovish Federal Reserve may cause bond yields to drop, our view is that the return to owning longer-dated bonds relative to the risk remains unattractive. The flatness of the yield curve means that any evidence of renewed growth – due, for example, to a significant US infrastructure stimulus programme – could lead to a sharp rebound in yields and negative returns to longer-dated bonds from current levels. Fiscal stimulus would also suggest greater bond issuance, which would likely drive yields higher.

However, there are some major risk events that could change our outlook. These events – which complicate an otherwise generally positive outlook for infrastructure – have potential binary outcomes. They include the US/China trade agreement, US tariffs on European imports and Brexit. Negative outcomes of these binary risk events could temporarily set markets back and dampen the enthusiasm for stimulus.

We would use these more as buying opportunities than commitments to negative positions.

The renewed focus on infrastructure is a global trend. New projects – in the form of roads, bridges, transportation hubs, rural development and other initiatives – are likely to minimise the threat of a recession. In fact, we think it could get the global economy on the road again, headed toward a meaningful cyclical upswing going into 2020.