Nicholas Pratt considers pension fund outsourcing of broader back and middle-office operations to custodians, while Marks & Spencer's pension scheme talks about its approach to asset servicing.

The trend for asset managers to outsource a growing number of their processes to asset servicers – mainly custodian banks – has been a valuable source of revenue for providers. So it is unsurprising that many custodians are looking to increase the services they offer to pension funds.

According to Ian Hamilton, head of asset owners at State Street, a driver for outsourcing is that pension funds are including more alternative and emerging market assets in portfolios. This is leading them to consider their governance structure – particularly more analytics to monitor these investments.

This has influenced the type of services they are seeking from their custodians. “Performance measurement has long been a traditional service provided by custodians but pension funds are now looking for ex-ante risk services, not just on a portfolio basis, but across the entire pension scheme.”

Custodians are also seeing interest in independent collateral management, says Hamilton. Traditionally, this was executed via multiple asset managers but pension funds are now considering whether it could be more efficient to have a centralised collateral management service via a single custodian.

“The key thing we have is data – all the clients’ data across all of their investments across the entire pension scheme,” says Hamilton. “It is how we provide that data back to them, primarily through analytics, that enables the pension funds, their trustees and their consultants, to make better investment decisions. That is why we have invested in our online platform and analytics service to provide a central hub for pension funds to use this data.”

A greater focus on governance, creditworthiness and risk management means that pension funds are looking at custodians differently, says Scott MacDonald, head of pensions, insurance and sovereign wealth strategy at RBC Investor Services. “In this context, we are having a much broader conversation over the extent of services that we can offer.”

There are a number of value-added services such as foreign exchange, performance and risk measurement and securities lending that are being increasingly outsourced by pension funds. There are also larger pension funds that have insourced their investment process and are looking to custodians to provide analytics to support this, says MacDonald.

“The next generation of services will be increasingly strategic and will be based on the universal banking capabilities that a custodian has – custody, treasury, liquidity management – and how they can be used to help the evolution of the pension fund rather than a simple mandate for custody. For example, if they want to invest in real estate, what are the types of services that a custodian could provide? Could this include some advisory work that is then followed up with custody services?”

CUSTODIANS
A custodians’ provision of analytics is based on the premise that by virtue of the custody, administration and accounting duties they perform, they hold all of a pension fund’s relevant data.

Though in most instances pension funds employ a single custodian, there are some that through growth of the fund and a greater focus on risk management now employ two custodians or more.

Not all European markets have the same arrangements for using custodians.

In Germany, pension funds use a master-KAG, a capital management company that not only appoints the custodian but also shares several of the administrative and accounting duties. Consequently, when seeking a unique reporting or analytics service, as well as any other value-added services such as foreign exchange hedging or securities lending, the pension fund can go to either the master-KAG or the custodian.

According to one Germany-based pension fund manager, this adds some competition to the process as well as a level of verification in terms of fund valuations.

The same pension fund manager, who declined to be named, believes the outsourcing market in the pension funds industry is already quite developed and does not anticipate any great surge in demand for more services from custodians.

This is not surprising given that asset managers are under incredible pressure to produce returns while managing a growing cost base and investing in new technology. 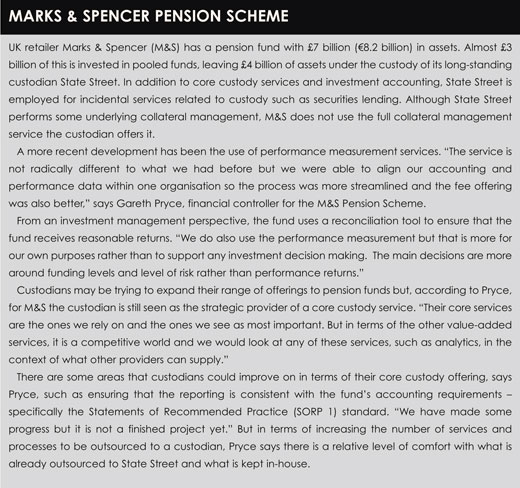 It is different for pension funds, says Pearce. “They are sitting on a sizeable amount of assets and the provision of any additional capital is down to the [sponsor]. At the same time, they can employ actuarial consultants for the investment process. Ultimately, the primary responsibility of the pension fund manager is to ensure the security of the pension plan.”

OPPORTUNITIES
Appointing a custodian to deliver custody and administration across a fund that employs multiple assets managers, and to provide data services, has been an established practice for some time rather than a new development, says Pearce. And while there is an inexorable demand for more detailed analytics, this has been the case for nigh on 20 years.

Where there may be room for the development of new services in the future is around defined contribution schemes rather than the defined benefit schemes that make up 90% of the asset pool in the pension markets of the UK, the Netherlands, the US and Scandinavia.

“There is a more expansive role that the custodian or asset servicer could play in the defined contribution space, says Pearce. “We have been looking at opportunities to offer support to self-invested pension plans and new investment vehicles that could be made accessible to someone in a defined contribution scheme.”