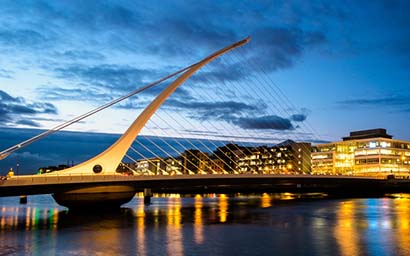 Irish fund management companies have until the end of March to devise their plan for CP86, the Central Bank of Ireland’s governance framework. In a webinar hosted by Funds Europe, a panel of experts outlined the critical elements in the framework and what firms should consider when putting their plan together.

The Central Bank of Ireland’s (CBI’s) governance framework, CP86, was introduced in 2016 and took effect a year later. It was thrust to the forefront of fund managers’ minds when a ‘Dear Chair’ letter published by the CBI in October 2020 criticised the industry for failing to meet its requirements fully.

The letter highlighted three areas of concern – risk management, oversight and resourcing. The CBI set a deadline of March 31, 2021 for firms to develop an action plan stating how they would meet the requirements.

Michael Hodson served as the CBI’s director of asset management up to October 2020 and is now an independent executive director. He explained why CP86 was introduced as well as the purpose of the letter. “A big reason for its introduction was the success of the Irish funds industry,” he says.

In 2006, the assets under management (AuM) for Irish funds was €728 billion. By the end of 2020, it had reached €3.2 trillion. That growth brings more scrutiny, said Hodson. “A combination of the CBI’s own work and seeing some large firms with minimal resourcing, individuals with an excessive number of directorships, and more questions being asked internationally showed that a more robust regime was needed.”

The Irish funds market is also dependant on the delegation model, whereby a fund’s portfolio managers may be in one jurisdiction while its management and oversight functions reside in another. The CBI recognised the importance of the delegation model, said Hodson. “Demonstrating that there are robust oversight and governance measures and suitably qualified staff in the jurisdiction goes a long way to supporting delegation.”

Yet the CBI felt sufficiently concerned about the application of the framework to issue the Dear Chair letter. “It follows a well-trodden path that is to follow up any substantial body of work with observations on both good and bad practice,” said Hodson.

The international context behind CP86, principally the demand of EU regulators to see more substance in the funds market, was highlighted by Declan Casey, head of legal and regulatory affairs at Irish Funds. “This has been the direction of travel among European supervisors for some time. Brexit has accelerated this trend and led policymakers to consider whether they are overly exposed to a third country and if there is infrastructure or expertise that lies outside the EU and which could create pressure at times of market stress,” he said.

“Our view is that the regime in Ireland puts a good governance overlay on delegation. Some jurisdictions may call it gold-plating but I think it has served us well and will position Ireland appropriately in the debate to come on the review of AIFMD.”

Before the AIFMD Review, though, is the March 31 deadline for CP86 action plans. According to Eoin Motherway, head of Ireland for AMX, most firms reviewed their options in the wake of the Dear Chair letter – to establish their own management company, to go with a third-party ManCo, adopt a platform or ‘complete infrastructure’ service, or exit the domicile. “That reconnaissance work has now been done and firms are putting their action plans together so that they can be disseminated and ultimately passed by the boards by the end of February,” he said.

There is no explicit deadline for executing that plan, but there is a natural expectation that it should be concluded by the end of next year. “The smart play would be to have a baseline plan ready for March. As you go through the implementation, you may deviate or pivot from that plan based on technical considerations, but at least have that initial plan in place,” said Motherway.

There was a flurry of recruitment following the Dear Chair letter, said Anne Keys, managing partner of recruitment firm The Panel: “Unsurprisingly, the most in-demand positions were the delegated persons (DPs) such as compliance, risk, investment management, distribution, capital and financial management. And of those roles, it’s really the governance roles that are most in demand, along with legal people and INEDs as well as country heads and support staff for those senior positions.”

So far, Keys added, there is no evidence of a skills shortage for any of these roles. “Every position that has been registered has been filled, which is encouraging for those firms looking to recruit, but I would manage clients’ expectations in terms of the time it will take to fill some of the positions, especially the governance roles Also, the central bank pointed out that some firms are not appointing DPs with enough experience, so there will be a war for talent in some roles, especially governance. You also have to retain your talent and you have to sell yourself to candidates, because they have a lot of choice. This includes demonstrating a commitment to Ireland.”

As well as seniority, the Dear Chair letter mentioned diversity. Ireland’s financial services sector are currently very male-dominated: up to the end of 2019, men held 87% of pre-approved control functions (PCFs) and 75% of risk and compliance roles

So, while diversity is rightly a focus for firms, there will not always be a diverse pool of candidates, said Keys. “As someone who runs a recruitment firm and is co-chair of 100 Women in Finance, I understand the importance of diversity, but I have to be realistic with my clients about the talent pool in Ireland and manage expectations. As an industry, we have to work on this and build a more diverse marketplace,” said Keys.

The CBI also has the power to reject appointments and scrutinises every PCF application, so it is critical that firms take recruitment seriously. “It is highly embarrassing to the firm and detrimental to an individual’s career to put forward someone who is not at the right level,” said Hodson.

Nor does Hodson underestimate the responsibilities of an INED or what he expects of a firm. “I would want to see that the firm has resources in Ireland and a strong CEO. I want to see that the firm has met the CBI’s expectations of CP86. The risk to my reputation and to any future positions of working for a firm that doesn’t meet those expectations is just too great.”

In addition, the CBI’s proposed Senior Executive Accountability Regime and its focus on fitness and probity could raise the stakes in terms of personal accountability for senior management, including INEDs and DPs.

Unlikely to leave
The panel also discussed the wider implications of CP86 for Ireland as a funds domicile. Firstly, said Casey, it is unlikely that many firms will leave Ireland as a result of the enhanced substance requirements. “What we will most likely see is the self-managed firms move to third party providers and those with large fund ranges will establish their own management company. Any entity that leaves Ireland will probably leave Europe, because I don’t see any European jurisdictions offering anything different to Ireland, particularly given increasing convergence.”

And while Ireland will not necessarily become the London of the future, it will continue to evolve from a servicing centre focused on back-office functions to one that incorporates more middle and front-office roles. Furthermore, the firms that have moved to Ireland in the past two years may currently be in set-up mode, but they do plan to expand their operations and Ireland has to be ready for that.

In summing up, the panellists each stated their priorities for their action plans. Have a plan that is well thought out and will pass muster with the Central Bank, and don’t delay in your hiring plans, because the first to market will get the best pick of the market. “You have to move fast and you have to move now if you want your preferred solution, or you may be left with a choice that wasn’t your preference,” said Motherway.

Listen to the Funds Europe/AMX webinar on our Webinars Channel.