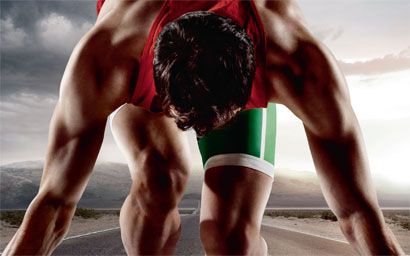 Rarely has the publication of an EU financial text been so keenly anticipated as Delegated Acts under MiFID II. Nicholas Pratt looks at one of the main issues, the unbundling of broker research costs.

The European Securities and Markets Authority (Esma), the body tasked with the unenviable task of turning the European Commission’s directive MiFID II into a workable reality, has published the long-awaited Delegated Acts, which detail the requirements for the updated MiFID directive.

Following its publication, it is clear that commission-sharing arrangements (CSAs) will live to fight another day, thereby temporarily settling an unresolved issue of unbundling broker research fees from execution fees.

The crux of the issue was whether Esma would call for an end to the use of CSAs, whereby managers set aside some of their execution payments to cover the cost of research, and insist that managers either pay for research out of their own pockets rather than from client order flow, or through new ‘research payment accounts’ (RPAs). For many large asset managers this was an Armageddon scenario because of the operational changes involved.

In the end, though, Esma ruled that CSAs would be allowed to continue in a modified form where the payment was unconnected to execution volume. The text says: “The research payment account should only be funded by a specific research charge to the client which should only be based on a research budget set by the investment firm and not linked to the volume and/or value of transactions executed on behalf of clients.”

Observers, such as Juan Pablo Urrutia, who is a general counsel at agency broker ITG, says this is a victory for the French regulator, the Autorité des Marchés Financiers (AMF).

France has a large asset management industry with many large and mid-sized mainstream players and French asset managers were among the most vocal opponents of the original proposals to unbundle research fees from broker fees.

For the UK’s Financial Conduct Authority (FCA), which is in favour of unbundling, the Delegated Acts have been less of a success, says Urrutia. “The previous incarnation of the FCA [prior to the departure of Martin Wheatley, chief executive, last year] would have been very unhappy with this result. However, this is not a view that the current FCA management would necessarily share.”

MiFID II is a directive, which means it has to be transposed by countries at a national level and is subject to minimum harmonisation rules. Member states can put more stringent rules in place if they wish. Tellingly, the FCA published a thematic review at the same time as Esma published the Delegated Acts and it remains to be seen whether the FCA will go for a gold-plating of the MiFID II rules.

The FCA will issue further consultation in September, by which time the new chief will have taken position, but regardless of the regulator’s choice of action, the FCA will be disappointed it was not able to impose hard unbundling on the rest of Europe’s asset management industry, says Urrutia. “The FCA has been very vocal on this issue,” he says, adding that the regulator pushed for hard unbundling.

NOT A PERFECT ‘WIN’
For the French asset management market, Delegated Acts is a win, but not a perfect win. The CSAs have received a stay of execution rather than a full reprieve and there are some serious operational and governance issues that asset managers will have to address. The Delegated Acts text suggests that senior management will have to invigilate and audit the research payment process.

“If I was an asset manager, I would pay close attention to this. Some senior management may feel that they do not have enough control over the process to continue with it and will simply decide to pay for research out of their own money,” says Urrutia.

The publication of Delegated Acts also produced a sigh of relief due to the numerous new products and services that have been developed in anticipation of research unbundling, and due to a greater use of independent research providers. 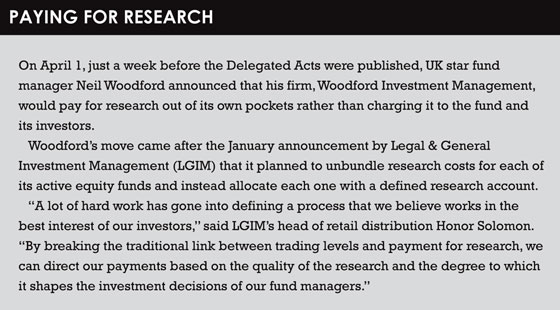 One of these services is RSRCHXchange, an online marketplace for institutional research. “It was a good outcome because there were no nasty surprises,” says co-founder Vicky Sanders. Of course there is still the task of transposing the rules for each member state, the deadline for which is July 2016, but asset managers can now start to define their strategy for purchasing and using research and the technology they will need to put in place. “It releases the industry from the starting blocks,” says Sanders. “January 2018 may still seem like a long way away, but there is a lot of work that needs to be done.”

This work includes setting up research budgets, quality metrics, audit trails, governance and oversight. Sanders hopes that asset managers will take MiFID II as an opportunity to review their use of research – an aspect of the investment management process that has been left relatively untouched by technology developments. For example, a number of firms still send and receive research by email, a practice Sanders says is not fit for purpose given the MiFID II rules.

Ultimately, says Sanders, asset managers will see the exercise as something that goes beyond compliance. “They have to ask why they are buying research in the first place. It is to improve their performance. And when they have a big budget for this, they want to show that they used their money wisely.”

Some managers may even take this all a step further by deciding that they will simply pay for research themselves. “I think MiFID II is a great opportunity for the buy-side. It is not about using it for positive PR and getting on the front foot, it’s not being reactionary.”

PRODUCT GOVERNANCE
In addition to broker research unbundling, MiFID II also addresses the issue of product governance and making fund managers more accountable for the products and vehicles their investors purchase. But while some clarity has been produced on the former, there is still a dearth of detail on the latter, says Rob Swan, head of Data Services for Calastone, a software firm.

In principle, the changes to MiFID II will see a shift in the responsibility for investor protection, from the pre-sales obligation of fund providers to the ongoing responsibility of the fund manager, but it is not clear how exactly this will be achieved. “We wanted every fund manager to realise the size of the task in collecting data but we still don’t know how much information is needed, and fund managers still feel that they don’t have enough information about the final directive to get fully started on projects,” Swan says.

The next part of the Delegated Acts should be published in June but there is no guarantee this will be the case, says Swan. “We only have the example of MiFID I and that was delayed by four years.”

For providers, MiFID has been their best friend and their worst enemy. Swan adds: “We have a solution that can help with MiFID II obligations, but firms are waiting until the final rules come out. It’s a big ask.” More worrying for Swan is the fact that some managers are still hoping to find ways to avoid any MiFID II obligations when they should embrace inevitable change and use it as the basis for gaining a better understanding of their business and their investors.

“Some fund managers are nervous, some are still looking at ways they can circumnavigate the rules. You should be doing this anyway, regardless of regulations. You should not be a slave to a regulatory timetable that is unreliable at best. You should look at it as a much better way to run your business.”