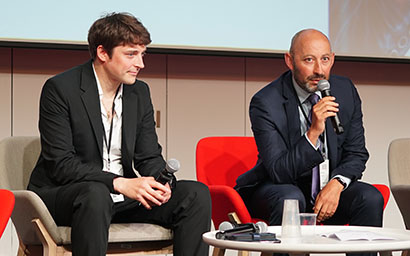 If a poll taken at the SGSS European Investor Summit is indicative of the wider community, around 40% either already, or expect to, have an exposure to cryptocurrencies in the next two years. However, slightly more – 46% – said they had no such plans. But for the marketplace in wider digital assets, 55% expressed interest.

Currently, there are $150 billion (€142 billion) of assets under management in 1,200 professional crypto funds, according to Ivan de Lastours, blockchain lead at Bpifrance, the French national investment bank. This is evenly split three ways between 800 crypto venture capital funds including A16z and Pantera, hedge funds, and asset managers such as Citadel BlackRock and Brevan Howard.

“It is already a professionalised market and we expect adoption rates to grow because of the capital as well as the talent going into the space,” he says. “It has different rules, the way it interacts, and tech stack, but we definitely consider crypto an asset class.”

The evolution of the market will partly depend on the talent it attracts, but Lastours notes there are many software developers who are willing to leave traditional tech and banking jobs to “contribute to this new revolution. They believe that this is too big of an opportunity to miss out on.”

Investors, though, have been spooked by the speculative nature and gyrating prices. Recently bitcoin, the world’s biggest cryptocurrency, traded just under the symbolic level of $20,000 for the first time since December 2020. It has lost almost 60% of its value this year and 37% in June alone, during the cryptocurrency sector’s latest meltdown.

Dollar connection
Meanwhile, the collapse of TerraUSD stablecoins also rocked the market. These coins failed to keep their dollar connection. The dollar connection was a security blanket for many investors. One of the issues was this so-called “algorithmic” stablecoin attempted to maintain a value of $1 using code rather than cash.

In many ways, the volatility could be seen as par for the course. “It is not a perfect square,” says Lastours. “Cryptocurrencies are worth between $1 to $2 trillion and there will be ebbs and flows. However, they are five times less volatile than gold, nearly 400 times less than global wealth and between 500 to 1,000 times less than derivatives markets, which is the real market for investment banks.”

Although recent turbulence in cryptocurrency markets may have a short-term impact, Lastours does not believe this will dent the long-term fundraising success of the sector.“

If you are at the late stage today, then it can be challenging as valuations would be hit and you would have to allocate more shares. But at the early stage, there is so much dry powder,” he says. “We expect to see continued interest from venture capital funds who were raising $1 billion a week last year. However, it is good for everyone in the ecosystem to know the limits. This is not the first, nor will it be the last, grey swan.”

The market could benefit from tighter regulation and a more mature ecosystem, though. These two needs were highlighted as major stumbling blocks in the second poll taken by attendees at the European Investor Summit.

Advanced stage
But progress is being made. Lastours points to France, which is at an advanced stage in relation to crypto, with a robust framework that includes legal definitions, accounting processes, and tax categories. This taxonomy has been incorporated into the European Union’s Markets in Crypto-Assets (MiCA) regulation, which is making its way through the legislative system.

There are hopes MiCA could be approved in the coming weeks. First introduced in 2020, Mica could put European regulators at the forefront of supervising cryptocurrencies by creating unified rules across the bloc. It aims to address issues such as investor protection and crypto’s impact on financial stability.

There are, though, a few issues to hammer out. For example, EU countries and the EU Parliament still need to agree on whether to include non-fungible tokens – known as NFTs – and how to regulate big stablecoins, the division of supervisory responsibilities, and the introduction of a ceiling to limit stablecoins’ usage as a payment method to prevent currency substitution. Debates and discussions also revolve around crypto’s environmental impact.

While a more rigorous regulatory framework will provide confidence it is only one part of the puzzle, according to Lastours. “There needs to be a balance between regulation, technology and token economics, which is economics linked to digital assets.

“If one part is missing, everything falls apart.”

This article is published in association with Societe Generale Securities Services. See more conference debates in our digital report.