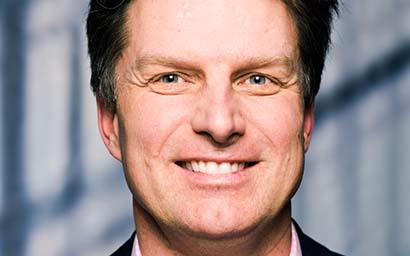 Integrity is the most important characteristic for joining the asset management industry, according to Patrick Thomson, JP Morgan Asset Management’s (JPMAM) chief executive for Europe, the Middle East and Africa (Emea) since 2017. It was also one of the most valuable lessons he learned in the British Army, he says.

Another was resilience, which has pretty much been the keyword of the pandemic so far. Soldiers often have to put up with “pretty miserable” conditions, he explains.

“When you lead your first platoon, that is a seminal moment for life,” says Thomson, who joined JPMAM in 1995 after five years of military service. “You look behind you and there are 30 individuals looking at you, thinking ‘What do we do now?’ while you are in this environment that is not very friendly.”

He adds: “You have to do things that are very demanding. You’re on operations and away from your family. You need a certain degree of resilience to be able to cope with that.”

That resilience has been helpful in terms of putting people’s issues and challenges into context. Thomson says that this is about being very sympathetic with people who have “real challenges” to face.

The transition from the military to asset management wasn’t easy, according to the chief executive. “There was lots of industry jargon to wade through and demystify,” he says, so that as a result, he is passionate about improving the level of general understanding about the funds industry.

He is also involved in JPMAM’s military internship programme. “Having an internal network of ex-military, where you can learn from one another, was an invaluable part of my growth and development in helping to navigate the transition.”

Recent research by JPMAM found that European workers want to invest a large part of their savings but lack the confidence to take the plunge.

Keeping cash in bank accounts for emergencies was the most common way people managed their money, according to the survey of more than 5,000 people across ten European countries. Three-quarters of current investors, as well as savers contemplating investing, said they felt a constant need to be vigilant and pressure to keep an eye on their investments.

JPMAM released the results in early June as it promoted a new website that aims to be a one-stop shop for DIY investors, and to “support conversations between professional advisers and their clients”. At the time, Thomson said the firm was committed to “providing all the tools needed to help savers understand the principles of successful, long-term investing, and to help them build effective and resilient portfolios”.

Navigating crises
Two years before the Covid-19 outbreak, JPMAM had run various risk scenarios, such as what could happen in the event of a run on the corporate bond market or liquidity issues. Thomson points out that one of the first things to disappear during a crisis is liquidity.

“We are very informed by crises of our past [ but] this is totally different,” he adds, noting that the firm’s performance has been solid over the past year.

As of the end of March 2021, JPMAM’s global assets under management stood at $2.4 trillion, while in Emea they reached $560 billion. According to data from Morningstar, the firm was also among the top performers in terms of active inflows for 2020.

What worries Thomson most about the coronavirus crisis is the human dimension: how employees are coping.

“This is uncharted territory for us all. How do we make sure we provide as much support and help to our employees as we can? It’s not lost on anyone how challenging this is.”

As lockdowns kicked in last year, the firm pivoted quickly to working from home. “When I look at the investment we’ve made in things like digital technology, that’s really when it came home to roost, both in terms of trading and executing, and client engagement.”

He says technology will play a key role in defining the winners and losers as the industry goes through the next period of consolidation.

“Only the strong will survive – and the strong are people who’ve got scale and who can invest in the technology.” There are, he adds, “probably too many asset managers... and clients want more from their asset managers at a cheaper price”.

Firms need to make sure their investment process is as efficient as possible and communicate in a way that clients want, says Thomson, so they know what their money is doing. In his view, the answer lies in technology.

A “critical” issue
Like all asset managers, JPMAM is confronting the ticking timebomb of pensions. It’s a “critical” issue, according to Thomson, and he feels the private sector has a crucial role to play.

The pensions that the private sector provides need to be sustainable not just in terms of the income they provide as people live longer, but also environmentally. On that basis alone, says Thomson, the asset management industry has a very clear need to fulfil.

“One of the benefits of the crisis, you could argue, has been a focus on vulnerable parts of the community, such as old-age pensioners. “If you take somebody who’s retired, every pence of income that can be generated of their assets counts, because that’s what they live on. That’s how they pay their medical bills. That’s how they survive.”

People have also become more aware of the impact of climate change since the outbreak of Covid-19 and want their voices to be heard, he says. “ESG has become an extraordinarily powerful, dominant force, and the change has come so quickly.”

In their fiduciary role, asset managers have a responsibility to invest in a way that takes account of their clients’ best interests, Thomson says. “Having ESG integrated in the way we invest is not only the right thing to do for the world, but it’s also going to produce better outcomes.”

Despite the many challenges ahead – and the “ambitious” climate goals – he remains optimistic about the role asset management can play in allocating capital meaningfully.