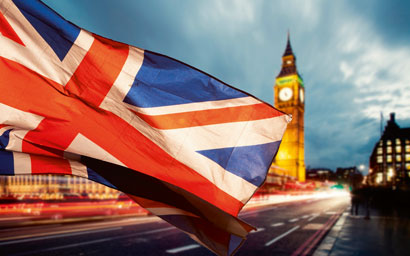 A year after the UK’s Brexit vote, a survey reveals what fund industry executives expect will happen to the UK asset management industry and which countries stand to benefit from the diaspora of business.

More than half of asset management professionals feel that the UK has lost its attractiveness as a fund domicile since last June’s referendum that led to the country deciding to leave the European Union.

That was one of the main findings of a survey, sponsored by RBC Investor & Treasury Services, of over 100 executives attending last month’s FundForum International event in Berlin.

The survey gives an insight into how funds industry executives think the industry will evolve when the UK leaves the EU.

Among the key findings were:

Stripping out those who were undecided, the headline finding was that 60% of respondents to the survey say the UK has become less attractive as a fund domicile because of the Brexit poll – though 40% said it has not. 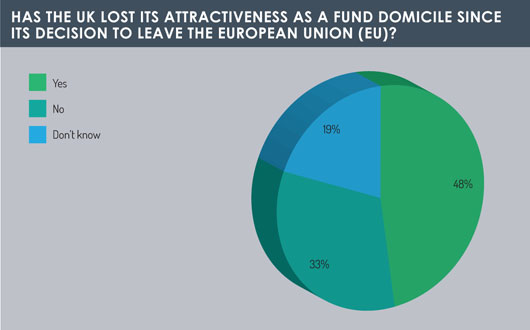 This finding broadly reflected another recent survey, this time of 1,428 investment professionals around the world and carried out by the CFA Institute, which found many UK respondents felt Brexit would make
the UK market less competitive and that firms with a strong UK presence would reduce it.

Notably, this month Jamie Dimon, the worldwide boss of JP Morgan, said the Wall Street bank would initially move several hundred jobs from London, but that the final number would depend on the demands imposed by EU regulators and politicians.

Lost passports
Firms might avoid moving should passporting rights be allowed, and only a quarter of respondents to the RBC Investor & Treasury Services survey expected the UK to lose passporting rights. These rights allow UK-based firms to sell financial products in other EU member states without having to open local offices. 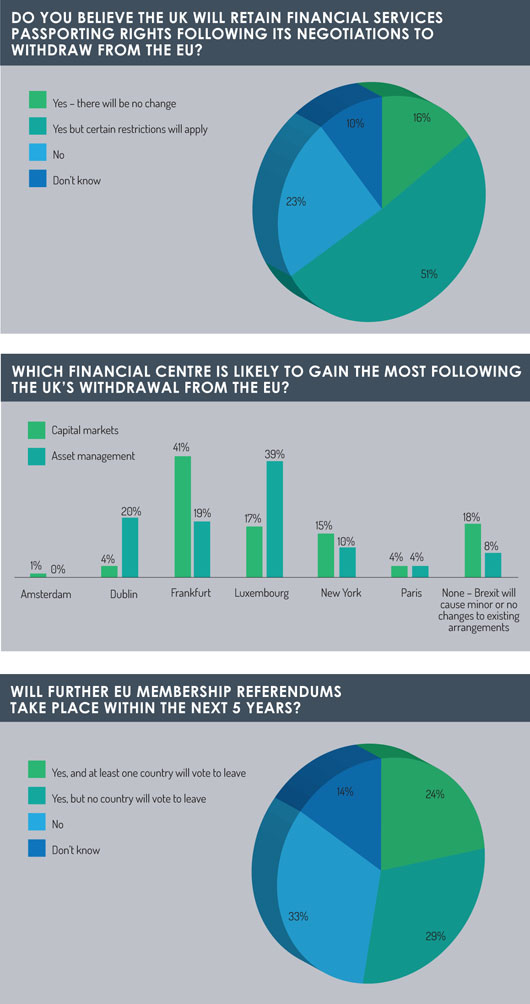 Again, taking out those who were undecided, 18% of respondents expect passporting rights to be retained post-Brexit while the majority (56%) say that restrictions might apply.

The executives at FundForum were also asked what amounts to a ‘$64,000 question’ for the cross-border funds industry: Which European financial centres would benefit most from Brexit?

Perhaps not surprisingly, a substantial 39% say Luxembourg would be the main beneficiary for asset management.

Just 8% think there would be no significant move of business from London to rival financial centres.

Although Dublin fared better than Paris, Amsterdam and Frankfurt in the survey, the city only received half as many asset management votes as its rival Luxembourg.

Surprising results
The UK’s 2016 Brexit vote was a shock to many, even those who voted for the UK to leave the EU. It appeared to show just how much strength populism had gained. And after the election of Donald Trump to the US presidency, the Dutch and French elections were expected to only increase the momentum of the populist train. 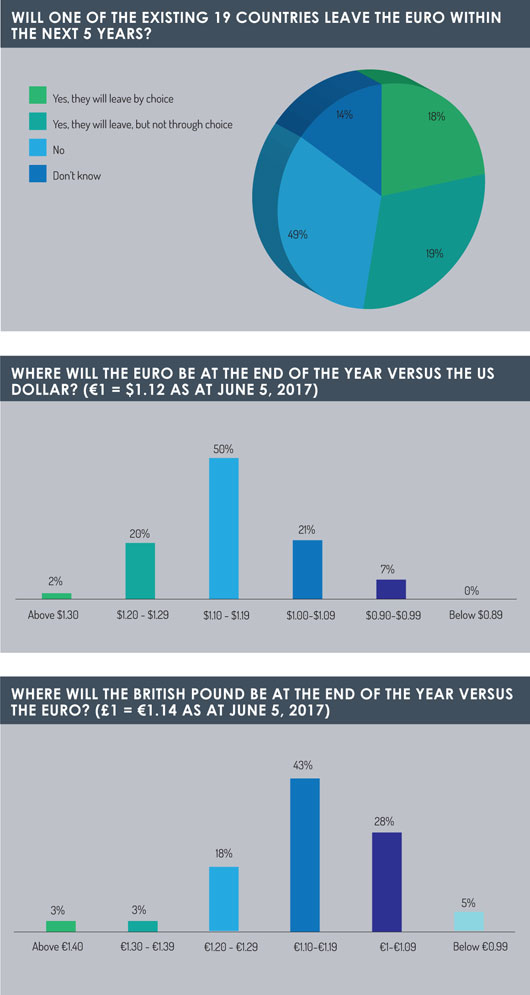 Yet they didn’t. The two elections resulted in the Netherlands’ ruling party regaining power, and a new political party – though one with a relatively mainstream outlook – being elected to in France.

At the time of the Dutch elections, Roelof Salomans, chief strategist and head of allocation at Kempen Capital Management, said: “Populism’s advance has been halted for the time being. Part of the cloud of uncertainty is being lifted.” More recently, Yves Perrier, the CEO of Paris-based Amundi, Europe’s largest asset manager, said that the rise of populism had “not only been poorly analysed but greatly exaggerated”.

So, against this backdrop, it could be considered yet another surprising result that a high proportion of respondents to the survey at FundForum believe EU membership referendums would take place in other countries in the next five years and would result in at least one more member state voting to leave.

In partial contrast, nearly 30% of respondents say they expect further EU membership referendums over the next five years – but do not anticipate any more countries voting to leave. A third say no such referendums would be held.

Just over a third of respondents say that one of the 19 countries that currently uses the euro would stop using the common currency within the next five years. Roughly half of those think that one country will be forced out of the euro while the other half think that a country would leave the euro out of its own choice.

Currency bets
Executives were asked about the half-year outlook for sterling against the euro and most respondents feel sterling would not lose a great deal of value. Just over 40% say the pound would be worth between €1.10 and €1.19 – a prediction broadly in line with Barclays’ analysts, who expect the euro to be at €1.18 against the pound at the year end.

The survey at FundForum was taken days after the UK general election that resulted in the governing Conservative Party becoming a minority administration propped up by Northern Ireland’s DUP, a party which has just ten MPs at Westminster.

As Funds Europe was going to press, business leaders in the UK called on the government to ensure the country remained within the single market and customs union for as long a transitional period as possible. When Brexit finally does bite, the London School of Economics has warned that £3 billion of the UK asset management industry’s £24 billion annual revenues could move to another location abroad.