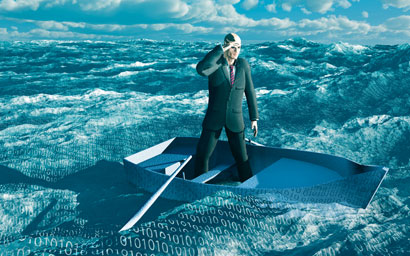 Despite its youthfulness, big data has rapidly grown to become all the rage in many sectors. The asset management industry is no exception - but is the hype justified? Kit Klarenberg investigates.

Big data loomed large at June’s FundForum International conference in Berlin. Several distinguished academics and professionals gave speeches on the topic, the buzzword persistently cropped up in discussion forums, and a number of dedicated panels examined its role in asset management in detail.

At one such event, when the time came for audience questions, a rather sheepish attendee sought clarification on a minor point – “What actually is big data?”

The query provoked gasps and giggles, but it was pertinent – if not vital – to ask it. Big data may have become a ubiquitous buzzphrase in recent months, but amidst the hype, few of its proponents have deigned to clarify exactly what the term means.

In brief, big data can be understood as combining vast swathes of raw structured (numerical) and unstructured (text) information created by individuals, businesses and governments. In theory, this amorphous corpus can be
mined for insights, which in turn deliver a competitive advantage to a business.

The firm, which specialises in collating information from unconventional sources, noted the surging popularity of Wayfair’s smartphone app, and the overwhelmingly positive sentiment towards the company on social media platforms many months prior. Its asset management customers were apprised accordingly, and those that capitalised saw their original investments jump by 20%.

Despite this success story, some may remain circumspect about the prospect of basing investment strategies on tweets and Facebook ‘likes’. Beyond helping spot the occasional riser or faller before the market does, they surely reveal little or nothing about the overall health of a sector, a country’s GDP or economic policy decisions.

However, it’s not just social media that’s leveraged by big data practitioners. Most firms in the field use an assortment of non-traditional sources to gauge the state of economies, and companies, around the world – some of which may surprise. Data specialist SpaceKnow recently launched a China Manufacturing Index, which analyses satellite snapshots of Chinese industrial facilities to theoretically provide a more reliable picture of activity and output than that offered by official GDP figures.

Others, such as VogelHood, analyse government records to secure advance intelligence on privatisation plans, government contract bids and mergers and acquisitions. All this might sound rather space-age, but in truth these innovations are inchoate – big data is still in its infancy.

“We’re just scratching the surface in terms of gathering and processing capabilities – big data will eventually completely alter the way we look at investments and client retention and acquisition,” Wall says.

SHOCK OF THE NEW
“By nine o’clock each morning, we have already created more data than mankind created from the beginning of time to the year 2000,” said Andreas Weigend, big data consultant to AliBaba and Goldman Sachs, in his address at FundForum International.

“Whether it’s through internet searches, video viewings or location detection via smartphones and tablets, every decision we make, somebody is watching.” 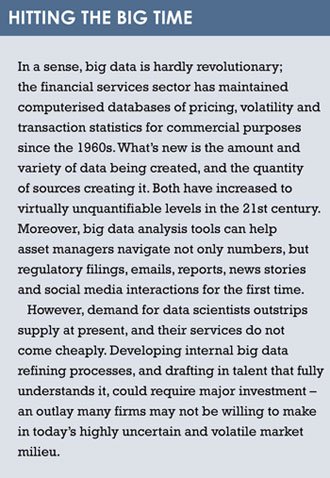 Weigend’s comments starkly illustrated the sheer scale of the data human beings produce, often unthinkingly, on a daily basis – and the ever-expanding pool of information asset managers can potentially glean wisdom from. However, they also highlighted big data’s intrinsic myopia.

In essence, while the volume of material available on the present is huge, the past is significantly under-represented in big data’s ever-expanding archives.

For example, big data could indicate a particular stock has performed well during every June within its data range according to certain metrics, suggesting an annual phenomenon – however, if that range covers only the past five years, no meaningful trend can arguably be deduced from it.

The overestimation of transitory tendencies and developments at the expense of the long term is already regarded as a major issue in asset management – will a reliance on big data further aggravate this delinquency? Anders Kirkeby, head of technical product management at Simcorp, thinks not.

“It’s simply a matter of having a clear idea of the kind of insights you want, before delving into the data – if you scour any data looking for patterns, you’ll undoubtedly find some, but it’s highly likely they won’t be patterns at all,” he says.

“Instead, start with a hypothesis you wish to prove or disprove – this asset will move in a certain direction in response to ‘x’ – and figure out what kind of data will validate or invalidate it, before running the query.”

Nonetheless, knowing what to look for, and where to look for it, remains a challenge. Kirkeby says insights generally have to be “teased out” by specialist statisticians, and without a dedicated data scientist team leading the way, asset managers may find big data falls short of delivering on its promise. The costs involved in hiring the requisite staff and resources to extract advantage from big data may account for why the industry is seemingly sluggish on the uptake.

“Some managers – a notable example being State Street – have established teams to experiment with big data, and find ways of working with it that will deliver practical benefits, but they’re a tiny minority,” says Cerulli Associate’s Wall.

What engagement there has been to date has largely been outsourced – firms obtaining insights from third parties, such as the aforementioned Thinknum and VogelHood.

Moving forward, Wall expects managers that seek to bring big data in-house will simply buy big data solutions off the shelf once they’re built, rather than cultivating them internally.

LEFT BEHIND
Given big data’s relative youth, and the potential associated risks, this hesitance is somewhat understandable. However, the industry could find itself left behind if it fails to embrace big data; some big data analysts have decided to quit playing middleman, and build investment businesses themselves.

Earlier this year, CargoMetrics, a US firm that mines worldwide ship movement data for global trade intelligence, stopped selling insight on to commodity traders and instead started capitalising on it. The company has set up its own hedge fund, and other firms could follow suit in the near future.

“Embracing big data will not guarantee high rates of business growth in the short term – but in the long term, an investment in the field could pay dividends, helping a manager gain a competitive edge, retain existing clients and protect its market share,” Wall says.

Evidently, a failure to act now means the threat of being superseded by new, more technologically advanced players becomes a very real one. Investors, both actual and potential, are increasingly tech-savvy – and asset managers would be wise to follow the example of the businesses currently leveraging consumer data most effectively.

Rachel Smith of Dassault Systèmes says: “Imagine if Amazon applied their current sales approach to investment products – ‘people who bought this fund also liked this ETF’. It wouldn’t be a surprise if retail investors flocked to them. When Alibaba launched a Money Market fund in 2014, it attracted $90 billion (€80 billion) in its first nine months, making it the fastest growing fund in history.”

However, it’s not merely in the realm of engagement that big data can play a role. Kirkeby says big data technology could become indispensable in helping managers deal with increasingly onerous compliance and regulation functions. The world over, fund providers are subject to high and rising reporting requirements, which represent a significant data challenge.

Agile operating platforms need to be in place to collect, aggregate and report data across multiple regulatory regimes, regions and formats in real time. Big data analytics could have an important role to play in how investment data is managed moving forward.

“A recent example of this trend has seen some firms signing up for big data-based services to capture environmental, social, and governance aspects of clients, investments, and partners alike, primarily as means to handle reputational risk.”

Ultimately, it’s clear asset managers must overcome their reservations about big data, before it’s too late. The market is already highly competitive, and will only become more so if and when big data aficionados opt to enter it. The prospect of promoting one’s business more effectively, and obtaining advanced insights into clients, operations and financial markets should be incentive enough.