Ireland’s funds industry continues to produce enuraging numbers for both the number and size of funds under management and administration. 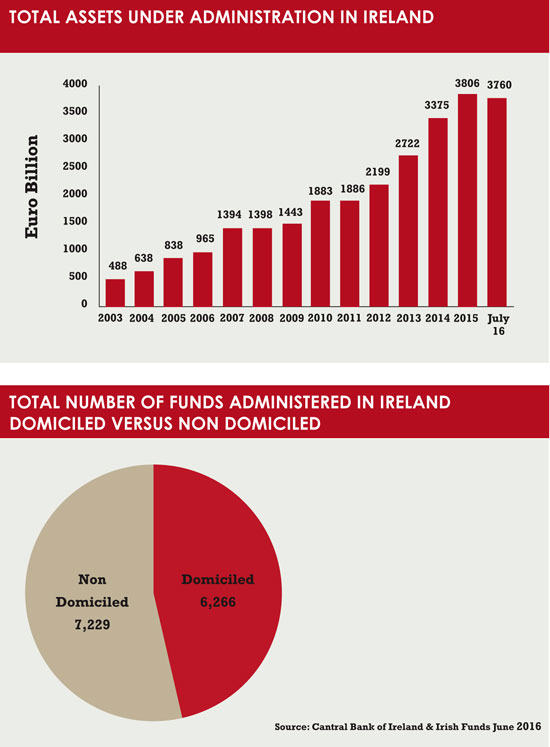 Ireland has carefully cultivated a  reputation as a vibrant, global funds centre - making a lot of its dominant servicing status for money market funds, exchange traded funds (RTFs) and alternatives. The featured tables and graphs, supplied by Irish Funds and based on figures from the Central Bank of Ireland (CBI) for the period up to the end of July 2016, demonstrate the numbers behind these claims. Both the number and size of irish domiciled AIFs and Ucits funds have continued to grow year on year for more than a decade, save for a momentary dip in 2007. 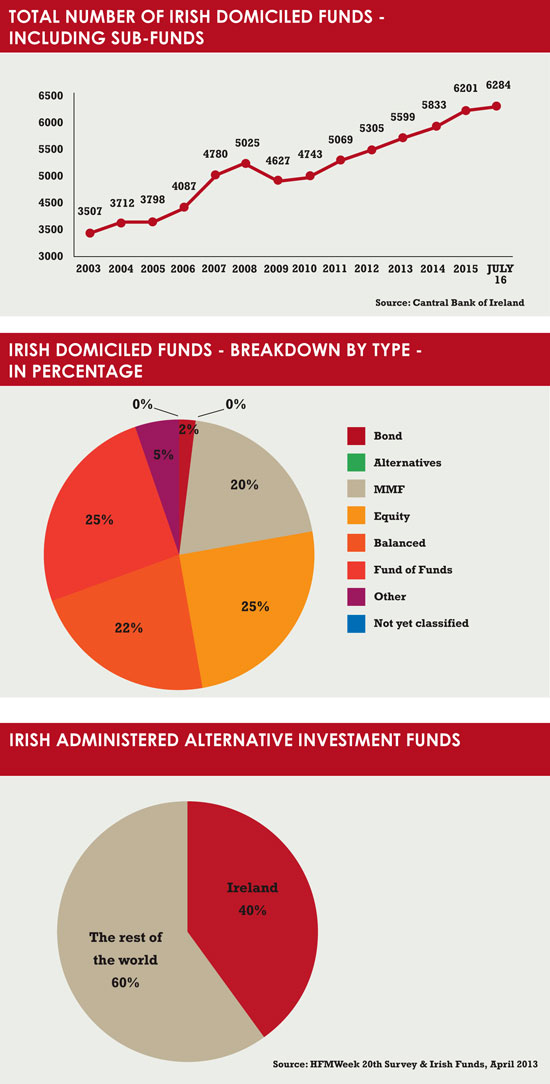 The breakdown of fund types shows that Ucits still outweigh AIFs by a factor of three to one and that there is a fairly even slpit between four fund types - money market funds, equity funds, bond funds and alternatives.Ireland also remains the home for European ETFs with a greater number of ETF assets (€245 billion) than the rest of Europe (€205 billion).

Ireland also continues to be a major centre for money marekt funds if the total assets for these funds has decreased slightly in the last 12 months- from €467 billion to €441 billion.

Total assets for Irish Qualified Investor Alternative Investment Funds (QIAIFs) have continued to rise over the last 14 years, from just €18 billion in 2002 to €391 billion , as of July 2016. In addition, the number of QIAIFs has also risen over the same period, although this growth has been much more modest of late, increasing by just one in 2016 (1,961 to 1,962).

It may be that next year’s figures for Irish QIAIFs are more modest, given the early success of Ireland’s newest fund structure - the Irish Collective Assets Management Vehicle (ICAV). The popularity of the ICAV will no doubt influence the next set of annual figures released by the CBI, the only question is by how much.

All eyes will also be on next year’s statistics to see if there are any notable additions to the number of Irish domiciled funds as a result of Britain’s protracted wihdrawalfrom the European Union.

Ireland may see itself as the best candidate to avail of any Brexit benefits but it will face competiton from other European domiciles such as Luxembourg, which has a similar status as a cross-border funds domicile, albeit with a greater propensity for Ucits funds over alternatives. and without the same cultural and linguistic links that Ireland has with the UK.