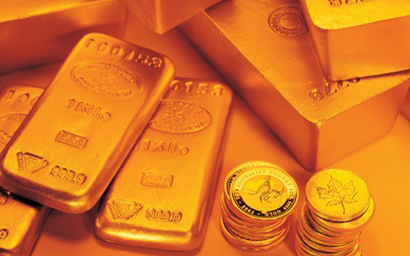 Pension schemes and sovereign wealth funds could push up the gold price as they increase allocations to the precious metal, according to HSBC's global head of asset allocation, Fredrik Nerbrand.

He explained that HSBC has a large gold position as a hedge against both sovereign defaults and inflation. This position will be particularly valuable if, as he predicts, institutional investors increase their gold weightings in future.

Nerbrand also explained that HSBC analysis suggests relative valuations favour credit over equities. He recommends spending risk budgets on high-yield bonds and other forms of corporate debt, though he says there may be value in emerging market equities.

Nerbrand, who spoke at a conference organised by ETF Securities, also predicted that the debt burden carried by the developed world will persist for many years. For the UK to reduce its debt to 60% of GDP in ten years' time, and fulfil the euro convergence criteria, the economy must grow at nearly 10% a year, nearly five percentage points above estimates.