It seems that many countries outside the eurozone had a materially better festive season than those in it by managing to stay out of the red.
Nick Fitzpatrick considers seasonal shopping data and the effects of underlying consumer trends, such as emerging markets and technology.

The Estonians, the Latvians, certainly the Lithuanians, but also the Romanians and the British appeared to have celebrated Christmas with more joy than the rest of Europe. Or at least they gave it a good go, if retail figures are any measure.

Amid warnings at the end of last year of a global slowdown in 2012, these countries splashed out far more on goods in December 2011 compared with the previous December, and with the minor exception of Romania, they even showed strong month-on-month increases in retail trade in the six months leading up to Christmas.

Even Germany, Europe’s most successful stock market of late, could not reach anywhere near this level of material mirth, seeing a 0.9% dip in retail sales December-on-December, according to estimates from Eurostat, the EU’s statistical office (see Figure A).

Christmas sales usually offer retailers the opportunity to get themselves back into the black, but many eurozone countries saw a red Christmas. Preliminary figures suggest that retail sales were down in 2011 compared with the previous year in countries within the single currency (with Estonia a notable exception), but were up (just) in the broader European Union: -1.6% for the euro area versus 0.1% for the whole of the EU.

The figures, published this month, came after a series of often, though not always, downbeat results from North America and European retailers in January. When US jeweller Tiffany & Co announced weaker-than-expected holiday sales in January, its stock fell 11%. But the UK’s John Lewis, with a flagship store on London’s Oxford Street, put in a robust performance.

Changing times
Swatch, the Swiss watch maker, was stronger than expected for the full year, says Scilla Huang Sun, portfolio manager of the JB Luxury Brands Fund at Swiss & Global Asset Management. This is a stock she invests in.

Christmas is a time of luxury, and the luxury sector reflects a sea change in global consumerism that is itself a result of the shift in global economics. It is the rise of the emerging market middle class, particularly in Asia, and retailers with access to this market may certainly benefit way beyond one mere Christmas time. “Brands in Europe do not have customers in Europe,” says Huang Sun.

Despite the pull of Asia, however, the luxury sector has itself slowed down.

“I expect Asia to be a strong environment; even if there is a slowdown, it’s from a high level,” she adds. “This is not a disaster for the luxury brands sector, but there is a slowdown. However, globally I expect secular growth in emerging markets.”

In the mass market over Christmas, discounting was used heavily in Europe and the US, meaning even positive sales were gained at the expense of slimmer profit margins.

Jack Neele, senior portfofilo manager at Dutch fund house Robeco, says: “It seems the consumer is relatively pinched or short of cash and looking for discounts.”

Online
In that case the consumer is just like the country he or she lives in. Shopping data is often used as a barometer for the economic mood and it is no surprise if December 2011’s data was broadly negative. 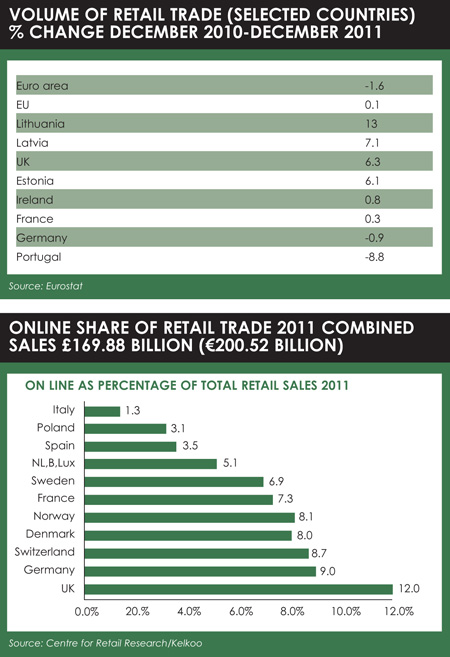 But retail data needs to consider online sales as well as those from stores for a fuller picture. Robeco is a thematic investor and sees the online consumer as an investment trend.

“Online companies have done relatively well and there is still a shift in that direction,” says Neele, a convert to Amazon e-books. He cites companies such as Amazon, Yoox (an Italian online luxury goods firm) and Mercado Libre (an internet mega-store in Latin America), as promising examples.

The growth may be reflected by PayPal, the online payment facility, which saw a 516% increase in mobile payment volume last year in the US on Black Friday – the day after Thanksgiving (November 25), which normally kicks off the Christmas shopping season with discounts. Actual figures were not given to put this into context and bloggers have criticised the firm, which is a subsidiary of eBay. Though in January, PayPal said it expected to see $7 billion (€5.34 billion) in mobile payment volume this year.

“Online is growing rather quickly,” says Neele. “We have definitely seen over the last shopping season that there has been a shift more and more to mobile shopping,” he says.

Online may prove to be as much of a shift in consumer trends as the rising middle class in the emerging markets.

If there is a third trend, we may hope that this “couch commerce” leads to less crowds on the high street at Christmas.