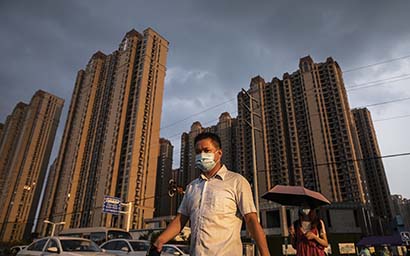 Ewan Markson-Brown was a fund manager at Newton Investment Management in London when he met executives from China’s Evergrande seeking to raise money for the company’s IPO in 2009.

Markson-Brown remembers that Evergrande – the troubled Chinese property giant – didn’t like the terms of Newton’s proposed investment, and he was surprised that such a highly leveraged company was able to turn down the funding. The secret was that political connections allowed the real estate developer to defy financial gravity, he says.

The IPO succeeded and not until September 2021 did the shares slump below their IPO price. The failure of the company, which has defaulted on its debt, is “great news” for China’s long-term financial liberalisation prospects, says Markson-Brown, now lead manager of the CRUX Asia ex-Japan Fund in London. The company captured “vast amounts of assets” which could have been better deployed elsewhere, he says. “Everyone knew at some point it would go under – but not when.”

Markson-Brown says the whole Chinese property sector has balance-sheet problems. However, though some regional property markets may struggle, Beijing and Shanghai are unlikely to suffer, and a property crash will be avoided by restricting new supply to hold prices up, he says. The banks are strong enough to play their part, he adds, as their Evergrande haircut is likely to be spread over a decade.

CRUX is now “marginally overweight” on China, having started to increase its exposure in November 2021. Markson-Brown predicts the property market will touch the bottom in the first quarter of 2022 and sees “incremental improvements” in GDP in the first half. “We are looking for risk in China. It’s a very good time to buy into the market.”

Managing defaults
The risk of contagion is not easily dismissed. Oxford Economics estimates that real estate contributes 24% of GDP in China, versus 15% in the US. That’s because the construction sector has more backward linkages to industries such as steel. Oxford Economics predicts that the property downturn will continue in the first half, with residential real estate investment declining by 6% before recovering in the latter part of the year.

China is likely to see further defaults and an increase in bad debts, but these are likely to be “managed in a way that limits significant damage to the overall economy”, says Andrew Gillan, head of Asia ex-Japan equities at Janus Henderson investors in Singapore.

Cuts to the reserve-requirement ratio probably signal less focus on further property-specific measures, he says. Regulators have asked banks to relax mortgage lending criteria and keep funding property developers. In recent weeks, the capital markets have been open for better-quality Chinese property names, which Markson-Brown says is a positive sign. The government will likely allow more highly leveraged real estate developers to default and then move their assets to state-owned enterprises while protecting new home buyers, says John Lau, head of Asian equities at SEI Investments in Pennsylvania. Beijing still has many levers to work with, including easing or reversing the policies that brought down Evergrande and cutting interest rates, he adds.

Soros onslaught
The systemic risk from Evergrande is “very, very low”, says Jerry Wu, fund manager at Polar Capital in London. He sees the default as an “engineered implosion” which is the intended consequence of Chinese political tightening. Though GDP is likely to suffer in the short term, November and December saw a strong policy shift away from de-risking to supporting the country’s GDP growth target. “They are doing the right things so far.”

The episode may alter historically conservative Chinese attitudes to investing in property as opposed to equities, which could benefit foreign managers trying to sell funds in the country. In early 2020, China scrapped restrictions on US asset managers selling to local investors. In September 2021, BlackRock raised about $1 billion for its mutual fund in China. The fund invests in areas such as clean energy, the digital economy, healthcare and education. Other foreign firms such as Fidelity International, Neuberger Berman and VanEck are also at different stages of entering the market.

BlackRock’s move was criticised by George Soros as a “tragic mistake” that would “damage the national security interests of the US and other democracies” as well as losing clients’ money. Soros argued that the crackdown on some Chinese tech companies which began with the sudden pulling of Ant Group’s planned IPO in 2020 shows that President Xi Jinping does not understand free markets and will do whatever it takes to stay in power. There is, Soros added, an “enormous crisis” brewing in China’s real estate market.

BlackRock responded that the US and China have deep economic interconnections and that it can help China’s ageing population address its retirement needs. China has 264 million people over the age of 60, which nearly matches the whole population of Indonesia. But Soros was not a lone voice. The tech sector crackdown prompted the Marshall Wace hedge fund in the US to reduce exposure to the American depositary receipts (ADRs) of Chinese companies such as Tencent, iQiyi and Baidu. The fund suggested that Chinese ADRs in the US have now become “uninvestable”.

Dexter Tiff Roberts, a senior fellow at the Atlantic Council think tank, has argued that Beijing is intent on strengthening control over private companies and foreign investment and increasing the role of state-owned firms. The aim, Roberts writes, is a new model of growth for developing countries to compete with a Western free-market model that China’s leaders believe is broken.

Too large to disregard
There is little prospect of China turning its back on the free-market economy, says Rob Brewis, fund manager at Aubrey Capital Management in Edinburgh. The private sector accounts for about 85% of urban employment and so is much too large for the government to disregard, he says. Brewis expects the Chinese private sector to seek to extend its global lead in areas such as electric vehicles and solar panels.

US-China tensions will remain a constraint on investment, and there may be more “financial decoupling” which will make US markets less attractive for Chinese corporates and vice-versa, says Wu at Polar Capital. Foreign funds will find it difficult to compete with the local fund industry, Wu argues, pointing to scaled distribution and brand recognition of local managers. Hong Kong will be the main beneficiary, becoming the “default offshore Chinese financial centre.”

China’s long-term process of financial liberalisation remains on track, though further progress will be “glacial”, Wu says. The Shanghai-Hong Kong Stock Connect programme, which links Hong Kong with mainland capital markets, will continue to be a key conduit for equity investment. “That is not going to be disrupted by Evergrande.”

A short-term consequence of Evergrande’s default is that Chinese investors, who are “woefully underinvested” abroad, are likely to put more money into domestic and Hong Kong non-property equities, as well as regional property and equity markets, Markson-Brown says. Property in Australia, Singapore, Malaysia and Indonesia is likely to attract greater Chinese interest, he predicts. Significant capital will also leave China to enter global equity markets. “That’s a certainty.”

Generational change
While the Evergrande default won’t be a one-off event, China can “probably manage this problem”, Brewis says. There are smaller real estate players who are in a similar position, he says. “These guys have been running unsustainable business models for some time.” Brewis expects that problems at the Shimao Group developer, which UBS estimates has $4.4 billion (€3.9 billion) bond payments due next year, will drag on for months.

Still, Brewis expects that the economy will be able to shrug off real estate turmoil. Unemployment is not a major issue and exports are booming, he says. Foreign investment increased in 2021, albeit at a slower pace than 2020. The level of unsold Chinese properties is much lower than five years ago and the average Chinese buyer is, on balance, a buyer of property on weakness, he adds. Brewis points to a process of generational change, with ever fewer Chinese having lived through the Cultural Revolution, as leading to new attitudes in personal finance. Many younger people will inherit property from their parents, and the decline in China’s historically high savings rate, which has been interrupted by Covid-19, is likely to resume once the pandemic eases, he says.

Greater interest in mutual funds is one likely outcome, says Brewis, whose fund has a stake in Chinese internet financial information provider East Money. Chinese personal savings, he argues, tend to be concentrated in property and cash, with little exposure to mutual funds. “The mindset will change over time, and Evergrande will be a catalyst.” All foreign fund managers in China are likely to benefit, he says.