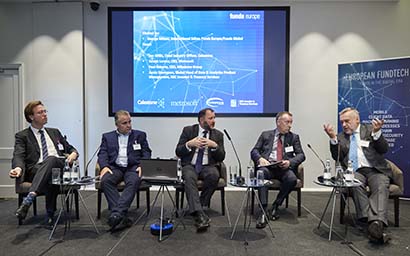 The third FundTech Lab event took place in London, where speakers and guests debated the rate and state of the funds industry’s digital transformation.

In late September, the vanguard of Europe’s fundtech community gathered in London’s Arundel House for the third FundTech lab event of 2018.

The day’s keynote interview was with ex-Schroders COO Markus Ruetimann. Since stepping down after 12 years, he has gone on to found boutique advisory firm Hardy London and become chairman of fintech firm Aprexo. He is also a member of COOCompass, which he describes as “a place to go where we can discreetly show our weaknesses”.

In Ruetimann’s view, the industry has a number of critical challenges to solve – managing the transition to a digital age, the willingness to change and the realisation that asset managers cannot do it all on their own. It also has to use new technology more effectively and remember that data is valuable only when it is used to make a decision and when you know which question you want answered.

But his biggest concern is an apparent shrinking of the talent pool in asset management. “There are fewer people that know the whole process and the new generation of people do not seem as talented or enthused by fund management,” he says.

“We need to be more diversified in our recruitment and look to other markets, from engineering to elite sport or retail, where people are more analytical and self-critical.”

The first speakers to flex their fintech credentials at the event were Keith Phillips, director for membership and enterprise at the UK’s trade body, the Investment Association (IA), and Graham Kellen, chief digital officer at Schroders.

Both are managing their respective employers’ fintech programmes (the IA’s Velocity and Schroders’ Cobalt) and were able to talk about what asset managers can learn from their chosen fintechs and vice versa.

A panel on artificial intelligence (AI) examined the use of this technology at every stage – from the software itself and its selection to its use within a fund and that fund’s consequent selection. Giacomo Barigazzi, co-founder, chief commercial officer and chief information officer at Italy-based deep learning software firm Axyon.AI, and Jonathan Hammond, a consultant with systems selector Investit, represented the technology side of the market.

The use of AI may still be classed as nascent, but some fundamental questions may need to be addressed before the industry can embrace AI wholeheartedly. For example, does the AI need to be transparent and explicable to both investors and regulators? Will human supervision always be needed? Does the AI provide something of genuine value that can’t be replaced by some lines of code? Can it be explained to investors? And perhaps the most important question of all, will it be good for the industry?

According to Beckett, one of the main reasons we have yet to see an AI fund picked by an AI fund selector and managed by a robo-adviser, thereby putting the majority of the audience out of a job, is that the industry is still too complex, inefficient and highly regulated to cater for such an autonomous model.

A final panel on blue-sky thinking, featuring selected service providers – Calastone, Metrosoft, Milestone Group and RBC Investor & Treasury Services - took a forward-looking view of the use of blockchain, robotics and the cloud.

According to Calastone’s chief industry officer Jon Willis, attitudes to blockchain can be divided into three categories – those that believe it will fundamentally change things, those that don’t, and those that have less than five years left in the market and are looking to get out before the fundamental change occurs.

Asset managers need to be more philosophically aligned with other industries in terms of new technology and data, said Milestone CEO Paul Roberts. A more manufacturing-led view of the distribution process, for instance, would result in a very different design from the model that prevails today.

Asset managers also need to look more closely at the data they actually hold, said Janusz Lorenc, Metrosoft CEO, and make more effort to reclaim the data they have given to third-party administrators and other service providers so that they can learn more about their customers.

And for the asset servicers, said Jamie Stevenson, global head of data and analytics product management, RBC Investor & Treasury Services, the focus remains the achievement of the operational nirvana – where data and technology is used to improve performance and product design and to process everything at a lower cost.