The largest software vendors in the industry embarked on a wave of consolidation this summer. Nicholas Pratt examines the implications for fund managers.

The investment management industry is no stranger to consolidation, be it managers or asset servicers. Now it is the turn of the software providers. This year there have been a string of similar deals, with back-office providers buying up front-office systems in order to develop a more comprehensive service offering spanning from front to back (see boxes, pages 17 and 18).

“This is a reaction to the march of BlackRock and its Aladdin system which covers front-to-back,” says Jonathan Hammond, partner at Catalyst Group. “We have seen the acquisitions of smaller firms by the bigger players for 18 months to two years now, and it shows no signs of abating.” 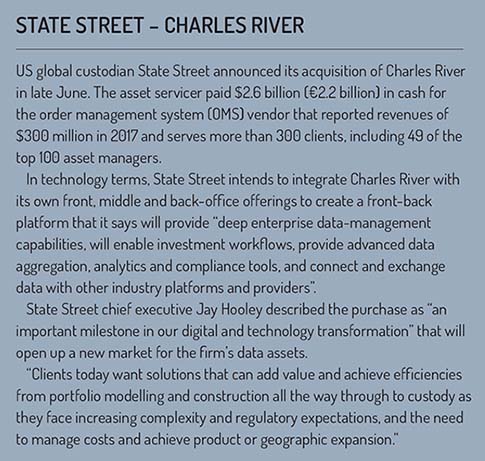 There are some differences in the recent M&As, says Hammond. For example, SS&C has long pursued an acquisitive strategy, but now we are seeing others that are not natural acquirers. And while none of the deals stick out as poor choices in terms of strategy, the issue will be the point of integration – the people, the technology and the platform.

One of the more interesting deals is State Street’s acquisition of Charles River, says Hammond. Many asset managers that employ Charles River will doubtless use other asset servicers, so what will happen to those arrangements? “This is new ground and not something we have seen before, so it will be interesting to see how it plays out. Can State Street adjust to becoming a software provider? And will other asset servicers look to do the same and make similar acquisitions?”

Should asset managers be encouraged or concerned by the acquisition trend? Hammond sees reasons for both. A period of integration is natural, but will they have the budget to keep upgrading the software and keeping it up to date with competitors? What will be the strategic direction for the acquirers and will there be long-term support for the systems they’ve acquired? The user groups made up of asset manager clients will be very useful in this regard, says Hammond.

The consolidation trend has also shown that portfolio management software systems need to evolve, he adds. “There has been a long period of underinvestment in these systems due to the regulatory focus in the market. In the meantime, asset managers are become more diverse and multi-asset in their investment strategies. Managers will be looking for the PMS vendors to spend more money on developing a multi-asset capability and systems that can cover everything from equities to infrastructure.”

Viable strategy
Greg Faragher-Thomas, director at consultant Alpha FMC, agrees that the consolidation trend is a result of managers demanding enterprise-wide solutions that span front, middle and back office as well as the need to reduce the amount of data reconciliations and data management that comes from using multiple systems. 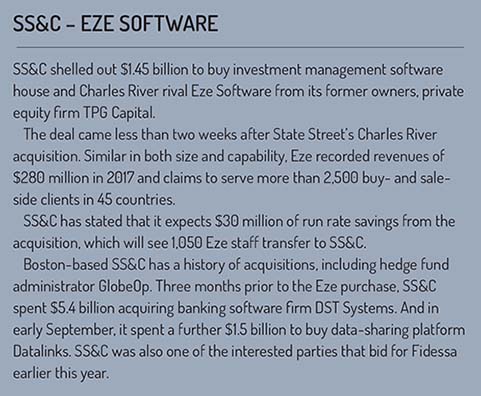 The strategy of creating front-to-back systems via acquisition is a viable one, says Farragher-Thomas, particularly in the eyes of those managers that are looking for real-time data from their front-office systems and an associated investment book of record (Ibor) that matches with their back-office systems.

He also welcomes the emergence of new options for front-to-back office systems where the middle/back office can also be outsourced, for example with an asset servicer accessing asset manager platforms.

However, while managers should welcome the prospect of more integrated solutions across their operating models, there is a chance that consolidation may reduce choice. “Customers may find they are driven to use a specific tool-set from one provider, rather than choosing best of breed across vendors,” he says.

Some front-office system providers that have not been acquired or become part of an amalgamated front-to-back product suite argue in favour of the best-of-breed approach. “There are advantages for a client to have a single front-office system such as operational efficiencies and streamlining of resources. However, it will always be a challenge to continue to develop at the speed of the markets,” says Melissa Ellis, director, European product at ITG, the trading technology provider.

“Our clients are interested in things such as tighter integration between best-of-breed systems, automating their low touch flow and consolidation of asset classes within a single EMS. Selecting best-of-breed systems can decrease cost, provide faster innovation and shorter cycles for deployment.”

The full gamut
And there are software firms, such as Aladdin and SimCorp, that have designed their systems to operate front to back from the outset and are keen to state the benefits. “Acquiring a set of best-of-breed solutions and bringing them under one roof may mean that a vendor can now call their offering front-to-back, but if it’s not developed as one system from conception, it’s hard to see the exact benefits,” states SimCorp chief executive Klaus Holse, in an article posted on the SimCorp website shortly after the State Street/Charles River deal. 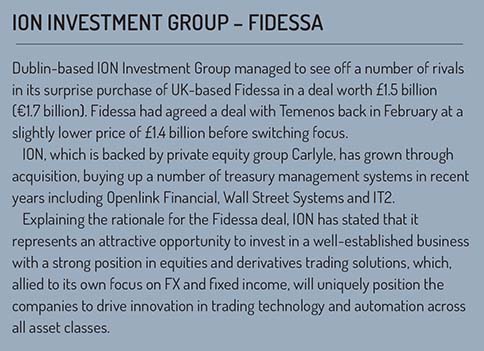 It is Holse’s “unwavering belief” that “one system, one data source and one truth across the whole organisation is the best approach to buy-side operations”. Meanwhile, consultants such as Catalyst Group’s Hammond argue that it is possible to achieve the same effect via acquisition and “only time will tell if the likes of SimCorp have a head start over the vendors going through mergers and acquisitions”.