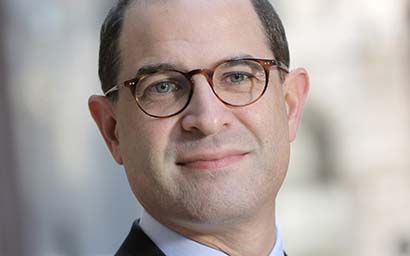 The chief executive of Calastone talks to George Mitton about blockchain, vapourware and why an acquisition might not be far away.

Funds Europe sits down with Julien Hammerson, chief executive of Calastone, the day news breaks of a $5.4 billion (€4.3 billion) deal by US-based SS&C to acquire DST Systems, a financial software provider that offers, among other things, mutual fund processing.

For those in the financial technology sector, the announcement is startling. Technology providers that had formerly been seen as rather dull, because they deal with back-office matters such as automation and fund accounting, are justifying giant valuations.

The deal raises several questions: is the current vogue for fintech a sustainable trend; will these deep-pocketed acquirer companies get value for money; and could the DST Systems transaction encourage buyouts of smaller companies, such as Calastone, that operate in similar sectors?

Superseding fax
In contrast to DST Systems, which was founded in the 1960s, Calastone is a relative newcomer – a start-up established in 2007 to apply technology to make fund order processing more efficient.

A technological solution was necessary because, at the time (and in some organisations, to this day), fund orders were generally done manually – a matter of employees sending and receiving faxes. This tedious process was error-prone.

Calastone employees tell anecdotes of fund companies that overlooked transactions worth billions because someone unplugged the fax machine or the paper ran out.

Calastone’s transaction network now serves 34 countries and territories, processing more than seven million messages and £80 billion (€90 billion) of transactions a month. With 149 employees, Calastone is a much smaller concern than DST

Systems, which has more than 13,000. But Calastone is growing. Hammerson is negotiating to rent an extra half a floor in its City of London headquarters to allow the business to expand. The company maintains offices in Luxembourg, Hong Kong, Taiwan, Singapore and Sydney.

Intelligence
Calastone is expanding into new services. In addition to its core business of handling fund orders, for which it charges a fee per transaction, it offers subscription services such as a ‘big data’-style product, currently in beta testing, that aims to show fund managers where their flows come from.

Hammerson says the tool will help managers meet know-your-client and anti-money laundering requirements. Sales teams will benchmark themselves against their peers. A company will know, for instance, that out of $100 million of inflows into Japanese equity funds on the Calastone network, its fund gathered $10 million.

“You could then take that data and share it with your data scientists,” says Hammerson. “And they could say, ‘When it rains on a Wednesday, we’re taking double the amount in those funds.’ You’ll be able to ascertain that kind of information.”

Calastone has also embraced that most voguish of fintech developments, blockchain. Starting in 2019, the core of its network will run on a blockchain system, which, Hammerson promises, will lead to efficiencies and lower costs.

Trendy
It is a sign of the times that these initiatives – involving data, networks and distributed ledgers – are not seen as arcane or boringly technical matters but are at the forefront of financial services.

Naturally, the excitement around blockchain has been stoked by the phenomenal rise of cryptocurrencies such as bitcoin. (During a discussion about crypto, Hammerson mentions that he owns a single bitcoin but, he says, he fears he has lost the password.)

Yet it is not only the fad for decentralised currencies that has prompted bankers to focus on the back office. Hammerson, a former equity trader, believes the mutual funds sector is attracting attention as part of a general infiltration of technology into finance.

“The equities world was transformed with the FIX protocol,” he says, recalling the electronic messaging system established in 1992 that replaced verbal orders between broker dealers and clients. “One of the things we’re doing is taking what we learned with the automation of equity trading and bringing some of those concepts to the mutual funds world.”

Frothy market
That is not to say that every fintech start-up that raises venture capital funding today will succeed in the long term. Hammerson, who remembers the thrill and turmoil of the dotcom bubble in the late 1990s, is actually rather sceptical about the term fintech, which he views as “a retail-focused expression”.

“There’s a lot of vapourware out there,” he remarks, using a term coined in the early 1980s to describe software that is announced long before it is delivered. Technology firms at that time were in the habit of briefing the market in advance about their forthcoming products in the hope of deterring potential customers from buying their rivals’ systems. Naturally, some of these long-heralded products never made it to the shelves.

There are certainly signs of frothiness in the fintech sector. One example is a UK-based company, On-line, which added the word ‘blockchain’ to its name and witnessed the biggest one-day share price gain since it listed in 1996. The price of On-line Blockchain increased almost five times over on October 27, 2017.

If history is a guide, then not everyone who invests in the increasingly trendy fintech space will get value for money. Yet large deals such as the DST Systems acquisition can only be good for a company such as Calastone.

“The DST Systems transaction will raise the profile of the mutual funds processing world,” he says. “People will be looking for stuff round the fringes.”

Does that mean, then, that the end game for Calastone is to be acquired?

“I think it’s inevitable that something like that would happen,” he says. “We get approaches quite frequently. That said, my main aim is to build this business, continue innovation, keep clients happy and forge forward as opposed to looking over my shoulder. In the end, it’s up to the shareholders. It’s always a possibility.”