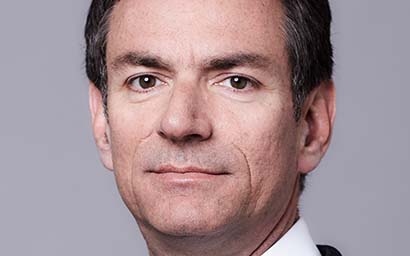 A particular market statistic interests Erich Gerth, the chief executive of BlueBay Asset Management. It is that Facebook’s value was recently $500 billion (give or take) – about the same value as assets under management in the ‘liquid alternatives’ sector of the European funds industry.

For Gerth, the coincidence reflects a watershed moment by symbolising how the convergence between alternative and mainstream investing has matured.

But the number also offers London-based BlueBay a reassuring signpost on its own journey, because the firm sees itself as sitting smack in the middle of that convergence zone.

BlueBay, which has $59.6 billion (€48.3 billion) of assets under management and 380 people, is seen by many as a specialist bond manager, but more fully, it would say it is like a hedge fund, albeit one that is highly adapted to the European regulatory landscape.

Evidence the CEO offers for this is that BlueBay pioneered the use of credit default swaps in Ucits funds in 2003 with a focus on capital preservation in long-only and long-short strategies.

The firm’s Global Sovereign Opportunities Fund is more evidence, he suggests. It is Ucits-authorised but unconstrained by benchmark, and investing in sovereigns, interest rates and currencies makes it “more akin to a macro hedge fund”.

The Luxembourg-domiciled fund has around $790 million of assets under management. Gerth considers this a success, driven by investors who wanted an investment management capability somewhere between that of a traditional house and an alternative investor. “People who cover us on the sell-side,” he says, meaning various actors influential in the fund distribution process, “include those who cover hedge fund groups.”

New ways of investing
But what can Gerth do that has not already been done by his predecessors? His tenure as CEO has not been long – less than a year, in fact.

Appointed in May 2017, he had been with BlueBay since December 2012, initially as global head of business development. He also sat on the firm’s management committee and, since 2014, on its board.

Co-founder Hugh Willis was in charge at the time of BlueBay’s most pivotal moments: the sale to Royal Bank of Canada (RBC) in 2010 for £963 million, and its stock market listing in 2006.

Then Alex Khein, formerly chief operations officer, was appointed CEO in 2014. He departed last year after a changeover period with Gerth, who seems to be in charge of an already-built firm – founded, listed, sold – with few if any mountains left to climb.

But the circumstances of central bank policy mean there is more to Gerth’s role than being a custodian of someone’s legacy. With gradually rising interest rates, a new chapter is clearly opening for the bond specialist with a hedge fund edge. “Now that interest rates are changing and volatility is likely to increase – and given that the 30-year bull market may be over now – it’s time for investors to look at different ways of investing in fixed income,” he says.

Gerth points to contingent convertible bonds, known as CoCos, and to local currency corporate bonds in emerging markets, which he says will probably be one of the fastest-growing areas over the next five years.

Diana Mackay, an asset management branding expert, agrees that the firm’s hedge strategies could “differentiate it from the herd”.

The chief executive of MackayWilliams, a European funds research provider, adds: “With many pundits currently calling the end of the bond bull market, BlueBay and other bond specialists may find asset gathering more challenging.

“However, I think this is where its hedge strategies might play well, particularly for more sophisticated audiences. Distributors are keen to find strategies that are uncorrelated with market movements.”

Another major task is to take BlueBay into the era of environmental, social and governance (ESG) investing – an area less developed in fixed income than equities, but increasingly in demand. Gerth says the firm is recruiting for its ESG business.

But if there is at least some element of custodianship in his role, it will be to maintain BlueBay’s independent spirit from within a global banking group.

The 5,218 km between Mayfair and Montreal, where RBC is based, may have helped so far, but Gerth indicates that RBC is letting BlueBay run unfettered in any case. BlueBay’s individuality was one of its selling points, he says.

The parent company has a strategy of creating a global asset management business. “RBC likes us because we are not just another me-too manager.”

When he joined BlueBay, Gerth saw a “unique situation where a firm had a large balance sheet but complete investment autonomy”; this essential state has been maintained post-acquisition, he suggests.

“No-one would say we have been integrated,” he adds, pointing out that this has meant business continuity for BlueBay. “RBC owns us but working with them has been accretive to our business. We are a European-based fixed income specialist and our core market will always be Europe, though RBC gives us the opportunity to open new markets in North America, specifically Canada.”

Since the deal, revenues from RBC stand at 10% of BlueBay’s total. Before the deal, they were zero.

Gerth does have prior experience of working within a captive manager. He came to BlueBay from the insurance company-affiliated Aviva Investors, where he was chief executive of Asia-Pacific and global business development. Prior to that, he was CEO of Janus Capital International, having started there in 2003.

These earlier roles make Gerth well travelled. He is also well read, and his advice for aspiring CEOs is “Read a lot.”

Page-turners
One of his recommendations is Sapiens: A brief history of humankind by the Israeli historian Yuval Noah Harari.

Less surprising is the behavioural economics book Misbehaving by the 2017 winner of the Nobel Prize in economics, Richard Thaler.

For real business, he suggests Geoffrey A Moore’s Crossing the Chasm. “One of the most interesting books I have read,” he says.

“It’s about how tech start-ups can get incremental growth. It has a lot of applications for our business.”

And for a read suited to the era of emerging markets, there’s Henry Kissinger’s World Order.

“It puts things into an historical context, showing that how we look at the world is different to how people in other parts of the world do.

“You cannot only have a European view.”