European CIO of the Year

The winner of the CIO of the Year award, Colin Purdie, began his career on the regulatory side, joining the UK’s Financial Services Authority back in 2002.

In 2005 he worked as a fixed income broker at Charles Stanley before entering the funds industry in 2006 as an investment manager for Aegon Asset Management. 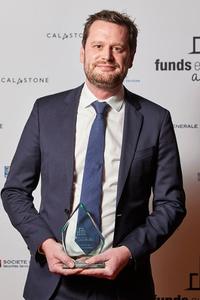 Purdie then joined Aviva Investors in 2010, initially as a credit fund manager and then as CIO for the credit team. He was subsequently promoted to his current role as CIO for Liquid Markets in 2021.

In addition to his responsibilities leading the equity, multi-asset and macro, credit and ESG teams as well as a dedicated trading division, Purdie is also a member of Aviva Investors’ executive team.

Good leaders will always acknowledge the teams they work with. To that extent, then, this award represents a second win for the firm. One panellist for the CIO award remarked that this is a firm “we are continuously impressed by and which holds great respect in the industry”.

Of particular note is Aviva Investors’ progress on ESG issues. In his prior role as CIO for the firm’s credit team, Purdie spoke about the critical role of the debt and credit markets as a potentially powerful but largely untapped force that could exert its influence on the behaviour of corporates through the billions of dollars they provide in debt financing.

The focus on ESG, stewardship and engagement has continued in his role as CIO for the Liquid Markets unit.

In his acceptance speech, Purdie said: “The judges specially commended Aviva Investors for the ESG integration measures we have taken over the years, which I believe are particularly worth celebrating.”

He also thanked his team. “Achievements that would have not been possible without the collaboration and lead of my fellow colleagues.”

Aviva Investors has been especially vocal this year on climate concerns and the need for the financial system to play its part. Earlier this month, the firm called for a “Bretton Woods-scale overhaul” to tackle climate change and for private capital to play a leading role in this change.

The firm also launched a climate-ready index to measure how G7 nations are progressing on climate mitigation, resilience and adaptation.

Purdie and his liquid markets team will doubtless play an integral role in continuing to promote the importance of climate finance, while also providing investment products that support causes such as net-zero and which also seek to provide robust financial returns for investors.