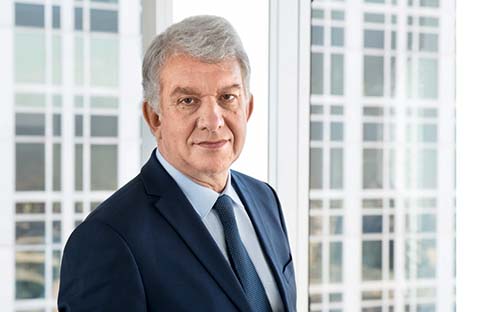 Yves Perrier, the CEO of Europe’s largest asset manager, sees climate change in his own back yard. He talks to Nick Fitzpatrick about ESG, diversity and his plans to compete with BlackRock’s tech platform.

The Arve Valley is an alpine area in south-eastern France. In 1954, the chief executive of Amundi, Yves Perrier, was born there.

The valley is in the Auvergne-Rhône-Alpes region, which includes the popular ski resort of Chamonix. So, if you ask Perrier whether he condones the term ‘climate emergency’, which protestors such as Extinction Rebellion want the media and corporate worlds to use, he harks back to the snow-capped landscape of his childhood.

“I come from a valley near Chamonix and it is clear that the glaciers have deteriorated from when I was young. There is no doubt that there is warming of the atmosphere and no discussion that there will be problems if we do not meet the 2˚ warming cap. But to be successful in this depends on finance and we must incentvise corporates to act,” he tells Funds Europe.

As CEO of Europe’s largest asset manager, with about €1.5 trillion of assets under management at the end of 2018 and a few hundred clients who are institutional investors, Perrier is in a position to do more than most people about climate finance.

Amundi plans to integrate environmental, social and governance (ESG) investment criteria into all funds at Amundi by 2021, including the firm’s exchange-traded funds (ETFs), which have to invest in corporates, good and bad. All investment staff will be trained in ESG, and companies the firm invests in will be weighted partly by their ESG rating, he says.

“We do not want to exclude companies, but we want to incentivise and stigmatise them,” he adds.

Amundi aims to raise money to finance the transition of energy away from fossil fuels. But, says Perrier, European policymakers must also do more to develop a “real energy policy”. This might consist of nuclear power, given that nuclear is the “energy with no CO2”, although “it does have other problems”.

Amundi’s assets supporting energy transition and growth in green energy had reached €8.2 billion as of December 31, 2018.

Perrier adds: “We spoke with the CEO of Total and a leading scientist at the IIGCC [the International Investors Group on Climate Change] and we agreed that Europe lacks a common, shared view on energy.”

He and Total’s CEO, Patrick Pouyanné, are directors of Paris Europlace, a think-tank and promotional body of the Paris financial centre.

Synergies
Paris-based Amundi became Europe’s largest asset manager following the 2017 acquisition of Pioneer Investments. It is one of the top ten largest in the world, with BlackRock at the top.

The two firms compete in both active and passive investment, with strong lines in ETFs.

One of the first tasks Perrier took after the acquisition of Pioneer was to lift Pioneer out of BlackRock’s risk management and portfolio management trading system, Aladdin, and migrate to Amundi’s own system, Alto. BlackRock sells Aladdin through BlackRock Solutions and generated $785 million (€708 million) in technology services revenue in 2018, the majority of this from Aladdin. Tech revenue at BlackRock grew 30% between the third quarter of 2018 and the same quarter in 2019.

Perrier says IT has always been a key factor of competition for Amundi and that this is the reason why “we have permanently invested to have full control of our software”.

“As an industry, we speak of dematerialisation, AI and things like this, but if you do not have real control of your IT, then you are not going to be able to manage the trend towards digitalisation efficiently.”

The Pioneer-Amundi merger generated €175 million of synergies, 30% of which came from IT.

Amundi has since started selling its Alto asset management system to third parties through its Amundi Services division. Alto is competing with Aladdin and SimCorp’s Dimension, another major risk and portfolio management system in the market.

“We are at the beginning of our action plan to provide Alto to asset owners and asset managers. I am very confident in our capacity of development in this field,” Perrier says.

The acquisition of Pioneer has been arguably the most successful of large asset management M&As in recent times. It was completed in 18 months. Funds were merged, as were legal entities, and the product line was rationalised.

The bad news for staff was that numbers were cut by 600.

Amundi announced the €3.6 billion acquisition in 2016, a year after it had floated on the Paris stock market. Indeed, Amundi’s flotation helped finance the deal.

Even before the Pioneer acquisition, Amundi had made the top ten league of largest asset managers and was the only European in a table of US players.

Asked how he has adjusted to answering to shareholders since the flotation, Perrier says that the flotation created “positive pressure”.

“I try to present in the short term and the pressure of the short term is a positive thing. However, most investors in Amundi are long-term and understand that quarterly reports have to be put in perspective,” he says.

Not complaining
It turns out he is one of the lowest-paid CEOs, relatively speaking. In 2018, he earned €3.005 million, including basic pay and bonus. In 2017, when he earned €2.58 million, a McLagan survey showed his pay was at the low end of the market, compared with a 24-strong peer-group median of €8.155 million.

He’s not complaining. “I’m happy with my remuneration,” he says. He won’t judge the remuneration polices of other CEOs, but thinks Amundi’s policy is “a good one”.

“I say there is no star in Amundi but Amundi itself,” he adds.

The asset manager has asked each company in which it holds shares to release the ratio of the CEO’s pay to that of its average employee, he says; Amundi’s is 22.

The topic, of course, links into Amundi’s ESG strategy and there is no doubt that Perrier – sitting in his office, with a grand view of the city that has become almost synonymous with climate action – is serious about the company’s role in this.

“If investors do not integrate the interests of society in their investments, then who will?” he asks. “Product differentiation is decreasing and brand differentiation is increasing. Brand is also now defined by taking into account all society’s interests.”

Passionate about diversity
The shrinking snow line of the region he grew up in is clearly a concern. But speaking about ESG commitments, Perrier talks passionately about another ESG topic: diversity. He demonstrates particular support for disabled people, noting at one point that they face even more barriers to finding work than women do.

“Each human being, for me, has the same value: women, men, disabled, strong, weak, intelligent and non-intelligent and, of course, black and white.”

He adds: “Our executive committee is 24% women, and France is one of the best countries for women who return to work after having children without creating a problem for their career.

“But for disabled people to not be able to have jobs, that is the opposite of all the principles of this company. The first value of Amundi is courage – and disabled people teach us a lesson in courage every single day.”