Twenty years ago, a middle-aged couple who planned to go on holiday might walk into the premises of their local travel agency, choose from a list of destinations and leave it to their agent to book the flights, hotel and transfers. Today, it is relatively rare for prospective holidaymakers to leave it all to an agent. The popularity of price comparison websites for airlines, and access to user-generated reviews of hotels, restaurants and resorts, have emboldened foreign travellers – both young and old – to do much of their research and bookings themselves.

The funds industry is undergoing a similar change. Whereas in the past, the channels for distributing funds were well established – the couple in our above example might have gone to see their financial adviser, or a representative at their bank – today, a far greater number of people are likely to do their fund research themselves. That has led to a rise in investment on fund platforms as investors take advantage of the opportunity, offered by the internet, for them to direct and manage their fund portfolios themselves.

Clearly, distribution is changing. This research project, which is planned to be the first in a series of reports in association with Clearstream, takes a high-level view of a key theme affecting the evolution of fund distribution, disintermediation. By threatening the conventional gatekeepers that historically separated fund investors from fund managers, disintermediation is opening up new possibilities, and new business risks, for the asset management industry.

This report will provide a basis for future surveys, with an in-depth report on exchange-traded funds (ETFs) scheduled as the next in the series. Our hope is that, by examining the sentiment of the funds industry on the factors affecting it, we can predict how the future of fund distribution will look. 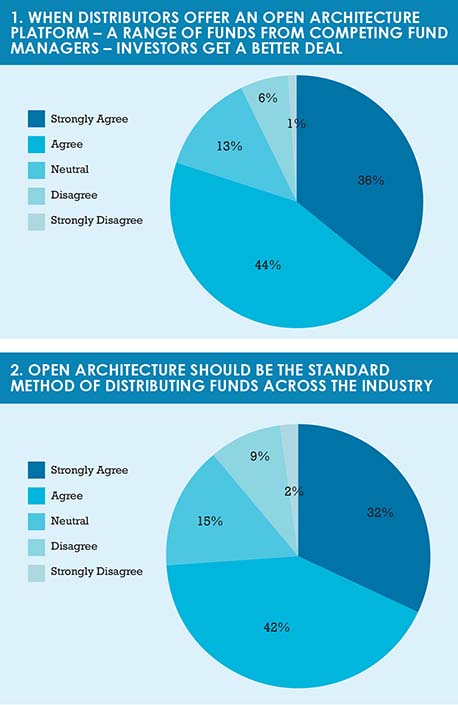 Open architecture
Open architecture is not a new concept for the funds industry, but its application is certainly in line with the trends of the digital age. Describing a system that offers access to funds from a wide range of providers, open architecture is prized by fund platforms, which boast about how many funds they can offer. (In this respect, fund platforms are similar to travel comparison engines, such as Skyscanner, which markets itself as having access to a very wide range of airline websites.)

Our survey revealed a strong belief among respondents that open architecture was in the interests of the end investor (see page 14 for survey methodology). Of the 192 respondents that answered this section of the survey, 80% agreed with the statement that, ‘When distributors offer an open architecture platform – a range of funds from competing fund managers – investors get a better deal’ (figure 1). Of this, 36% strongly agreed. Only 7% disagreed. As far as our respondents were concerned, open architecture is clearly a boon for fund buyers.

Given this belief that open architecture benefits investors, it should be no surprise that almost as large a majority agreed with the statement that, ‘Open architecture should be the standard method of distributing funds across the industry’. Nearly three-quarters of respondents, 74%, agreed with this view – of which 32% strongly agreed – while only 11% rejected it (figure 2). It is reassuring that our respondents wanted the industry to do what they believed was in the interests of its customers. 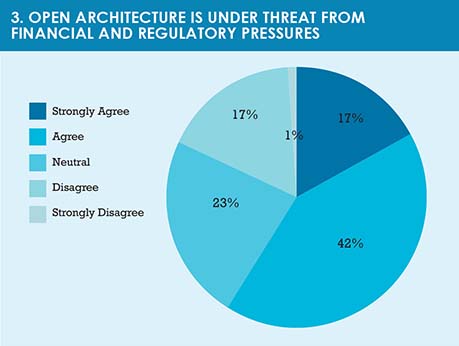 However, there has been some media coverage in the past few years that suggests fund distributors are facing financial or regulatory pressures that may discourage them from maintaining open architectures. Some banks have reportedly stopped selling third-party funds in order to push their own branded products, while some advisers have dramatically reduced the number of external managers they use in order to cut down on operational complexity or to reduce client servicing costs. Regulation such as Mifid II, by setting rules on payment of retrocessions to improve transparency, will have a big impact on the sector.

Our respondents recognised these concerns. A majority, 59%, agreed that ‘Open architecture is under threat from financial and regulatory pressures’ (figure 3), of which 17% strongly agreed. There were some doubters, however, with 18% disagreeing with the statement. Nearly a quarter, 23%, maintained a neutral stance, a figure that perhaps reflects the complexity of the issue.