Perhaps the most divisive issue examined in this survey concerns the role of technology in guiding investors to make the right choices. Robo-advisers, which use algorithms to propose investment suggestions based on user inputs, are being touted as a revolutionary development in the world of fund distribution that will allow millions of investors to get personalised investment advice at much lower costs than if they were to go to a human adviser. 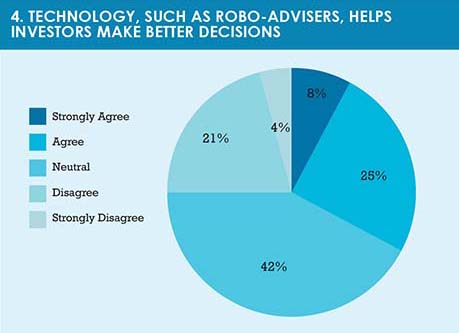 But robo-advisers are bitterly opposed by many traditional distributors, who argue there is no substitute for the human touch. 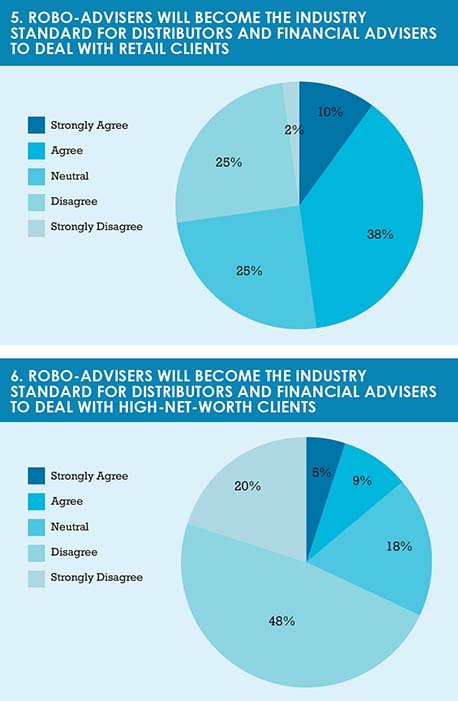 The 188 respondents who answered this section of the survey were divided almost equally between the 33% who agreed that ‘Technology, such as robo-advisers, helps investors make better decisions’ and the 25% who disagreed (figure 4). Interestingly, the most popular position on this question was to withhold judgement, with 42% of respondents staying neutral. The large number of people who have yet to form a judgement on this question suggests the case for robo-advisers has not yet been satisfactorily made.

Respondents were also split on the question of whether ‘Robo-advisers will become the industry standard for distributors and financial advisers to deal with retail clients (those with less than $1 million of investable assets)’. Although nearly half, 48%, agreed with the statement, a sizeable minority, 27%, disputed it, while a quarter stayed neutral (figure 5). 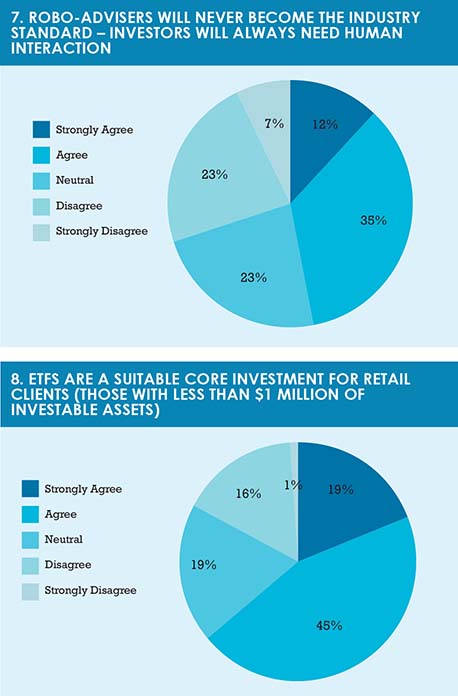 Retail investors with relatively low wealth are usually seen as the most appropriate users of robo-advisers, but, clearly, not everyone believes this is the best option for them.

There was less dispute when it came to richer clients. The statement, ‘Robo-advisers will become the industry standard for distributors and financial advisers to deal with high-net-worth clients (those with more than $1 million of investable assets)’ was opposed by more than two-thirds of respondents, 68% (and among that, 20% strongly opposed it). A mere 14% agreed with the statement, suggesting the industry is a long way from integrating robo-advisers into, for instance, private banks. The message is clear: when it comes to wealthy investors, human advisers are here to stay.

The ambivalence towards robo-advisers was reflected in the final question on this section of the survey. Respondents were asked to agree or disagree with ‘Robo-advisers will never become the industry standard – investors will always need human interaction’. Nearly half, 47%, agreed, while 30% disagreed and 23% stayed neutral (figure 7).

Passive funds
Another trend that is upending establishing models of fund distribution is the growth of passive investment, especially exchange-traded funds (ETFs). Low-cost and transparent, ETFs are gathering more and more assets. The benefits to institutional investors are clear – exposure to equity or bond indices at a fraction of the cost of actively managed funds.

But some have argued ETFs are not suitable for retail investors. 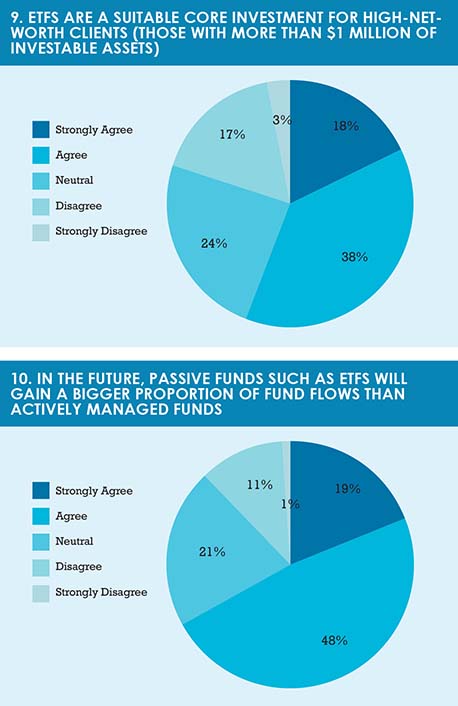 Our respondents generally felt ETFs are suitable for retail investors. A majority, 64%, of the 184 people who answered this section of the survey agreed that ‘ETFs are a suitable core investment for retail clients (those with less than $1 million of investable assets)’, of which 19% said they strongly agreed (figure 8). Only 17% disagreed.

Respondents were less sure when the same question was asked of richer clients. A slim majority, 56%, agreed that ‘ETFs are a suitable core investment for high-net-worth clients (those with more than $1 million of investable assets)’.

A fifth disagreed with this statement, while slightly more respondents than in the previous question were neutral (figure 9).

Will ETFs and other passive funds continue their healthy asset raising? Most respondents thought they would. Two-thirds, 67%, of respondents agreed that ‘In the future, passive funds such as ETFs will gain a bigger proportion of fund flows than actively managed funds’ (figure 10). Of this, 19% strongly agreed. Only 11% disagreed, with the remaining 21% staying neutral.