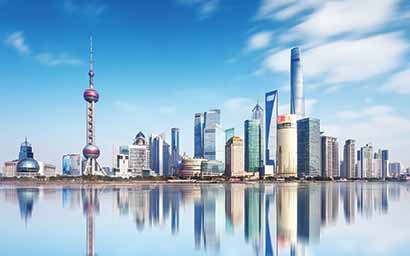 As the effects of the 2008 global financial crisis set in just over a decade ago, China’s central government conjured up an economic stimulus package totalling $586 billion – its largest ever at the time. Beijing was about to embark on an enormous infrastructure spending programme, accounting for about 38% of the financial bundle, to boost a faltering economy and stimulate consumer spending.

“High-speed trains now connect China, but this was not the case ten years ago,” says Dong Wang, chief executive of HSBC Jintrust Fund Management as we overlook Shanghai’s sprawling Pudong district from the firm’s offices. A financial hub, the area is the postcard image of a modern Chinese megacity, boasting a skyline of vast, vertigo-inducing skyscrapers, luxury malls, eateries and multi-lane roads lined with electric vehicles. The expectation is that this electric motor industry will increasingly drive economic growth.

Travelling from Shanghai to Beijing now takes four-and-a-half hours, compared to about ten in 2008. Similarly, it is one hour from Nanjing instead than two, Wang observes, highlighting good rail infrastructure as the starting point for connectivity.

“China is building three megacity clusters – the Jing-Jin-Ji region, the Yangzte River Delta and the Greater Bay Area – and that is major for the domestic-driven economy,” he says. “With a population of 350 million people, you want to build the densities so people do not have to live physically in Shanghai, for example, because it is already too crowded. No matter how good infrastructure is, it is very difficult to support so many people, but with the high-speed train, it is possible to live outside cities and commute in.”

“Infrastructure by nature is a long-term investment and normally offers a more flexible structure and a sustainable return,” says Betty Zhou, head of business development at Caceis in Hong Kong. “A long-term investment can also provide a certain degree of protection against inflation, which is why people have faith in it.”

Direct exposure to infrastructure can be achieved via private debt and private equity, though this is not easy for foreign investors. “But they can buy Chinese stocks which have exposures,” says Wang. “Stock connect, as a feasible method, is a collaboration between the Hong Kong, Shanghai and Shenzhen Stock Exchanges which allows international investors to trade securities in the Chinese market through the trading and clearing facilities of their home exchange.”

Building momentum
Between 2010 and 2015, China spent 8.3% of its GDP on infrastructure, according to Deloitte – some way ahead of its neighbour India, which spent 5.6%, and third-placed Saudi Arabia (5.1%). The statistics show that when it comes to investing in infrastructure, China does not follow a blueprint.

As of 2019, the State Council can assign a total of 1.39 trillion renminbi ($202 billion) in bonds to local governments. This would enable them to “promote the timely implementation of projects” and maintain “sustained and healthy economic development”, according to China’s financial and economic committee.

Indeed, 2019 infrastructure construction plans for Henan and Sichuan provinces reportedly top $443 billion, and railway projects totalling $125 billion (that’s 6,800 kilometres of new lines across several cities and provinces) have been given the green light.

In 2008, China administered a huge stimulus package as an antidote for a faltering economy. A decade later, Beijing finds itself at an economic crossroads once again, due to a combination of domestic policies and a trade war laced with global objections to its technological ambitions.

“In 2018, financial deleveraging was initiated by the Chinese government,” says Jun Li, chief investment officer of Sagard China. “In hindsight, this was not ideal, because coupled with the trade war with the US, the growth of the economy slowed down – and that was policy-driven. However, such aggressive policies were revised in multiple ways in the second half of 2018, so policy-makers are not one-dimensional. They look at the impact, they make changes and they adjust it accordingly, which is a typical Chinese approach.”

China’s economy grew at its slowest annual pace (6.6%) in 2018 and the country is turning to increased infrastructure spending and tax cuts to stimulate growth. But will infrastructure investment provide a shot in the arm for the economy this time around?

Alongside the economic slowdown in 2018, China saw record corporate bond defaults totalling $18 billion. This was more than three times the default rate in 2017, raising questions over a growth model powered by debt. To compound the nation’s woes, the first two months of this year has already seen $1.8 billion of local note defaults, including four private and 12 public offerings, according to figures from Bloomberg.

Wang acknowledges the issues, but points to a change in the overall regulation in terms of the feasibility of domestic infrastructure projects. “We learned from the last round of over-building. Hence the regulatory framework and anti-corruption campaign,” says the HSBC Jintrust chief executive. “The likelihood of having lots of non-performing projects without any cash flow has come down quite dramatically,” he adds.

“This time around, everyone needs to go through the process of the projects needing to be approved at a central level to look at the feasibility. Then there are requirements in terms of the fiscal revenue, expected cash flow from the project, the location and the local government’s overall balance sheet. After those considerations, the decision on how far it will be supported by special bonds [which help finance infrastructure projects] will be made,” he says.

While some question the returns on China’s infrastructure projects, the local view is that it enables visible growth. Indeed, Nasa’s Landsat satellite imagery shows Shanghai’s explosive expansion between 1984, when it was home to more than 12 million people, to a megalopolis of 24 million inhabitants in 2016. As the city expanded, farmland gave way to houses, factories, parking facilities and roads.

“Infrastructure is important because you never know what new models can be built along it and China has always favoured building good infrastructure to support future growth,” observes Wang.

So, what areas of future growth is China eyeing and how is it using infrastructure to underpin its global ambitions?

Incubating innovation
The next phase of economic growth is set to be fuelled by 5G, which is a great deal more than just superfast wireless connectivity. “5G makes possible the connection and interaction of billions of devices of almost any kind and collection of data from those devices,” a 2018 report by Deloitte notes, adding that 5G connectivity could lead to “new frontiers” of productivity and innovation.

“Telecom operators have not yet started a full deployment of 5G in China, but you will see that in 2019 and by 2020, it should be commercialised in certain areas,” says Li. The speed of transmission will be massively increased, bringing with it new forms of application and innovation, she notes.

With a population just shy of 1.4 billion people, China has about 802 million internet users. Of these, 788 million – or 92.25% – are mobile users, which is where tech giants are focusing their gaze. By rapidly digitising once-traditional sectors, these tech giants are latching on to opportunities to deliver services to a huge domestic market that the government simply cannot reach. From online healthcare to drug stores, investors are paying attention to this: look at Ping An Good Doctor, China’s largest online healthcare platform with 228 million registered users, which raised $1.1 billion in its Hong Kong initial public offering last year.

“We do see international investors setting up technology-only funds in China, because the mobile penetration rate and fast development of new economies in China is very attractive to foreign investors,” says Li. “For example, investors in Baidu, Alibaba and Tencent made a lot of money over the last ten to 15 years as these companies become global giants – that is the rationale.”

With its significant investment in wireless communications infrastructure, Beijing has laid down the foundation of productivity and innovation that future economic growth will depend on. But China also finds itself on a collision course for technological supremacy with the US as it creates what Deloitte terms a “5G tsunami”, making it near-impossible to catch up. For now, China appears to show no signs of slowing down when it comes to investing in infrastructure – a power source for future economic growth.