From a list of emerging technologies, the survey asked respondents to select which will have the largest impact on the funds industry (fig 5). The 2018 UK and EUR survey asked the same question, although the list of responses has been amended slightly this year. 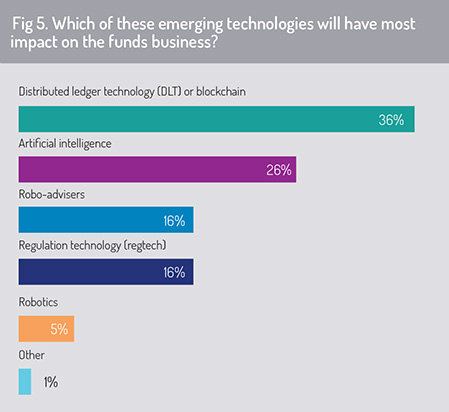 Respondents indicated that distributed ledger technology will have the greatest impact, just as they did in last year’s survey, although the percentage has declined year-on-year (from 43% to 36%). Artificial intelligence will assume rising importance for the asset management industry (highlighted by 26% of respondents, compared with 22% in 2018).

Large investments have been made in developing DLT solutions for the financial services industry during the past five or six years and this is now translating into live applications designed to bring additional security and efficiency to transaction processing, including trade order routing, settlement and record-keeping, as well as the development of entirely new business models. Distributed ledger-based technology, using secure, permissioned “blockchain”, enables stakeholders to a trade to access a real-time view of each transaction and to agree the terms of transaction settlement working from a single, accurate set of records.

On settlement, change of ownership is adjusted automatically on the register, delivering a common book of record across trade participants that is updated in real time. Because settlement parties have a common view of the settlement terms on blockchain, this dramatically simplifies reconciliation requirements across participants. By making this common record accessible to financial supervisors, this can also strengthen regulatory oversight and streamline the task of regulatory and compliance reporting. 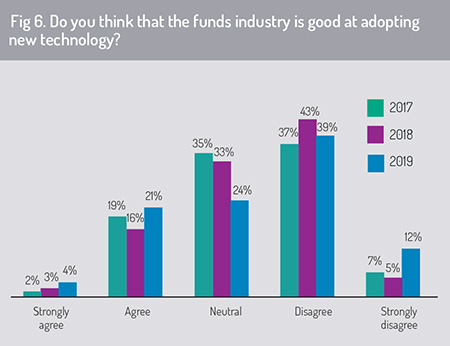 More broadly, 16% of respondents believe that regulatory technology applications will have a major impact on the funds business and a similar percentage indicated that a key role will be played by robo-advisory technology – a result that, in both cases, broadly aligns with last year’s survey. 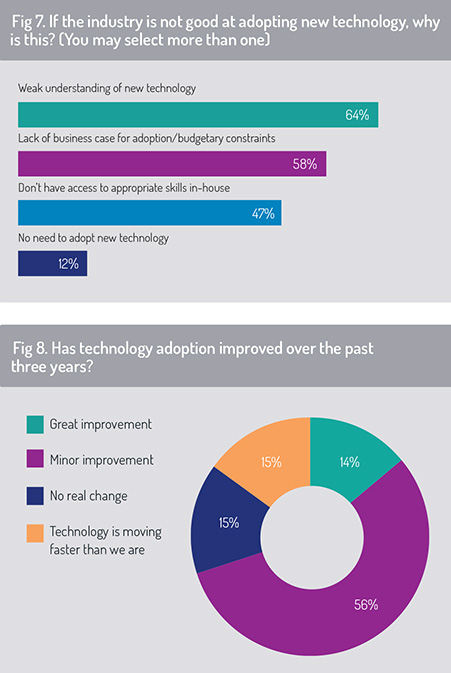 This contrasts with the results of our Asian survey, conducted in April and May 2019, where respondents were more optimistic about the ability of the asset management industry to implement new technology – just 26% of Asian respondents disagreed with the view that the asset management industry is good at implementing new technology (a significantly smaller figure than the 37% who agreed).

We asked those respondents in Europe and the UK who do not believe the industry is good at technology adoption to provide further information from a list of options. The dominant reasons identified were that the industry has a “weak understanding of new technology” and that new implementation is limited by budgetary constraints or the lack of a satisfactory business case for implementation. A sizeable group of respondents also said that they lack the in-house skills required to manage technology upgrade projects effectively (fig 7).

On a positive note, the survey found that more than half of respondents believe that the industry has improved slightly in its ability to manage technology adoption over the past three years and a further 14% believe that there has been “great improvement” (fig 8).

Priorities for technology expenditure
To assess the fund industry’s priorities in the EU and UK for technology investment, we asked respondents to rank where they will be committing investment resources, whether front, middle or back-office functions, in regulatory and compliance technology or in website and mobile app development.

The results are presented in order of weighted-average ranking, with the highest-ranked at the top. Respondents indicated that front-office technology applications are of highest importance in technology budget allocation. Ranking slightly below this consideration, expenditure on development of websites/mobile apps and expenditure on back-office technology featured second and third in budgetary priorities, ranking almost equally in their mean weighted-average score (fig 9).

It is noteworthy that compliance and regulatory technology ranked at the foot of these weighted-average rankings. Given the significant investment that is being channelled into “regulatory technology” applications in fintech labs across Europe – and the heavy body of new legislation that continues to be applied to the investment funds industry across the EU – it will be interesting to monitor whether regulation-based technology assumes higher importance in these weighted-average rankings in times ahead. 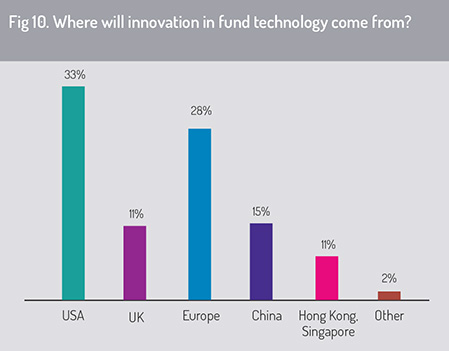