By forcing asset managers to change their working practices and embrace technological innovations, the covid-19 crisis has hastened the industry’s digital transformation.

We will remember Q1 and Q2 2020 as six months that changed the asset management world, driven by a health shock and a global economic contraction arguably more severe than anything previously witnessed in the post-1945 era.

When the post-crisis debrief commences, many will look to Asian countries for lessons that will guide public health management in the future – in terms of how they have managed virus-transmission data, organised healthcare logistics, and employed technology to quantify and manage risk.

Against this background, the past six months have had far-reaching implications for the economic outlook in Asia and globally. The International Monetary Fund (IMF) predicted in its April World Economic Outlook (WEO) that global output during 2020 will slow dramatically – and it revised down its published forecast (declared in its December 2019 WEO report) by 6.3 percentage points to -3.0%.

Each passing month has been met with further economic deterioration. In its June WEO report, the IMF amended its projection for world output downwards by a further 1.9 percentage points to -4.9%. 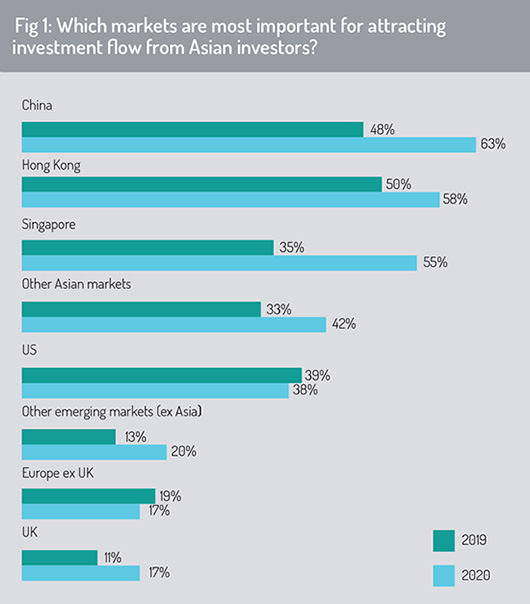 For the first time in many years, Asia’s output is projected to contract as a region (the IMF’s prediction of zero growth for Asia, in its April WEO report, was revised down to -1.6% in June). This is partly the result of ongoing Covid-19 containment measures, partly the impact of a rapidly contracting global economy.

There is optimism that China may lead the world economy out of this slowdown. China grew by 3.2% year-on-year in Q2 20, reversing a 6.8% decline during the preceding quarter according to data from Trading Economics – the first major economy to report growth as it reopened manufacturing and retail outlets after lockdown.

However, when we factor in the effects of a febrile US-China trade relationship, external criticism of the new national security law in Hong Kong, and the decision of several Western governments to exclude Chinese telecoms giant Huawei from their 5G telecoms infrastructure, this is a cocktail of uncertainties that makes it hard to predict the pace of Asia’s recovery.

For financial services, this disruption has triggered technology adaptation and changes in working practices that will have lasting effects for our industry. At short notice, the asset management world has adapted to remote working and rolled operational contingency arrangements into action that might have taken five or ten years to deliver in ‘normal’ times.

This will accelerate the digital transformation of the asset management industry – and the innovation that it offers to support fund sales, investment advice and client support through digital channels. 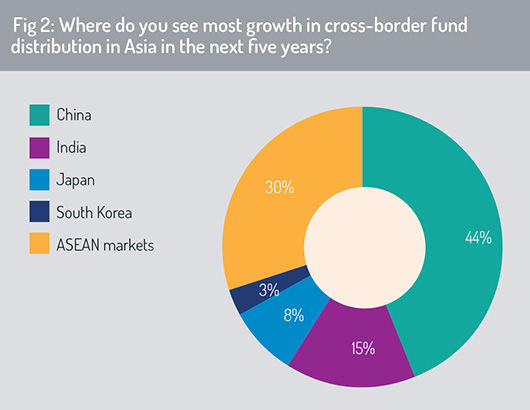 In the face of global economic uncertainties that have dominated the first half of 2020, the survey indicates that Asian investors will be seeking investment opportunities primarily within the Asia-Pacific region. The percentage of respondents that highlighted China as a primary target for investment has risen to 63% from 48% in 2019. Hong Kong has been displaced to second place, despite attracting a higher percentage of responses than last year (rising to 58% from 50% in 2019). Singapore remains third, with positive responses rising 20 percentage points to 55% over the 12 months.

Looking beyond China, Hong Kong and Singapore, 42% of respondents expect Asia-based investors to channel investment flows into other markets in the Asia region (up from 33% recorded for “Other Asian Markets” in 2019).

Looking globally, this strong appetite for investment opportunities within the Asia region has pushed the US from third to fifth. However, emerging markets (ex Asia) offer a more attractive option to Asian investors than they did 12 months ago (rising from 13% to 20%).

When asked which markets will deliver strongest growth in cross-border fund distribution in Asia over the next five years, China was again the most popular response (fig 2), as it was in the 2019 Asia survey.

However, India has become less attractive as a prospect for cross-border investment, with its share of responses contracting from 28% in 2019 to just 15% this year.

India’s large population (1.38 billion in July 2020) and expanding professional class is generating rising demand for wealth management solutions and a growth in appetite for collective investment products. But there are fears that the Covid-19 pandemic, and the economic impact of lockdown, will have a severe effect on the Indian economy over the coming year. 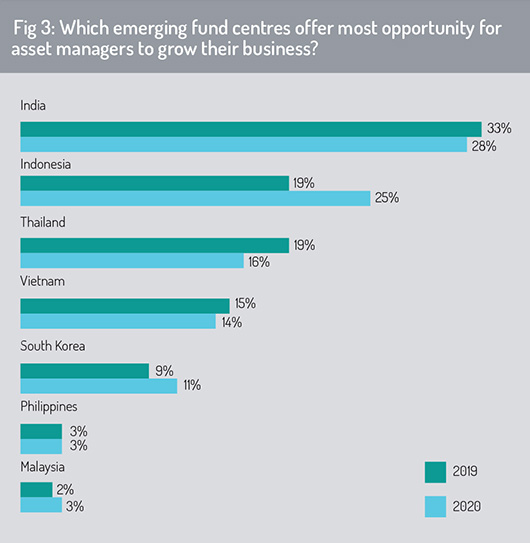 The International Monetary Fund predicts that the Indian economy will contract by 4.9% during 2020, driven by a “global pandemic that has had a more negative impact on activity in the first half of 2020 than previously forecast and a recovery that is likely to be more gradual than previously anticipated [in its April WEO update]” (IMF, ‘World Economic Outlook Update’, June 2020, page 6).

Although respondents predict a drop-off in cross-border investment flows into India, this market continues to offer strong potential for business expansion driven by domestic fund flows – a point captured in fig 3. When asked “which emerging fund centre in Asia offers asset managers most opportunity for business expansion?”, respondents named India as the dominant answer for the second consecutive year.

After India, the most important opportunities will be available in Indonesia, Thailand, Vietnam and South Korea – a ranking order that mirrors results from the 2019 Asia survey. Over the past 12 months, respondents have become more optimistic about business potential in Indonesia (rising from 19% to 25%) – although this market has failed to recapture the interest that it generated two years ago, when Indonesia was ranked by respondents as the emerging Asian market offering the best opportunities for business expansion (with 42% of overall responses).

In line with findings of the Asia survey in 2019, respondents indicated that they see little immediate rise in the prominence of Japan or South Korea as key centres for cross-border fund distribution in Asia.