In this section, we assess how the distribution channels that asset managers are using to sell their fund products in Asian markets are changing. We asked respondents to evaluate distribution channels in order of importance from 6 (most important) to 1 (least important). These were then ranked in order according to their weighted-arithmetic mean, with the highest-ranked at the top (fig 13).

In keeping with findings from the Asian survey for the past three years, bank distribution was ranked as the most important distribution channel on an Asia-wide basis with a weighted-arithmetic mean score of 5.35.

Survey results also illustrate the growing importance of fund platforms in the distribution mix. Platforms advanced from fourth to second, with a weighted-arithmetic-mean score of 4.08 – albeit still some distance behind bank distribution channels in the relative importance accorded by our survey respondents. 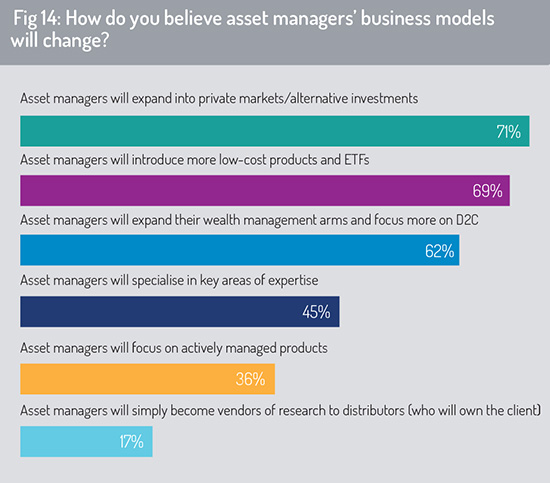 Direct-to-consumer channels are also becoming increasingly important in Asian markets, eating into the share of sales held by insurers (which slipped from second to third in the ranking order, with a weighted-arithmetic mean score of 3.57) and the independent financial adviser (IFA) channel (which fell from third to fifth, with a weighted-mean score of 3.12).

Bank distribution continues to account for a large share of investment fund sales in Hong Kong, Singapore and Taiwan, which account collectively for more than 60% of respondents to this survey. Large bank distributors are offering investors access to a range of Ucits funds on their wealth management platforms, as well as other mutual fund products that are authorised by regulators for distribution in the local markets.

Survey results confirm the rising importance of sales via fund platforms in a number of Asian markets (e.g. Singapore, Taiwan and India). India, for example, has seen the launch of a wide range of fund platforms – including Kuvera, Zerodha, Clearfunds, Groww, Goalwise and Paytm – targeting D2C investment fund sales to retail customers.

With the growth of alternatives – including infrastructure, private equity and real estate – sophisticated investors are also looking for fund platforms to make a wider variety of these fund types available from across a range of promoters and locations (fig 14). 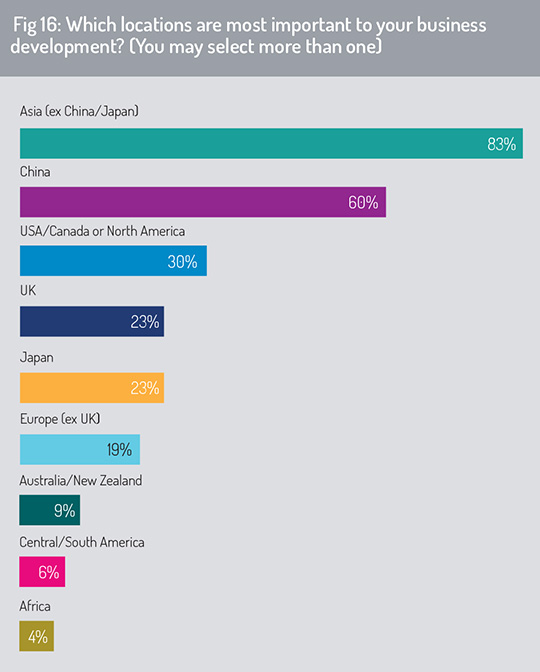 The continued rise of digital sales through fund platforms in Asia is confirmed in fig 15, where we asked respondents to predict which distribution channels will be most important in five years’ time. The survey finds that fund platforms will be the dominant channel for investment funds distribution within this timeframe – replicating the answer provided to this question 12 months ago.

Insurers will continue to lose ground in the battle for fund distribution in Asia, and the IFA channel will also see its distribution share diminish, according to respondents to the 2020 survey.

In keeping with answers to earlier questions (see figs 1 and 2), China was flagged as being important to business development by 60%. 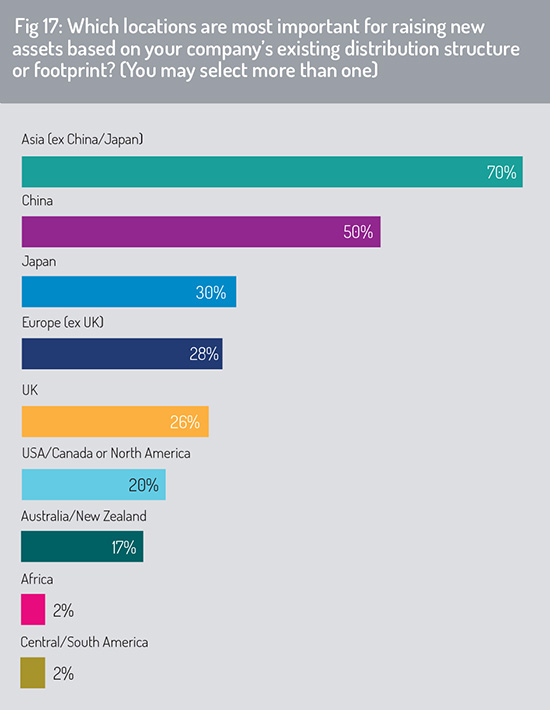 These two categories received at least twice as many responses as any other answer. North America is a priority for 30% of respondents, with the UK and Japan each highlighted by 23% of survey participants.

For those who nominated Asia (ex China and Japan) as being most important for business expansion, we asked them to name the three markets that will offer strongest growth opportunities. Hong Kong was top of the list with 62% of responses, followed by Singapore (54%) and India (40%) in second and third places.

To provide further information about the development priorities of Asia-based asset managers, we asked which regions and markets are most significant for asset-raising based on their existing distribution structure (fig 17). In all, 70% of respondents indicated that Asia excluding China and Japan offers most opportunity for asset-gathering, with China highlighted by 50% of respondents. 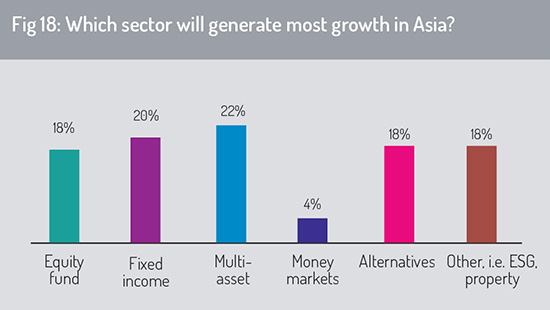 For those who identified Asia (ex China and Japan) as being most important, we asked them to name the top three markets in the region for asset-gathering. Hong Kong received the highest response rate (62%), followed by Singapore (54%) and India (40%).

The survey finds that growth is likely to be driven by a relatively equal mix of multi-asset strategies, fixed income, equities funds and alternative investments. There is also likely to be strong growth in ESG (environmental, social, governance) and investment in real estate funds (fig 18).