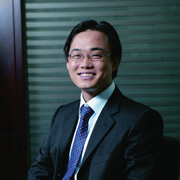 Andy Lin is the type of person that European fund managers should get used to hearing about. If investment managers from the emerging world really are to compete globally with their developed-world counterparts for the assets of the future then Lin, the 37-year-old CEO of China Universal Asset Management, is quite likely to be visible among the vanguard.

Like many of his peers he’s Chinese born and American educated. He learnt his trade in Western firms (State Street Global Advisors) and brought his experience home to create a fast-growing asset manager with designs on international expansion.

A clue to China Universal’s international aspirations is seen in its website: rarely are a Chinese fund manager’s web pages so accessible to English speakers.

The business is part of a wave of Chinese mainland managers who have hired floor space in Hong Kong over the past couple of years as their businesses seek to further internationalise.

Unlike the fund management industries of other emerging markets, Chinese managers have a strong driving force propelling them into international markets. According to Lin, it is all to do with the renminbi, China’s mainland currency.

Asked what he thought the Chinese government’s long-term strategy is for the local fund management industry, Lin says: “It is important for the government to make the renminbi a respected reserve currency and fully convertible. To do that it has to be possible to make the renminbi investible overseas. The way to keep this manageable is through local Chinese firms.”

One way of facilitating the internationalisation of the renminbi is through money market funds, which along with equity and fixed income funds, Chin Universal runs. Another way is through the so-called ‘miniQFII’, which could be a major development in local fund management.

Under this scheme, Chinese mainland fund managers will be able to establish renminbi-based funds in Hong Kong to raise money from renminbi pools sitting in offshore accounts and invest them into local-currency securities on the mainland.

“We believe cross-border investment is just beginning. Chinese investors outside of China will be huge phenomenon over the next five to ten years,” says Lin.

Yet it could be argued that there is another strategy that the Chinese government has in mind for the asset management industry. The Chinese have not been doing things by halves. Consider oil companies like Sinopec and China National Petroleum with over 600,000 and 1m employees respectively. Think of the Industrial and Commercial Bank of China with over 351,000 employees.

And not forgetting China Redstone Group, a cemetery services company in Chongqing that has a US stock market listing.

There is every reason to believe, then, that China would like to produce the world’s next Fidelity or BlackRock – in other words be home to some of the world’s largest global asset managers.

Could China Universal be it? “I think China Universal would be a credible contender,” says Michael McCormack, London executive director of Shanghai-based Z-Ben Advisors.

However, there are others that could get there first.

According to Z-Ben February estimates China Universal had a 2.3% domestic market share, ranking 12th. ChinaAMC, which describes itself as the nation’s first nationwide manager, came first with a 9.1% market share.

But whereas its owners founded ChinaAMC in 1998, China Universal’s shareholders established it in 2005.

Lin doesn’t say whether being the next Fidelity is important to him, but he is clearly proud of the firm’s growth.

“In 2005 we were the 47th company to get a fund management licence, but now we are the 12th largest by mutual fund assets under management,” he says.

China Universal launched its first fund in 2005 and raised RMB1bn (€108m) to invest in Chinese equities.

A money market fund and another equities fund followed in 2006 and the firm now has 14 funds and the equivalent of €6.9bn of assets in its mutual funds. Figures were not given for its segregated accounts business or for the prestigious mandate from China’s National Council for Social Security Fund, a sovereign wealth investor.

Lin sums up the period when he returned from the US to form China Universal as “terrible days”. Lin, who was born in China’s southern Fujian Province and educated at Fujan University, had gone to the US to study for an MBA at Harvard.

His career began after obtaining his initial Masters in Finance. Lin worked in the regulatory department of the Shanghai Stock Exchange for three years where he was involved in setting up the regulatory framework for companies. After that he spent a year in Beijing at the China Securities Regulatory Commission when the country’s first mutual fund was launched. Then he went to Harvard.

After Harvard, he stayed in Boston to work for State Street Global Advisors and says he was asked to return to China in 2004 to set up China Universal.

“People said money managers were all liars and to get away from stocks and mutual funds. There were also a lot of competitors, such as JP Morgan and Franklin Templeton.”

The shareholders in China Universal include Orient Securities and China Eastern Airline Group.

Lin adds: “We had to think how we could best compete, so we asked ourselves what are our key competencies. The answer is to be the best stock picker in China. We believe the Chinese market is not efficient and there is a lot of room for stock picking.”

The economy is volatile because policy changes quite a lot, Lin says.

“So it’s hard to make investment decisions based on face-value information disclosures.”

The firm also highlights the importance of internal processes. It has 60 investment professionals and has also sought to establish a team environment rather than a ‘star’ fund management culture.

Lin expects inflows for this team because he thinks it is time for property to be surpassed by equities as a target investment for the Chinese.

“Every year about US$5trn (€3.56trn) of GDP is created. The economy is creating wealth dramatically and this has to go somewhere. So far it’s been mainly property, but it has got to go somewhere else too, and my view is that property is no longer an asset class for investors.

“I believe the stock market will get more of that money. China’s banks are trading at 7x P/E. Some global companies are 14 and 15x. If the money does not come this year it will be next. That’s why I’m bullish about QDII. Our quota for 2010 was US$10bn.

We still have some left.”