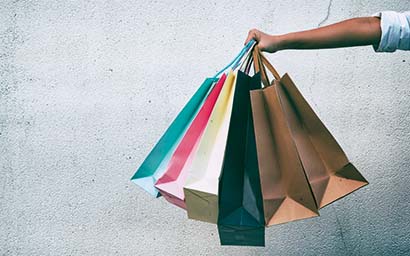 A survey of DC pension fund professionals shows that ‘value for money’ was the top reason for outsourcing their pension fund management. But the research could signal a rise in outsourcing too, suggests Nick Fitzpatrick.

Almost half of DC pension plans that have been outsourced in the past five years (either for the first time or those that changed their outsourcer) were done in order to gain value for money, at least partly.

Yet even though our survey’s respondents – a mixture of pension scheme trustees, HR managers and others – had clear reasons for outsourcing or switching providers, many said they did not know why their chosen provider had been selected.

Nevertheless, our wider findings do give pointers for drivers of outsourcing. Some are not surprising, such as investment performance and breadth of a fund range. But innovation and ability to offer retirement planning are also significant.

CAMRADATA, which owns Funds Europe, carried out the survey in October 2018 to get a clearer picture of drivers for DC outsourcing in a market that has rapidly changed in recent years. The catalyst for this has been increased government focus on obtaining better outcomes for pension scheme members. The survey is only intended to give an indication of opinions within the DC pension market and was not designed to be a statistically robust, scientific study. In total there were 47 respondents, spanning HR managers, DC pension scheme trustees, pension managers and investment consultants.

Only a few schemes had outsourced in the past five years but nearly a quarter had changed their provider.

The survey also asked by what criteria schemes would consider their outsourcing strategy successful. Not surprisingly, investment performance rated as the main factor.

Here are the findings: 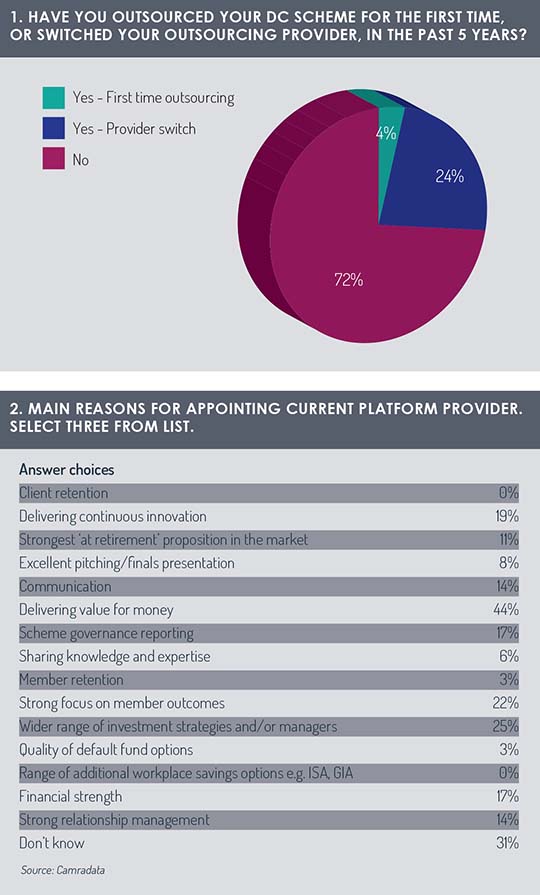 1. Have you outsourced your DC scheme for the first time, or switched your outsourcing provider, in the past five years?
Almost a quarter said they had switched their provider over the past five years, while just 4% said they had outsourced for the first time. The overwhelming majority had not outsourced or switched providers. However, some of the questions below may signal that more outsourcing activity could be expected in the year ahead.

2. What were the main 3 reasons for appointing the current platform provider?
Nearly 45% of respondents said this was about “delivering value for money”. The Pensions Regulator has put so much emphasis on this point that outsourcing for this reason is not surprising. There is a legal obligation for pension plans to assess the value they give members and schemes have to understand what elements of the pension plan contribute to this aim.

A quarter of schemes stated the reason was to obtain a wider range of investment strategies and/or asset managers and over 20% said there was a strong focus on member outcomes.

What was surprising was that 31% of respondents did not know why their current platform provider was chosen.

Other factors considered by more than 15% of respondents were platform providers who delivered continuous innovation; providers who could carry out scheme governance reporting; and providers with financial strength.

3. What do you consider to be the top three most important factors in measuring scheme success?
It would have been more of a surprise if nearly 70% of respondents felt that investment performance was not a top-three factor in DC success. But the result was entirely – and predictably – the opposite. Performance rated as a top-three priority with nearly 70% of respondents - but not too far behind was the importance of employee satisfaction. Also, the level of participation within the scheme was a significant part of the criteria. 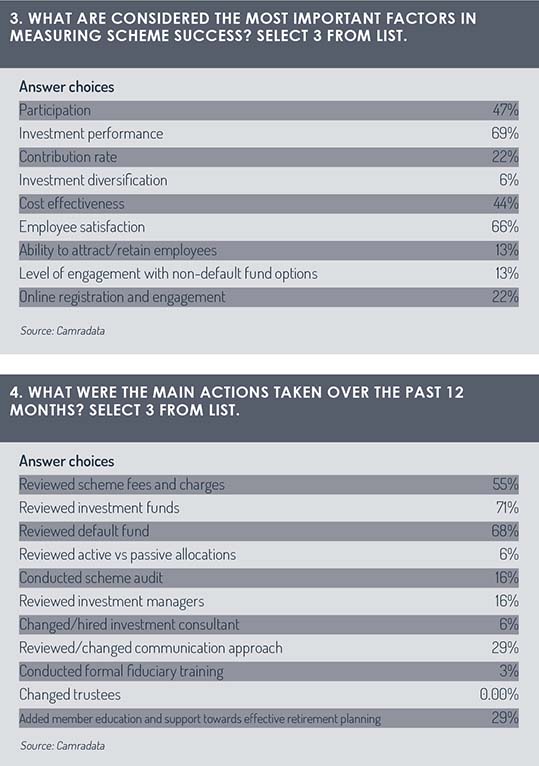 Cost-effectiveness was not far behind: nearly 45% chose this as top-three factor, which likely reflects the tight focus on DC scheme costs, where default schemes in the UK have to be managed for a very low annual management charge. Also, there is an increasing awareness among individual investors about fund management costs and their impact on returns.

4. What are the primary three actions  that your scheme, or your clients’ schemes, took over the past 12 months?
More than 70% of respondents said they had reviewed the investment funds that were available through their schemes. With little doubt - and as an earlier finding suggested - this review of investment funds is what leads a good number of schemes to outsource to another provider in the event that a scheme feels it is not offering a wide enough selection. After all, if fund ranges are too limited, it could be argued it would be harder to deliver good member outcomes, which is the mantra of the industry at present.

Similarly, nearly the same number had reviewed their default fund in the previous 12 months. Again, given the success of auto-enrolment in bringing millions more people into pension funds, the emphasis on having the right fund option is crucial.

“The allocation to equities, bonds and other asset classes varies dramatically between the default funds, depending mainly on the targeted risk levels and the range of investment tools used,” the ‘DC default growth phase survey’ for the third quarter of 2018 reported.Ultimately, risk levels are disparate and the notion that DC defaults are more or less the same is dispelled by the research.

The third most popular action carried out during this time had been a review of the scheme’s fees and charges.

5. What are the top three likely areas of focus over the next 12 months?
Again, the emphasis is on reviewing investment funds, with nearly 65% saying they would review their ranges.

As highlighted above, fund ranges are a key reason for outsourcing, and given how many schemes had not outsourced or switched providers in the past five years, perhaps a tentative conclusion would be to expect more outsourcing in the year ahead, at least among this survey’s cohort. Keep in mind that any fund review at present takes place in light of the sudden rise in market volatility in 2018. Not only that, but the UK is leaving the European Union, and in the background are gradual but certain increases in central bank rates.

An interesting finding is that half of respondents said they would be adding member education and support over the course of the next year to help provide effective retirement planning. Possibly this is why innovation rates highly among some schemes in their decision to outsource. Retirement planning is hampered by knowing just how much to contribute. The UK’s Pensions & Lifetime Savings Association (PLSA) is tackling just his issue and is expected to offer guidance in the first half of 2019.

Over 45% of respondents suggested they would continue to review their default fund and also the scheme’s fee and charges.

Following closely were costs and fees. Again, not surprising, given the weight of attention this topic gets in the press.

However, for more than 50%, a top-three important attribute of funds was that they fill a style or strategy gap.

7. When was the last time the all-in fee was calculated for the DC scheme?
Over half of the respondents stated they had calculated the all-in fees for their DC scheme within the past 12 months, while 30% did not know when their scheme last did this.

Surprisingly, 7% stated they had never calculated this number.

Again, contribution levels are a notoriously difficult area and PLSA guidance may be helpful.

Whilst outside the top three, nearly 35% considered managing income in retirement as an area that they should communicate. It is tempting to find a link here between this and the requirement for innovation. Asset managers have been under pressure to develop at-retirement, or post-retirement, products, while ‘pension freedoms’ give members more options when they retire. At-retirement savings is a more complex area than it once was and an overriding concern in government and industry is about members outliving their pensions.

Conclusion
Few schemes in our cohort had outsourced or switched provider in the past five years. But schemes are putting the emphasis on reviewing their fund ranges. Against the background of significantly changing markets due to volatility and interest rates, this could be a driver for more outsourcing.

However, performance isn’t everything. Innovation with a particular angle on retirement planning, at a time when retirees have more options at their disposal, could be an important differentiator for providers.