The S&P500 has enjoyed the longest bull run in its history, but turbulence could lie ahead. Is it time to add some protection to your portfolio?

Any avid reader of the headlines over the holidays may have assumed equity returns would have been affected by all the talk of trade wars, geopolitical squabbles and Brexit. But once again, the stock markets sailed on relatively serenely.

Barring the brief spike earlier in the year, volatility has been rather muted in developed markets, leaving them largely disconnected from all of the geopolitical tensions of recent times. As a result, valuations are still a little stretched but insufficiently so in our view to trigger a bear market in general.

The real issue is whether you believe the economic upswing can be sustained. Recent manufacturing surveys results still point to robust growth in the US and stability in China. However, results in Germany and Japan seem to have peaked. Whatever your view on what these peaks signal, it could be worth preparing for some more volatility over the next few weeks.

What goes up...
So what does happen when survey results peak? Peaks are inevitable, but they don’t in themselves guarantee recession, far from it. In fact, we can identify more than 20 peaks in the ISM since 1960 but only six recessions (two or more consecutive quarters of negative growth).

The current configuration of results suggest that while some economies are no longer accelerating - may even be decelerating – we are nowhere near recession.

Seasonally affected disorder
That said, we do expect more volatility post the summer. The S&P 500 has tended to be more volatile in October than in any other month anyway since 1990.

By definition, few can predict the nature and timing of the market’s next outlier event. There are plenty of candidates including a full-blown trade war, renewed concerns on China’s growth or the US entering an earlier-than-expected recession. Brexit negotiations will continue to dominate the front pages while the people will have their first say on the Trump presidency in the US mid-term elections on 6 November.

Get your sitting ducks in a row
Both the House of Congress and the Senate are up for grabs at the mid-terms and the Democrats could well retake at least one of them, particularly with the President’s popularity level sitting at around 40%. For all the wailing and gnashing of teeth over his policies and pronouncements, Trump has kept the equity bulls running, at least until now. US equities have, however, tended to suffer larger-than-average losses ahead of almost every mid-term election since 1962. 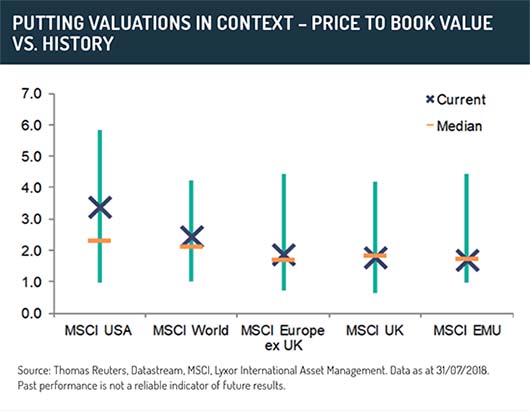 Should the Democrats win both the House and the Senate, the risk of political gridlock between the administration and Congress becomes much more concrete. But we don’t foresee any major policy changes, whatever the outcome, so tax cuts remain the biggest near-term support for the economy. That said, any such uncertainty at such a late stage of the cycle could easily lead to more volatility.

Out of sight and (wrongly) out of mind
In these conditions, protecting more of what you already have may be front of mind. There are three typical steps to portfolio protection – diversification, flexibility and the addition of alternative risk premia – but such protection doesn’t always come cheap.

Construct your portfolios differently and you can save yourself from paying over the odds. Minimum variance ETFs are designed to take the sting out of intense equity market falls and their volatility is typically 20-25%* lower than traditional market-cap-based products. Despite that, they have proven unpopular with investors this year, perhaps because of their perceived rate sensitivity – an argument that’s been given greater credence than it deserves in our view.

Favour diversification
The Lyxor FTSE USA Minimum Variance UCITS ETF comes with a TER of just 0.20% (as at 31 Aug 2018). It’s the cheapest of its kind. But what makes it special is what you get for that cost.

Most traditional volatility reducers tend to concentrate on a relatively narrow number of predominantly large-cap stocks. But why add one risk (concentration) to replace another, especially with mid-caps and broad indices having often been less volatile than ultra-liquid large-caps over the last few years?

The FTSE strategy adheres to some of the strictest diversification targets in the industry, so you hold at least twice as many stocks as you would in any of the other similar ETFs available in Europe today. It can lead to fewer specific risks, fewer valuation and crowding issues and more consistent performance.

Ready the risk reducers
Risk reduction is of course crucial. Because the strategy takes volatility, correlations and diversification targets (retaining 55-70% of original universe) into account, it tackles risk in a way few other volatility reducers can.

Over the last ten years, the US index has reduced risk by around 21%. And, when the going got toughest in the early months of this year, the results were even better. It’s also less expensive than its peers and the S&P 500 on most valuations metrics. If you’re nervous about what’s next, it could be the perfect solution.**

Why choose Lyxor for portfolio protection?
If market volatility is your concern, you can rest assured our Minimum Variance ETFs tackle risk a little differently. And, because they are more diversified than their peers, they tend to come with less rate sensitivity, which could prove crucial at a time like this. With their proven track record and TERs from just 0.20%, they may just give you the smoother ride you need.***

THIS COMMUNICATION IS FOR ELIGIBLE COUNTERPARTIES OR PROFESSIONAL CLIENTS ONLY
This document is for the exclusive use of investors acting on their own account and categorized either as “Eligible Counterparties” or “Professional Clients” within the meaning of Markets in Financial Instruments Directive 2004/39/EC. These products comply with the UCITS Directive (2009/65/EC). Lyxor International Asset Management (LIAM) recommends that investors read carefully the “investment risks” section of the product’s documentation (prospectus and KIID). The prospectus and KIID are available free of charge on www.lyxoretf.com, and upon request to [email protected] Lyxor International Asset Management (LIAM), société par actions simplifiée having its registered office at Tours Société Générale, 17 cours Valmy, 92800 Puteaux (France), 418 862 215 RCS Nanterre, is authorized and regulated by the Autorité des Marchés Financiers (AMF) under the UCITS Directive and the AIFM Directive (2011/31/EU). LIAM is represented in the UK by Lyxor Asset Management UK LLP, which is authorized and regulated by the Financial Conduct Authority in the UK under Registration Number 435658. Source for charges: Lyxor ETF, 31st August 2018.