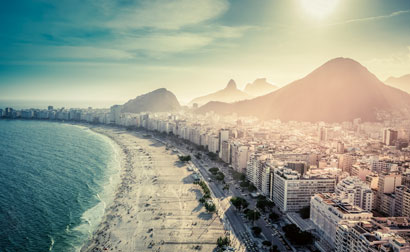 David Stevenson looks at where bond investors, starved of yields because of central banks, are finding returns. Two areas are Latin America and, of course, high yield – though the latter has been hit by defaults.

Charles Owen Prince III, the former chief executive officer of Citigroup, famously said: “As long as the music is playing, you’ve got to get up and dance.” He was referring to his firm’s commitment to leveraged finance deals on the eve of the financial crisis, but it’s perhaps an apt description for the bond market, too.

With the European Central Bank (ECB) extending its asset-purchasing programme to include corporate bonds in March, it has in essence ramped up the stereo’s volume. Investors can buy bonds and keep dancing, knowing that they have a buyer of last resort.

However, this distortion of the marketplace is both a help and hindrance to bond fund managers. It has made the bond market more liquid but is also pushing yields down to unprecedented levels, especially in the sovereign bond sector. For instance, Barclay’s Global Aggregate Index has an average yield of 1.12%, but just over a quarter of the index yields less than 0%.

With pension funds struggling to meet liabilities, income is needed. The qualifying yield for the ECB purchase of bonds is just -0.4%; more ECB purchases will drive yields down further, so pension funds are unlikely to find income easily in bond markets.

Sharpe ratios in fixed income – especially sovereigns – are usually quite low. Sovereign bonds with negative yields are issued mainly by continental Europe and Japan, although the UK recently became another issuer of negative yield when the Bank of England announced its own programme of quantitative easing (QE) last month. This pushed gilts into negative territory last seen, then quickly reversed, in the aftermath of the Brexit result.

With US treasuries being one of the only major government bonds in positive territory, the pursuit of risk could take investors into some exotic places. But there are a plethora of risks involved with this. Aside from the usual duration and default risk inherent in the bond market, when looking into emerging markets and even some developed markets, political risk is yet another consideration. The US election is not far away; Donald Trump, anyone?

FAVOURITE PICKS
Against this backdrop, what do fund managers like?

Andrew Lake, head of global high yield at Mirabaud Asset Management, likes both investment grade and high yield in the US, where yields have not been dampened by QE, unlike in Europe, and where the economic situation “is better than anywhere else”, he says.

US firm Lord Abbett has been launching Ucits versions of its most successful fixed income products to capture the thirst for yield among European investors since 2014, the firm says, and now has $1 billion in Ucits assets. Its short duration fund has attracted the majority of inflows. “Short duration is popular as there are few sources of low-risk yield and cash doesn’t provide you anything,” says Charles Barnick, head of passport investments and European representative of the firm.

Lord Abbett’s short duration fund has a Sharpe ratio of over 2% and yields over 3% after fees, says Barnick. Investors use the fund as a core holding within their portfolios and, even at the bottom of the market in 2008, the fund was down only 2% when many others were down at least 10%. Barnick says that the market tends to misprice credit at the front end of the curve and that’s an advantage for short-duration investors.

ENERGY RALLY
High yield has had a chequered recent past in the US, with poor performance impacting the asset class. However, this year there seemed to be a reversal for US high yield when, according to Mirabaud’s Lake, the first six months saw a “beta” rally as energy companies rebounded.

“People who had a poor last year had a good year this year,” he says. “The rebalancing hasn’t happened so the weaker companies will begin to struggle again. But there are good companies who have access to capital and are well run.”

Tim Paulson, who is also from Lord Abbett and is the firm’s fixed income investment strategist, says he has been concerned about the high yield energy sector for some time due to rising debt levels. He cites the telecoms bubble as a warning against using excess leverage. However, he says things have been getting better. “Valuations are now attractive despite oil prices. You’re getting paid for the risk that you weren’t two years ago.”

Although energy is not as dominant in US high yield as it was, at 13% of the index it is still a large part and energy firms have been a big source of defaults this year. According to US ratings agency Standard & Poor’s, the number of corporate defaults in 2016 so far is in line with 2009, a year after the financial crash started, with over half coming from the energy sector.

In a market like this, credit picking seems to be key. There are a multitude of high yield bonds out there, so how can investors ensure appropriate payment for taking extra risk?

‘NEWS JUNKIES’
Luc D’hooge, head of emerging market bond funds at Vontobel Asset Management, has an interest in selected countries and issues in Latin America. From an overweight Brazil position, he’s now underweight and no longer has any of the country’s sovereign bonds, for example.

Even South American firms like Petrobras that have had serious corporate governance issues can still be attractive to fund managers, including D’hooge. He views investors as “news junkies”, who start to sell as bad news breaks.

But this provides other investors with decent buying opportunities, something that D’hooge said happened with Petrobras, where he built up a 2.5% position in his portfolio (since reduced to 0.5% as the bonds recovered). This is one of the reasons D’hooge prefers bonds of companies with strong links to the state – in other words, quasi-sovereign bonds.

Colombia’s Ecopetrol is another D’hooge pick, as it is very cheap at the long end, he says, and better managed than Petrobras.

Aberdeen Asset Management is also a fan of certain parts of Lain America. Unlike, D’hooge, Brett Diment, Aberdeen’s head of global emerging market debt, still sees value in Brazil, despite the currency having sold off in the past two years.

Although Argentina has a history of defaulting on bonds, it is one of Aberdeen’s overweights in the region. However, despite the political situation in Colombia improving (now that separatist group Farc is in negotiations with the government), Diment is underweight the country, as it has not tightened it economic policy. Aberdeen invests in Latin America in both hard currency (dollars) and local currency, as the latter has areas that are attractive since countries resolved their current account issues.

AND FINALLY, CHINA…
Michael Kelly, global head of multi-asset at PineBridge Investments, sees the move into high yield and emerging market debt as a natural consequence of falling yields in core markets. He is also a fan of Latin America.

“Latin America will always be stop and go but at the moment its go for the next several years. [There is a] move towards a more business-friendly climate with less chaos,” says Kelly.

This region offers a contrast to China, the emerging market weak spot last year, he says. However, he does not write off China: it’s his third-favourite debt market behind US high yield and Latin America.

Post-Brexit, and amid the ECB’s asset purchasing programme, investors are being forced out into areas of greater risk. Here is where active bond fund managers should be able to add value with credit picks.