The share prices of Europe's largest listed asset managers have taken dips in recent weeks, despite mega-deals that could substantially transform their businesses. Stefanie Eschenbacher reports.

When Aberdeen Asset Management and Schroders put out their latest results, Ruairidh Finlayson, an equity analyst at Brewin Dolphin, says the response from the market was “brutal”.

While the share price of Henderson Global Investors also took a dip, indicating a broader trend within the sector, Finlayson says it is baffling that markets have failed to recognise the enormous potential of Europe’s two largest asset managers.

Over the past months, both have successfully completed mega-deals that could substantially transform their businesses.

Richard Phillipson, principal at consultancy Investit, says both asset managers managed to diversify their products, client base and distribution channel.

According to research from Lipper, asset managers in Europe launched more than 500 funds that emphasise on diversification.

Phillipson says both asset managers have done on a corporate level what they are recommending to their clients on a portfolio level: diversification.

“Aberdeen already had a successful franchise, but it was clear that they wanted to be less reliant on equities, in particular emerging market equities,” Phillipson adds.

“Aberdeen did not only strengthen its product range with the addition of fixed income and absolute return capabilities but also its client base because they now have Scottish Widows as clients,” he concludes. 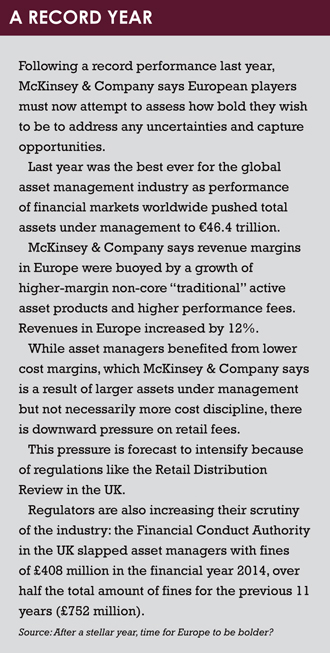 Schroders extended its business into wealth management with the purchase of Cazenove.

Finlayson is also upbeat about both deals. “If I had to invest in one asset manager for the next three to five years, it would definitely be Schroders, particularly now that it has been trashed by the market,” he says.

“If Schroders is the number one long-term pick, Aberdeen will be number two.”

DIVERSIFICATION
Peter Lenardos, an equity analyst at RBC Capital Markets, says it is Aberdeen that has the best ability to transform its business for the better following the acquisition of Swip.

“The deal diversifies the business towards UK retail, UK and Western European equity, sterling and fixed income while it adds scale and doubles the size of the property business.”

The pre-crisis years saw asset managers shifting towards specialisation; the post-crisis years have, at least so far, been all about diversification.

“Asset managers need a broad product base in as many geographies and distribution channels as possible,” he says.

“This allows them to benefit from product-specific, geography-specific or channel-specific upturns,” he adds.

Lenardos says that there was not as much consolidation as expected during and in the immediate aftermath of the financial crisis.

Today, balance sheets of asset managers are stronger and cash-rich, particularly in Europe.

“Cost bases have been rationalised so asset managers are a lot more efficient and they seem to get inflows into their higher-margin products,” Lenardos says, adding that they now need inflows.

McKinsey & Company recently declared that 2013 was the best year ever for the global asset management industry, and that the sector continues to be attractive.

In a report, entitled After a stellar year, time for Europe to be bolder?, the consultancy says that performance of the sector was fuelled in large parts by the
strong performance of financial markets globally.

Assets under management surged by 13% to an all-time high of €46.4 trillion; asset managers regained their pre-crisis market share of financial assets last year, accounting for 25.1% of total financial assets, compared to 23.6% in the previous year.

McKinsey & Company says the asset management industry remains highly attractive in terms of returns to shareholders, with average return on equity at 19% as of May, dwarfing the returns of banking and insurance firms.

Finlayson says asset managers have become more profitable because they have managed to raise assets on the back of positive market performance while costs have stayed the same.

Will Riley at Guinness Asset Management has allocated 91.3% of his Guinness Global Money Managers fund to asset managers and custodian banks.

“We like the sector because of the high return on capital we get from these companies,” he says.

“Looking at the overall performance of asset managers versus broad equities, they perform considerably better in up cycles. While they underperform in down cycles, they tend to recover quickly.”

Riley says outperformance can be attributed to the operational leverage asset managers have
to recovery.

“It is a highly volatile sector, more so than broad equities, and it tends to be the first one to decline in a down cycle but the first one to recover in an up cycle,” he adds. “Investors tend to be anticipatory: they move back into those stocks when they expect a recovery.”

Shahram Shoraka, co-chief executive officer of Omada Capital, an asset manager and advisor, says there is a lot of short-term uncertainty in European equity markets that could explain recent share price drops.

He highlights geo-political risks arising from tensions between Ukraine and Russia, and the possibility of sanctions, as well as US airstrikes in northern Iraq.

Shoraka says that the conflict in Gaza may have more of an impact on funds that invest in technology and infrastructure, where Israeli companies are important players.

“Together, they may create a snowball effect,” Shoraka says of the conflicts in the Middle East and Eastern Europe.

“Even though the long-term view may be that the equity market will do better, there is always a chance for investors to sell now and return later.”

When selecting stocks for his portfolio, Riley says the key aspect is how the underlying funds of asset managers are performing.

Guinness Asset Management has developed a scheme that evaluates about 3,000 funds managed by 150 asset managers, and screens for those that post aggregate first- or second-quartile performance.

STAR MANAGERS
More often than not, those asset managers can raise assets quicker, which, in turn, will lead to an increase in earnings and, ultimately, share prices.

The investment approach combines bottom-up with top-down analysis. Riley and his team currently favour equities over fixed income and cash, and asset allocation in the Guinness Global Money Managers fund is therefore biased towards those asset managers that focus on equities.

“Many asset managers realise that they are far too reliant on a few funds,” Phillipson says, adding that while most have a wide range of products only a few sell at any one time.

“There is high demand for absolute return, strategic bond and dynamic bond funds, but even those with a strong offering in those sectors, like Jupiter, may be thinking about diversification.” 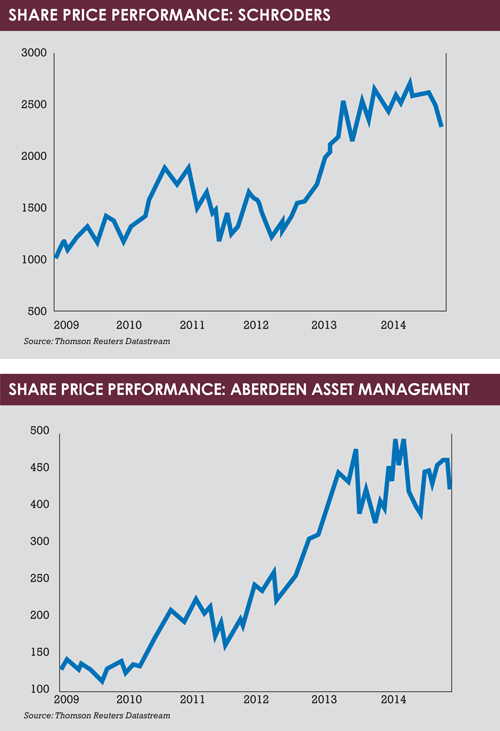 Jupiter says it is indeed diversifying its business geographically, most recently with the opening of an office in Hong Kong, and may in due course also adapt its product range to the demands of new clients.

Even specialist boutiques such as Polar Capital are diversifying, not with acquisitions but with launching new types of funds.

Polar Capital says it aims to have a diversified business comprising between ten and 12 different investment teams.

While specialised, the range comprises strategies as diverse as biotech, convertibles and Asian financials.

The acquisition of GLG Partners by Man Group in 2010 is considered one of the more expensive deals in history, but Finlayson says Man Group “would probably not exist today” if it were not for the strong performance of GLG Partners.

Since the acquisition of GLG Partners, Man Group has further added to its range of strategies, most recently with the acquisitions of the privately owned US quantitative equity manager Numeric and the credit-focused US fund-of-fund manager Pine Grove Asset Management.

Ashmore Group, which declined to discuss the issue further, has been performing well, but Finlayson says an over-reliance on a specialist asset class like emerging market debt is risky.

Recent moves towards diversification appear to be in contrast to earlier mega-deals among listed asset managers, such as when Henderson Global Investors, which was unavailable for comment, bought New Star Asset Management in 2009 and Gartmore Investments in 2011.