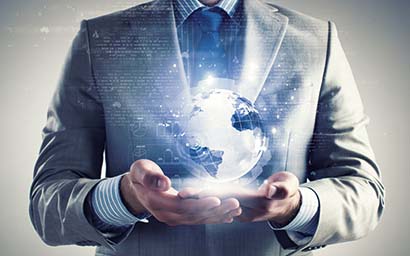 Jeremy Gleeson explains to a Funds Europe webinar audience why he and his team at Axa Investment Managers segment their Digital Economy fund into four themes.

Advertisers spent more on digital than on traditional TV for the first time last year – demonstrating how quickly the digital economy is expanding. Such developments led Axa Investment Managers to supplement its Global Technology fund with a Digital Economy fund in October 2017.

The fund is managed by Jeremy Gleeson, who also runs the firm’s Global Technology fund, which has posted 106% cumulative excess returns over the MSCI World Information Technology Index since 2007.

In a Funds Europe webinar in September, Gleeson revealed to our group editor, Nick Fitzpatrick, that he walks the digital walk in his private life as well as at work, wearing an Apple watch and using Amazon’s cloud-based voice service, Alexa, at home. But more importantly, he shared his thoughts on digital technology’s future and the best way to invest in it.

First, the broad brush. Gleeson explained to the audience that his investment strategy has been thematically led for some time. A combination of bottom-up stock-picking and a focus on companies that are driven by long-term investment themes, means that if specific sectors – or even equities – rotate out of favour, investors should still make money over the long term.

Next, the detail. The theme at the heart of the Digital Economy fund is the “connected consumer”.

Two webinar quizzes revealed how pertinent this is. Asked how many hours of content are watched every day on YouTube, 75% of the audience said 1 billion hours, and 25% said 500 million hours. The majority was correct: 1 billion hours. On the number of digital devices now connected to the internet, the audience guessed between four-to-16 billion, and 20% got it right with 8 billion.

To capture the full breadth of the digital economy at which these numbers hint, Gleeson and his team at Axa IM invest across the entire e-commerce value chain and also in companies that provide businesses with services that enable them to transform digitally.

Primary search
“Digital transformation is something we will hear more about in coming years,” Gleeson told the audience, as he explained his “four Ds” approach to the fund: the subthemes of discovery, decisions, delivery and data enablers.

Gleeson plays the discovery sub-theme, which covers online interactions between consumers and the businesses that want to sell to them, through digital channels, by investing in some of the world’s leading search engines. Search is still a primary way for consumers to discover what they want to buy and for advertisers to get in front of potential clients.

Examples of investments that fit into the subtheme include Adobe, which provides marketing and content creation technologies, and HubSpot, a platform that allows small and medium-sized enterprises (SME) to engage with potential customers online.

Within the subtheme of decisions lies digital marketplaces such as Amazon and Alibaba, but also business models that are emerging because of the digital economy. Gleeson cited the example of video games, where manufacturers now have more interaction with clients, which helps them to monetise products and to understand which parts are successful.

Related to this is the subtheme of delivery, where Amazon excels. Companies with poor delivery can expect to meet the fate as Toys ‘R’ Us, which recently went bust. What Toys ‘R’ Us perhaps should have done is use one of the best-of-breed third-party processing and fulfilment suppliers that form part of Axa IM’s Digital Economy fund’s investment universe.

“This is very significantly different from a traditional technology fund,” the fund manager told the audience. “We invest in fintech, in logistics firms and also in real estate, particularly companies providing industrial real estate for fulfilment centres.”

Delivery supremo Amazon is emblematic of the Digital Economy fund’s universe in two ways. First, it indicates the fund’s diversity across market capitalisation. The fund doesn’t shy away from mega companies and invests in all the FAANG (Facebook, Apple, Amazon, Netflix, Google) stocks, which spreads the risk. But at 13%, its exposure to FAANG is lower than that of many tech funds, Gleeson said, and about 45% of the fund’s portfolio is in SME.

“We are very well diversified in this fund by design, not by accident,” he said.

Second, Amazon, which has been around since 1995 – although the power of its platform has been recognised only in the past few years – exemplifies the kinds of companies the fund seeks: ones that increase their market penetration over time.

Axa IM typically might not be the earliest investor, instead going in when a technology starts to be adopted. This removes early-stage risk but still leaves room for significant returns.

“We take smaller positions in SME to begin with and when we see them hit milestones, we increase our holding,” said Gleeson, who is a long-term investor in Amazon and bought Facebook 12 months after IPO. “We’re willing to take on risk but we do it in a fairly precise way.”

Third-party help
The final subtheme of data enablers is about companies transforming themselves to meet the challenges of the digital world. Many don’t have the resources to do this and must partner with a best-of-breed third-party supplier. Gleeson highlighted the example of Zendesk, a California-based company with Danish founders that helps companies to engage with customers online during and after purchase.

Looking to the future, the webinar audience heard Gleeson say he saw two long-term drivers of digital transformation. One is technological advances. Increasingly, we are comfortable transacting online and carry around smart devices that allow us to do this on the move. The other is demographics.

“Millennials are reaching their peak spending years and will spend more disposable income through online channels than parents,” he said.

As digital transformation happens, everyone, of course, is looking for the next Amazon. Gleeson ended by highlighting the potential of a company familiar to many that recently expanded through acquisitions – PayPal – but was wary of appointing an Amazon successor. “It might be a long time before we can claim to know what the next Amazon will be,” he said.