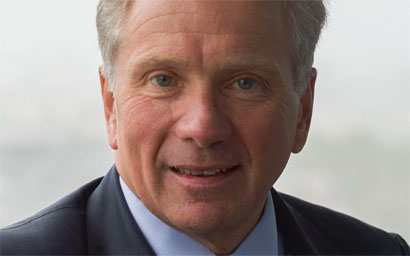 Jean Raby, the new head of Natixis Global Asset Management, tells Mark Latham of his plans to turn the group into a truly pan-European operator.

Back in Paris after an overnight transatlantic flight, there is, despite the lack of sleep, a spring in the step of Jean Raby as he strides into his office on the Quai d’Austerlitz.

Since taking the chief executive job at Natixis Global Asset Management in February, living out of a suitcase has become the norm for the energetic 53-year-old as he travels the world, meeting investors and the sprawling French investment group’s management teams.

Owned by France’s second-largest banking group, BPCE, Natixis GAM employs 3,650 people in 22 countries. It has more than 20 affiliate brands (including Chicago-based Harris Associates, the investment boutique DNCA , Mirova and H2O, which specialise in fields such as property, private equity, fixed income and equities) and has more than $951 billion of assets under management.

Given its acquisitive streak, the expectation is that the world’s 15th-largest asset manager will soon reach one trillion dollars of assets under management, particularly if a rumoured merger with Axa Investment Management is finalised.

Raby had been in Boston the previous day for the opening of the firm’s new US headquarters. The investment in a new hi-tech, low-energy building makes sense, he says, since “the US is the most important asset management market in the world and will remain so for the foreseeable future.”

He says the move into what is described as Boston’s most sustainable office building, powered by solar and wind power, is a reflection of the importance Natixis attaches to environmental, social and governance (ESG) values and investing.

“Today ESG is a label but it will increasingly be part of the mainstream,” Raby says.

Though the firm’s assets under management are evenly split between the US and Europe, he sees the largest growth prospects for the next decade in Western Europe and the Asia-Pacific region. “We could have a bigger presence in the UK, Germany, Switzerland, Italy and to a lesser extent Spain,” he says, leaning forward in his chair and tapping the mahogany table top to emphasise salient points. “All these countries matter but the first four are the key markets.”

Growth plans
“I would like to believe we can be a real pan-European investment manager. Today we are more of a French investment manager with a European presence,” he says, referring to the firm’s brand image.

After years in the economic doldrums, Europe is finally beginning to catch up with US growth, he believes.

“The mood has changed in Europe and we have seen some signs of economic growth accelerating but I think what has accelerated even more is the perception that Europe is now on the right path to recovery,” he says.

“Europe has not solved all of its issues, nor has France, which still has two trillion euros of debt – but compared with where we were six months ago, there has been drastic change.”

Although there is still an element of “wait and see”, Raby is optimistic for the French economy following the election of Emmanuel Macron as president in May. “So far, so good I would say, both on labour and on fiscal reform,” he says of the new French administration.

“The mood has changed and business confidence is about mood, so it helps. The labour reforms may not be the epitome of everything that we need but they are going in the right direction.

“Of course, the country needs to reform itself. France is at a crossroads and either we adapt or we are really going to fall behind.”

Raby also expects the firm to grow its presence in Asia-Pacific, a region “where we are not as much present as we would like to be” and in which Natixis has some $49 billion of assets under management.

Although tweaks will be made here and there, he sees no need for fundamental change. “Six months into the job, I do believe we have the right business model and I have no intention of changing it,” he says. “The multiaffiliate business model is a competitive advantage for us.

“I am fortunate in being able to work on the margin and don’t need to go for fundamental change. Excellence is measured at the margin.”

French-Canadian
The fact that Raby – a former corporate lawyer, Goldman Sachs partner and chief financial officer of French telecoms giant SFR – hails from Canada’s French-speaking province of Quebec probably helped him get the top job at Natixis, he says. The post was previously held by the group’s longserving former boss, Pierre Servant.

“Québécois are North Americans who speak French: they are not French people living in North America,” the Harvard and Cambridge-educated former investment banker says.

Although Natixis has made some forays into passive investment, most notably with the launch last year of an exchange-traded fund in the US and through the acquisition in 2010 of smart beta specialist Ossiam, Raby is committed to the traditional high-conviction, actively-managed way of running funds.

“When it comes to the active-passive debate, we don’t want to compete in the passive space,” he says. “It’s a race to the bottom in terms of fees and there are shortcomings to indexing.

“Where we see the biggest opportunity is the pool of actively managed asset classes – whether that be equities or fixed income – of which about a half is either in chronic underperformers or what we would call low-value added products.

“It is the assets in the middle, about half of the actively-managed asset classes, which is the money we want to go after.”

Raby adds that expansion into the alternative investment space – which includes private equity and hedge funds – is another area of interest for Natixis as it seeks to offer investment diversification opportunities.

With less than three months until the EU’s revised Markets in Financial Instruments Directive (MiFID II) comes into force, Natixis and its affiliates have yet to decide on whether to absorb the cost of broker research and analysis or pass the cost on to investors.

While most large asset managers have so far said they will absorb such costs on to their own balance sheets, Raby believes that this is a decision best taken at the affiliate rather than the group level, as it ultimately depends on investment strategy.

“The transparency that MiFID brings will, I believe, reinforce our competitive advantage and help our business model.