Cutting equity exposure and increasing allocations to alternatives is one way that pension schemes have been adapting to the 'new normal'. Fiona Rintoul looks at how asset allocation is evolving.

It’s a tough time to be an asset allocator in Europe. Safe-haven assets are thin on the ground, and finding pockets of growth is trickier than ever. And if it feels like things have been like that for a while, that is because they have – with no upturn in sight. So long has the crisis endured, in fact, that people are starting to say the J-word.

“When the crisis started, everyone was saying that it wasn’t like the situation in Japan, but as time goes on it looks increasingly like that,” says Jeremy Armitage, head of strategy research at State Street Global Markets. “We can no longer think of this as cyclical. It’s becoming a secular environment.”

This puts pension funds – especially those that are committed to providing real returns to beneficiaries – in “an awful position,” he says. “It’s difficult to see where returns will come from on a nominal basis, never mind on a real basis. In Europe, it’s worse than Japan. At least in Japan, government bonds still have a risk-free yield. In Europe – and the US – that’s not the case.”

None of this makes it any easier for pension schemes to get out of what Phil Edwards, a principal at Mercer Investment Consulting, describes as “the hole they are in”.

The right mix of growth and liability-matching assets is different for each scheme. Many are putting in place five, ten or 20-year plans to return to full funding. Often a key consideration is the strength of the company covenant.

“Some schemes take reasonable risk and have about 50% in growth assets,” he says. “Others are more worried about the sponsor.”

‘The new normal’
They do this in a profoundly altered environment. The crisis has meant that asset allocators have had to sharpen their understanding of what constitutes “normal”.

“Pension funds used to have the view that they could achieve an optimal mix to match their liabilities,” says Paul Kemmer, head of asset solutions at P-Solve, another investment consultancy. “That depends on a normal distribution of returns, but there have been more black swan events than a normal distribution would imply.”

Indeed, some believe that the problem of dealing with what Pimco, the world’s largest bond manager, has dubbed the “new normal”, where black swans are popping up all over the place, cannot be solved by asset allocation alone.

“It’s no longer about how pension funds can shift their portfolios to achieve their objectives,” says Armitage. “There has to be a much more elevated debate at the trustee level about what to say to beneficiaries about the long-term outlook of their fund.”

However, that does not mean there are not asset allocation changes that pension funds can and should make in response to the changed environment. Thus far, the headline trend has been to cut equity exposure and bump up investment in alternatives.

The Towers Watson Global Pension Assets Study 2012 (covering Australia, the UK, the US, Canada, Japan, the Netherlands and Switzerland) shows that over the past 16 years allocations to equities, bonds and cash have all been reduced by varying degrees, while investment in alternatives has risen from 5% to 20%. Within that broad trend, equity investment fell sharply between 2007, when it stood at 55%, and 2011, when it fell to (an estimated) 41%. 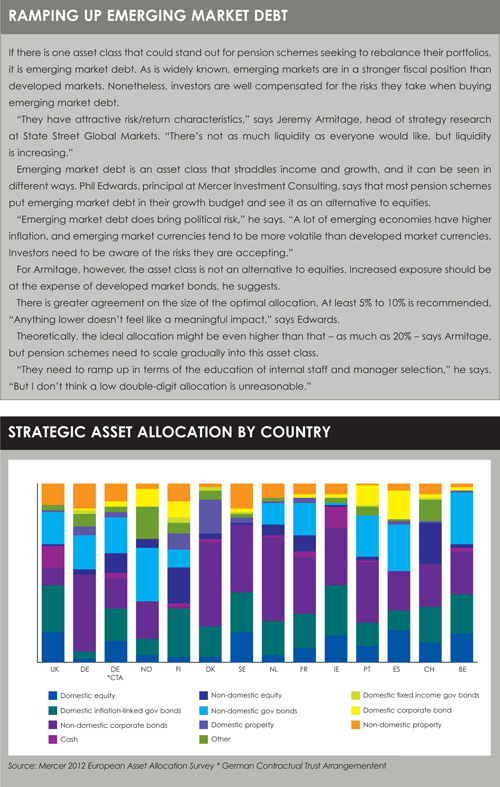 Mercer’s European Asset Allocation Survey 2012 shows a similar trend within Europe. European pension funds have turned their backs on equities – particularly domestic equities – in favour of alternatives. Fifty per cent of schemes in the survey now hold alternatives compared with 40% in 2011.

“Alternative allocations have jumped up materially,” says Edwards. “Pension schemes want to reduce risk but with yields this low they don’t want to lock into government bonds at this level. Alternatives are the answer.”

Pension schemes are both investing more in alternatives and investing in a broader range of asset classes that are less traditional.

One of the most popular is emerging market debt (see box), but new asset classes such as private debt, which would not have been included in portfolios five to ten years ago, are also attracting investment from pension schemes.

“Small to medium-sized enterprises have traditionally accessed finance through banks, but banks are moving away from that space,” says Edwards. “Pension funds and other investors who are willing to step in can achieve quite attractive rates of return.”

Other newer alternatives include infrastructure projects such as public-private partnerships in the UK and high-income property mandates such as ground lease mandates.

“There’s quite a lot of illiquidity in ground lease mandates, but as an alternative to corporate bonds – if investors can accept that illiquidity – they are often attractive.”

But, of course, a large portion of a pension scheme’s assets are still in equities in many European countries (see chart).  The question then is how to handle that allocation.

One way to control the risks within the equity portion of a portfolio is through quality-biased mandates or a low-volatility equity allocation.

Sometimes this is combined with increased exposure to emerging markets in a kind of barbell approach that has safety at one end and riskier growth-generating assets at the other.

“Many pension schemes are building on their allocation to emerging markets because their exposure is below market cap weight,” says Edwards.

Rotation
Approaches to the bond portion of the portfolio have also changed. With developed-world sovereign bonds not providing the safe haven they once did, pension schemes typically invest in a wider range of bonds. They also need to get more from their bond investments to compensate for low-growth on the equity side.

“We drive the bond portfolio to make returns like we would from equities,” says Kemmer.

Pension schemes are also looking for new approaches to bond portfolio management. These include buy-and-maintain mandates. “Clients ask me to build a well-diversified portfolio of debt and then hold it to maturity,” says Edwards.

But responding to the “new normal” is not just about asset allocation choices; it is also about being ready and willing to rotate assets.

This demands a different, more engaged approach from trustees, says Kemmer. Or, to put it another way: “You need to think about what you can’t see coming. You need to be able to move quickly out of asset classes if they become over-valued.”

To achieve this, trustee groups need to meet more often and be proactive. Sometimes they are prepared to do this, and sometimes they are not. Those that are not may employ a manager who can take a rotational approach to different assets or use a fiduciary manager.

And then there are the very big, difficult jobs that need to be done. Three to five years is the window when things switch from tactical to strategic, says Armitage. Consultants are preparing for review meetings and they may need to rip up past assumptions – and not just about asset allocation.

“There has to be much greater push-back on government, a much greater cri de coeur from pension funds,” he says. “In some ways, pensioners are the most vulnerable members of society. These people are the losers in this world of financial repression.”