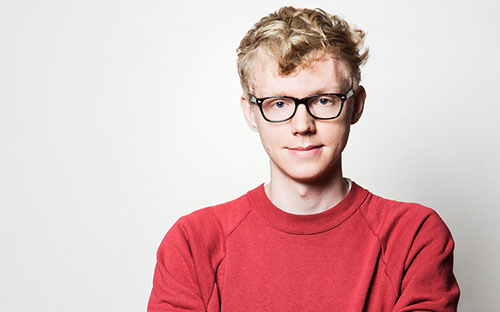 Entrepreneur Oliver Rees spoke at last November’s Société Générale Securities Services inaugural Investor Summit in Paris on why true disruption is about the way your company thinks, not the way it looks.

Three and a half years ago I left my safe, paid-at-the-end-of each-month, job to start a start-up. At the beginning, our company was very much a “paint by numbers” kind of organisation. We read all of the venture capital blogs, ordered as many branded t-shirts and mugs as we could and headed to the nearest coffee shop — fulfilling just about every start-up cliché possible.

After a few weeks our product, a cyber security phishing platform, started to get some attention. We received an email with the subject line “vulnerability in your site!” and the body “hook [our company name] have a bug bounty programme?” (A bug bounty programme rewards hackers for finding vulnerabilities – usually with cash).

This email is as close as a hacker can come to asking for a ransom without writing: “pay me money or I will hack your website”. The problem was, we had no money. We’d just quit our jobs. So what could we do? In my previous jobs I’d have instantly called I.T. But now, I was I.T. We thought about what else we had access to and our eyes came to rest on the mugs and t-shirts. I emailed the hacker to say we didn’t have money but..would he take a t-shirt? After a nervous wait he told us that, though unusual, given our mitigating circumstances, in this instance he would accept it in lieu of payment.

Since that moment I came to realise that the kind of mindsets you need to get a start-up off the ground are fundamentally different to the mindsets required to sustain an established company. In an established company I would never have engaged with a teenage hacker from half way round the world, I’d have reported him to HR! People often point to the trappings of disruptive companies: the workspace, the business model, the technology, yet it’s relatively easy for large companies to copy these elements. Sitting in a WeWork with the latest MacBook is easy - fundamentally changing your mindset and way of thinking is not.

We ran the cyber security start-up for about two years, after which I founded OR/innovation, a company that helps companies of all sizes experience these new disruptive mindsets. There are many disruptive mindsets, but some of the most powerful revolve around transparency, openness and collaboration. The mindsets are often technologically inspired but are not technologically dependent.

Monzo have recently created an open careers framework, in the same way you’d create a piece of code: clear data points that are required for team members to be able to get a promotion. Rather than relying on managers to make subjective and potentially biased promotion decisions, the data-driven decision-making mindset has allowed the company to create a much more egalitarian culture – using a way of thinking rooted in technology.

Coping with disruptive companies isn’t about becoming one yourself, it’s about learning how these new companies think and then mimicking some of their mindsets.

Adopting new ways of thinking doesn’t just protect your organisation from the disruptive headwinds of the future, it helps you thrive in these new environments too.

Oliver Rees is the founder of the OR/Innovation consultancy firm.