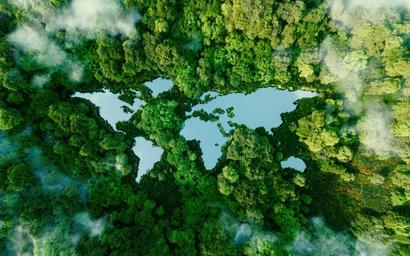 Victoria Leggett, head of impact investing at Union Bancaire Privee (UBP), this week presented a wish list for COP27 and COP15, pushing for robust implementation of frameworks produced during the conferences.

Leggett said that, amid the biodiversity and climate crises, COP27 and COP15 occurring in the same month “highlights” the interlinked nature of the climate crisis.

“We have made significant progress with climate in terms of targets, disclosure and acceptance of what must be done,” she commented.

However, Leggett noted that the world is “significantly” behind with its environmental goals and stressed the need to develop a nature-positive economy alongside climate-positive to reach net zero by 2050.

2) Climate Finance: $100 billion at last
The target of raising $100 billion per year from developed countries to address climate change is a “historic promise” that has been reneged, stated Leggett, that could find a resolution at COP27.

IMF estimates that low- and middle-income countries will need $2.5 trillion of external financing by 2030.

Investors call on governments for climate action ahead of COP27

“We think there is a reasonable probability of success on that front,” she added, in the goal of meeting the $100 billion commitment in the near term.

3) Global solidarity
The issue of loss and damages is also high on the agenda. “As investors, this is not our area of focus,” remarked Leggett. “Still, we recognise that any show of global solidarity on that front is key to mobilising a majority of countries, particularly among low- and -middle-income countries.”

Since COP27 is presented as “a COP for Africa” and various countries like Pakistan made headlines this year after being hit by climate-related consequences of global warming, “we hope that progress can be made in that area, without being too sure of what form it could take,” remarked Leggett.

4) A global carbon market?
Negotiations around article 6 of the Paris climate deal have stalled, rued Leggett, and prevented the creation of a global market in carbon credits. “We hope for progress on this, but only if it doesn’t come at the expense of the quality of the credits that will be traded.”

Evidence of this is seen in the voluntary carbon reduction projects, said Leggett, with a lack of a proper regulatory framework leading to a lack of credibility for many offset projects, and this, in turn, “makes it difficult to assess the carbon emissions reduction plans of many private actors”.

An agreement on a high-quality global carbon market would be “excellent” news, she added.

5) Regulating net zero claims
There are many companies that support the Science-Based Initiative, highlighted Leggett, and regulation can accelerate the pace of change.

The decision by the UK to mandate the disclosure of climate plans for all large companies marks a step in the right direction, highlighted Leggett, and the development of groups that organise commitments at the sector level, including the Net Zero Asset Managers Initiative.

The United Nations mandated an expert group to work on this topic this year, with some of its initial conclusions likely to be discussed at COP27.

Leggett also presented a wish list for COP15, which takes place in Montreal, Canada, this year. The 15th Conference of the Parties to the United Nations Convention on Biological Diversity, or COP15, will cover issues related to the conservation, knowledge-sharing and financial policies associated with biodiversity, from as big as whales to microscopic organisms.

Leggett emphasised the need to agree upon and implement all 22 targets set under the ‘Biodiversity Framework’ at COP15, including “how to finance the goals that underpin the framework”.

The targets concentrate on the mission to halt and reverse biodiversity loss. The WWF’s ‘Living Planet Report 2022’ found wildlife populations declined by an average of 69% in the past 50 years, raising the alarm for stakeholders to act.