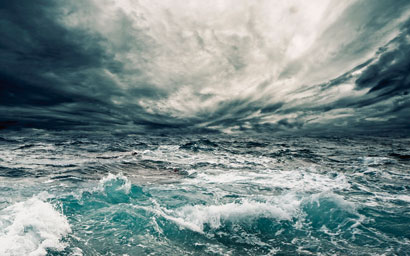 Fiona Rintoul looks at how multi-asset portfolios may be changing against a backdrop where central banks are moving to normalise interest rate policy.

On the surface all is calm. The metaphorical sun is shining and the wind has dropped. The macroeconomic background looks benign for investments.

“There are reasons to be positive,” says Erik Knutzen, CIO, multi-asset class portfolios at Neuberger Berman. “A rare period of globally synchronised growth is coinciding with stubbornly low inflation.”

But old sea dogs sniff the air and smell a storm brewing. Or, as Joachim Fells, global economic advisor at Pimco, and Andrew Balls, Pimco’s CIO of global fixed income, put it in a recent report, this is as good as it gets.

“It’s easy to get lulled into complacency by synchronised global growth, easy financial conditions and super-low economic and financial market volatility,” they said.

The risks are many – the rise of populism in the developed world, the situation in East Asia. But, assuming nuclear winter doesn’t hit just yet, the most immediate challenge for asset allocators is beyond all question the fallout from central banks’ changing policy.

The need to adjust that central bank policy matters so much that it is in some ways a problem in itself.

The hugely unconventional policy pursued by central banks in the developed world since the global financial crisis has pushed them centre-stage in a way that isn’t natural to them. We can argue about whether this is healthy or not, but investors are nevertheless obliged to behave accordingly.

“Central bank activity has been and looks to continue to be a key driver of market activity,” says Knutzen at Neuberger.

Now that central bank policy is changing, with the Federal Reserve raising rates twice this year and chairwoman Janet Yellen revealing that the Fed plans to keep raising its benchmark interest rate despite inflation remaining weak, investors need to adjust.

“We are nearing the end of this core cycle,” says Florian Ielpo, head of macroeconomic research at Unigestion. “It may be one year or it may be three years. We spend a significant part of our time looking for hedges.”

Hunting grounds include the foreign exchange markets and long/short strategies that can create some diversification.

“We are looking for a replacement for bonds,” says Ielpo.

He isn’t the only one. High-quality government bonds in particular, which used to be the default choice when it came to portfolio diversifiers, can no longer deliver in the light of very expensive valuations in developed bond markets and the changing macroeconomic backdrop.

“We multi-asset investors have to find different ways to structure the defensive parts of our portfolios,” says Hartwig Kos, vice CIO and co-head of multi-asset at SYZ Asset Management. “We choose to do this by owning different types of duration and emphasising spread over duration.”

One example from the SYZ Asset Management portfolio is a US dollar-denominated Portuguese government bond.

“This bond trades above 4% and, considering that we are currently happy to own US dollar-denominated assets and that the economic progress made by Portugal recently earned it a rating upgrade by S&P, this has been an excellent asset for our portfolios,” says Kos.

Others prefer to stay away from the bond markets altogether, seeing no point in holding securities purely for diversification.

“Look at the numbers,” says Paul Flood, manager of the Newton Multi Asset Income/Multi Asset Diversified Return fund, highlighting the 40% of high-yield bonds in Europe that have a yield lower than 2%, and the European investment grade bonds that yield 1%, which is lower than the European Central Bank’s (ECB) inflation target.

“We prefer to hold cash or low-duration bonds to avoid significant capital loss at the longer end.”

The emerging markets bond sector is more promising, but Flood is still cautious.

“We don’t have a huge allocation but we do have some short-dated exposure,” he says.

“If you look at debt/GDP dynamics, some countries look to be in a much better place, but they are at the whim of capital inflows from international investors.”

Although the tightening – or normalisation of central bank monetary policy – that the likes of Unigestion is hedging against has been signalled and anticipated, it has been a long time coming.

Perhaps as a result, complacency is a word you hear a lot at the moment. There is a feeling abroad that markets aren’t ready for the change to come, however absurd and manifestly unsustainable some current interest rate numbers may be.

“Interest rate markets have been complacent in anticipation of quantitative tightening,” says Sandra Crowl, member of the investment committee at Carmignac. “The writing has been on the wall that, with 2% growth and a 2% inflation rate in Germany, European deposit rates cannot stay negative with ten-year rates at 30 basis points. That means real rates are negative 1.7%.”

Time to tighten up
All eyes have been on the Fed, but Crowl believes the European Central Bank has already started tightening too. It’s been buying more Italian bonds, but only negligible amounts of German bonds over recent months, she says, and the average maturity has descended to below five years.

Then there are the risks created by the quantitative easing policy itself. As a result of this policy, $8.8 trillion of the world’s bonds are trading with a negative yield, according to Newton’s Flood—an improvement on the 2016 peak when nearly 30% of the fixed-income universe was on a negative yield.

For Flood, this weird and perplexing situation—created by government bail-outs and changing policies in developed markets spurred by the global financial crisis—simply isn’t capitalism.

“Capitalism is: you take a risk and if you fail you lose money,” he says.

“This is the socialisation of the capitalist system,” he adds.

From a corporate standpoint, the policy has created unintended consequences. One is low productivity growth.

“You have to ask yourself why productivity growth is so low,” says Flood. “With low interest rates any business can thrive.”

Another consequence of the unprecedented level of intervention in the economy by central banks is that asset managers have had to become central bank watchers – a job they didn’t train for and to which they may be very unsuited.

“Central banks have had a massive impact on investments since 2008,” says Ielpo at Unigestion. “If you get caught on the wrong foot, they may be a source of risk. To us, the main risk is if there is a policy mistake.”

This is a funny kind of capitalism, and there may be a price to pay further down the line.

“Our whole role is to allocate capital efficiently,” says Flood. “Over the past ten years, the entire asset management community has been chasing what the central banks are forced to buy.”

Of course, for the asset allocators watching the central banks the question is not whether the policy is right but how to invest clients’ money in light of the policy. For Flood, this means moving away from a traditional 60/40 split between equities and bonds.

“We prefer to be in alternative areas of the market, such as renewable energy and infrastructure investments, including toll roads,” says Flood.

At Unigestion, a solution has been to be overweight inflation-linkers and have long commodities, such as metals and oil. Ielpo is also positive on the equity markets, particularly in emerging markets. They are benefiting from the sharp rise in the US dollar and the collapse in commodity prices. But beyond that, there is ongoing story of the shift in emerging markets from export-driven economies to economies powered by domestic consumption.

“Emerging consumers have rarely been in such a good position,” says Ielpo. “The confidence of the emerging consumer is very high. They are better off and they know it.”

Flood also sees opportunities in emerging markets, where countries have avoided the kinds of policies pursued by central banks in the developed world. Countries such as Mexico and India, which have positive demographics and don’t have a large debt/GDP burden. But Flood also sees pockets of value in the US and Europe.

“Small business sentiment is high in the US,” he says.

Wherever fund managers look for value in a changing world, there is one constant: risk-free assets are in short supply. Perhaps the single biggest impact of the changing macroeconomic environment in developed markets is therefore that in order to achieve a return, portfolios will have to take on more risk.