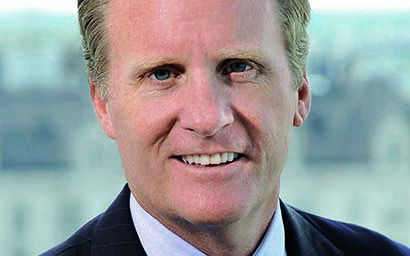 US fund giant PGIM Investments has raised $2.5 billion into its Ucits fund range since launching in Europe five years ago. Chief executive Stuart Parker tells Mark Latham about the firm’s expansion plans and the challenges of breaking into the European market.

PGIM Inc, the $1 trillion (€0.8 trillion) investment management business of US insurance group Prudential Financial, has risen to become the ninth-largest fund manager in the world since its founding in 1875.

But it was only five years ago that PGIM Investments – the worldwide distribution arm of PGIM Inc – moved into Europe, since when it has become the firm’s most important business region outside of the US.

Despite the steady overseas growth, the firm’s genial chief executive Stuart Parker concedes that the PGIM brand is still a long way from being as well known in Europe as it is in the US.

“We are the trillion-dollar manager that no-one has heard of,” he cheerfully admits. “Sometimes our boutiques are better known than PGIM itself is.”

The company kept its logo of the Rock of Gibraltar, chosen to signify strength and solidity.

In the US, this is done through ‘40 Act’ mutual funds and in Europe through PGIM’s Dublin-domiciled Ucits fund range, run by fund managers in London and Newark, New Jersey. Last year the Ucits funds’ equity, fixed income and speciality assets rose 30% to $2.5 billion in the year to December and 91% outperformed their benchmarks.

While the New Jersey-based firm has in recent years been making inroads into Asia (with funds currently distributed in Vietnam and Singapore), its 26 Ucits funds are now available in 13 European countries. Of these, 16 funds are available in the UK.

So far, the push has mostly been into northern Europe – particularly the UK, the Nordics, the Benelux countries, Germany and Switzerland – but PGIM funds are also available in Spain and to institutional clients in Italy.

PGIM Investments’ assets under management (AuM) stand at $100 billion, with $98 billion in the US, $1.4 billion in Europe and $159.2 million in Asia. These figures are impressive when compared with the $16 billion of assets it managed in 2008, as the global financial crisis was getting underway.

“That growth makes us the fifth-fastest-growing mutual fund industry in the US organically, if you discount firms that have acquired other asset managers,” says Parker.

The firm distributes almost entirely through some form of financial intermediary, not direct to consumers as “that is not where we feel we have a particular strength”, he says.

“Particularly in Europe, unlike the US, we are not creating wholesalers. We service the fund selectors and they figure out ways for our capability to be distributed through their systems.

“In many ways we are just getting started in Europe. After launching our very first European fund for an institutional client in 2013, we started our fund range in earnest in 2015 with 10 to 12 different products and we are now up to 26 funds.”

Last month, PGIM Investments entered the exchange-traded space with the launch of an ultra-short bond ETF: an actively managed fund that aims to deliver current income and capital appreciation with a focus on managing risk. “Being able to offer products in different types of vehicles is very compelling and that is the way we would look at an ETF structure,” he says. “It is not a way to enter the passive market, just another way of accessing our capability.”

Parker is tight-lipped about whether he has any growth targets for the company’s European business but says he is pleased with the progress so far. “Our overall fund family has grown 30% over the last year, but from a relatively small base. The important thing is that we do not want to be that American company that would send a bunch of people over to

Europe and go back and maybe you would never see us again.
“We want to establish to the market place that we are long-term thinkers who will grow at a measured pace and are here for the long term.”

Barriers to entry
Parker points to various challenges for a newcomer wanting to break into the fiercely competitive European funds industry. “I think that the barriers to entry are real but not insurmountable,” he says. “The regulatory environment is challenging and being able to provide marketing materials in various languages in the way that clients want to consume are particular challenges of the European market. But I don’t believe in having a pan-European strategy. I think you have to go market by market to determine where we can be most successful to our clients.”

Parker says that Brexit is “creating challenges but not headaches” because all of PGIM’s European funds are domiciled in Dublin. The UK’s departure from the EU is, though, causing PGIM to “think about cross-border distribution and where we would put sales people”.

“Brexit is a very fluid type of issue and we are monitoring how it plays out very closely. The fact that we are just getting started now is actually a bit of an advantage for us when it comes to new regulation like MiFiD II [the EU’s revised capital markets rules that came into force in January] because there is nothing for us to really undo.”

The cost of complying with MiFID II’s reporting requirements will “not be insignificant”, but while the regime will make things more difficult for smaller managers that don’t have scale, “firms like ours are very well accustomed to complying with regulation”.

Looking ahead, Parker says that Latin America and Asia could be future growth areas, but for the moment the company is focused on growing in Europe. “Our strategy when we go into a market is to become broad and deep within that market before we go elsewhere,” he says.

“We still have a lot of work to do in Europe to be meaningful and so we are not taking our eye off the ball.”