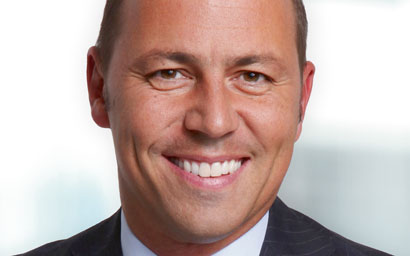 Axa Investment Managers chief executive officer, Andrea Rossi, talks to David Stevenson about bringing all his firm’s subsidiaries under one name and the opportunities that a difficult market presents.

Andrea Rossi, the half-Swedish, half-Italian chief executive officer (CEO) of Axa Investment Managers, has good reason to feel pleased with himself. His firm benefited from €42 billion in net new money last year and expanded globally into locations such as Mexico, Stockholm and Seoul.

Rossi, though, cuts a modest figure; when asked about the good year for his firm in 2015, he immediately adds “and for our clients!” – adding that he was pleased they stuck with Axa IM last year.

In terms of geographical expansion, the country that stands out is Mexico, given that Latin America has not had the best of times recently. “Mexico is an interesting one,” Rossi explains. “From there we can cover what I call the Pacific Alliance: Chile, Peru, Colombia and Mexico.”

It helps that Axa IM’s parent company, insurance giant Axa, already has a foothold in Mexico. In fact, of Axa IM’s €600 billion in assets under management, 61% is held by Axa, 30% for institutional investors and 8% for retail.

For Rossi, the move into central America is part of a wider plan that includes increasing its presence in the world’s largest market, the US, which he describes as his “biggest bet”.

In the US, the firm manages €90 billion in assets with a team of 160 people, although mainly for non-US clients. Rossi says he has a strong team working on leveraged loans and collateralised loan obligations (CLOs). When asked about the bad name these securitised products picked up after the financial crisis, he says: “Regulation has to serve for something!”

Last year, Axa IM issued €1.5 billion in CLOs, mainly to US clients but also to some Europeans, where the 5% equity retention rules are in place. That said, Axa IM still issued a €500 million CLO in Europe.

WHAT'S IN A NAME?
Last year, Axa IM went on a large marketing drive in France and Italy. Both countries are known for having large bank and insurer-owned asset managers. Although the advertising had clear commercial goals, Rossi explains that part of the reason was to promote the brand name. In 2015 the firm absorbed its six subsidiaries into the Axa Investment Managers name. “Before we had subsidiaries and people got lost and we had to spend 20 minutes explaining, but now it’s Axa IM and that’s it.”

The Italian campaign was more of a push to reinforce the firm’s presence, says Rossi. He wanted to promote Axa IM in the growing retail market in Italy, which has attracted the majority of fund flows in Europe over the past couple of years. It is working with several of Italy’s big distributors, he adds, and last year saw inflows of around €3 billion.

Rossi believes active managers could do well in the current volatile market. Last year was a good year for many active managers, “not for all of us but for some”. He believes that in years of heightened volatility, both institutional and retail clients need investment advice and decent active managers to support them. “This is an opportunity for active asset managers to make a difference.”

More than 70% of Axa IM’s funds are in the first or second quartile for performance.

NEW FUNDS
Axa IM is in process of launching an absolute return liquid alternatives fund in Hong Kong. Pierre Emmanuel Juillard has rejoined the firm to run it: “The lost son has come back!” exclaims Rossi. Juillard resigned in 2010 to take a role with Goldman Sachs.

Liquid absolute return strategies are defined as funds pursuing absolute, positive returns in all market conditions. Rossi says that this Hong Kong-based fund is still being built up; the firm is busy working on the strategy but hopes to launch it by the last quarter of 2016, subject to regulatory approval.

“The fact that someone like [Juillard]  has joined us and brought a team shows he has strong faith in our distribution capabilities, global reach and the fact we have a very large client base,” says Rossi.

Axa IM also launched a robotics fund three months ago in Japan, which he says is proving popular. It has had €750 million of inflows. Rossi plans to distribute the fund to regions outside Japan and sees robotics as an interesting theme that performs well. He says it’s necessary to understand the constant evolution of client needs while also being prepared to educate clients.

SOLVENCY II
You’d expect Axa IM to have a solid understanding of Solvency II insurance company regulations due the link with its parent company. “We speak insurance language, so it’s an easy win when we go and speak to insurers.”

However, Rossi would like his firm to have a larger market share and says people do not seem to know about this part of Axa IM’s offering.

The firm has been working on Solvency II since 2004. Rossi feels the capability has not been promoted so well, but this has changed with a dedicated team to pursue insurance mandates.

But he is not resting on his laurels. ”Axa IM still has to be better known. The reason why I am frustrated is we have such great performance of our funds. We need to do more.”

Rossi adds that the area his firm has been lacking is in sales and marketing. “You can have the best product in the world but [what] if nobody knows about it?”

The firm scored something of a coup with the hire of Hazel Pitchers as global head of marketing. She was previously head of retail marketing for Europe, the Middle East and Africa at US powerhouse BlackRock, which goes some way to illustrate the draw of Axa IM.

“I’m very proud of being able to attract people from competition. They see the potential here, thanks in part to the Axa name,” says Rossi.

Another area of focus was the institutional side of the business, which the CEO describes as “super important”. The firm has been beefing up the client group team that handles this part of the market, and indeed has doubled its size in the past two years as Rossi thought it had been lacking in this area.

“I want to make sure I can give all the solutions, be it single asset or multi-asset. We will continue to enrich our offering,” he says.