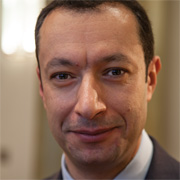 Invest AD from Abu Dhabi is switching its Cayman funds to Luxembourg and aiming to raise capital in Europe for an emerging Africa product. Mohammed Al Hashemi, head of asset management, talks to Nick Fitzpatrick.

Anyone selling a frontier market fund is obliged to point out that investors in these products should expect a rough ride. But if frontier market products become so commonplace that this warning loses its impact, then just keep in mind Invest AD’s experience.

In December 2010, the Abu Dhabi-based and government-owned fund manager launched a Libya listed equities fund. You can see where this is going.

It began to deploy capital in early 2011 but then came the uprising and the stock exchange closed in February last year. It has been closed ever since.

Al Hashemi says: “We saw the same catalysts for investing in Libya that attracted investors to Iraq. Both economies have huge infrastructural needs, but both countries also have significant hydro-carbon reserves and a political will. Iraq held its first democratic election for decades in 2010 and the first government was formed in November. After that, the market took off and was one of the best performers in the world last year.”

Running a fund management business with such an emphasis on two of the world’s riskiest markets of the past ten years might not be to every executive’s liking. But, he adds: “Keep in mind our mandate has always been the Middle East and Africa which have always been classified as emerging and frontier markets. It’s our region. It’s normal to us.”

After 30 years of existence, during which it invested government money, Invest AD began in 2007 to seek third-party mandates from institutional investors, family offices and banks for both funds and segregated business.

The first of its public equity funds was the Emerging Africa fund in 2009, followed by the GCC Focus fund, which targets the countries of the Gulf Cooperation Council, and the single country funds, starting with the UAE Total Return fund targeting the United Arab Emirates.

The Africa fund has been re-domiciled from the Cayman Islands to Luxembourg and Invest AD recently started to raise the profile of African investment among European and Japanese institutional investors (see page 52). “There has been an inclination by investors over the last two to three years to shift more capital to frontier markets,” says Al Hashemi.

Recently, Invest AD hired the Economist Intelligence Unit to research institutional attitudes to investing in Africa. Of the 158 global senior executives surveyed, including pension funds and endowments, 51% considered Africa the most attractive region for investment over the next decade, especially Nigeria, Kenya, Zimbabwe, Egypt, Ghana and Libya. Respondents were split evenly between North America, Europe, Asia-Pacific, and the Middle East and Africa. About half had up to $499 million (€371 million) under management, while 22% had at least $10 billion.

Favoured countries
In January, Invest AD signed a memorandum of understanding with Africa’s newest country, South Sudan, to invest in infrastructure areas, such as railways, energy and telecommunications. “How often do you come across a country that seeks your help and guidance in building their economy! Many investment managers would welcome that.”

“In the Middle East, segregated accounts have always been in demand, but the banks are now looking more at Ucits funds.”

To convert the Emerging Africa fund to a Ucits fund, exposure to South Africa was increased to gain more liquidity for compliance with Ucits standards. Zimbabwe was cut back. Al Hashemi says: “Zimbabwe was one of the favourite countries in the survey, but the Luxembourg regulator had a problem with some of the smaller markets the fund accesses.” But he adds that South African companies that are invested in derive most of their revenues from Africa to maximise exposure to African growth while remaining Ucits-friendly.

There is a huge disparity in the size of markets in Africa. South Africa has an investable size of $300 billion, Ghana $2.6 billion. Overall, the investable market is $750 billion.

Back with the Iraq fund, Al Hashemi says the investable market is getting bigger with some secondary issuance in the shape of three telecom floatations, each expected to be around $26 billion.

Prior to Invest AD, Al Hashemi worked at the London office of the Abu Dhabi Investment Authority (Adia), the world’s largest sovereign wealth fund. He started as an analyst in listed equities, later becoming head of investment strategy for Europe.

He says good practices from Adia have been brought over to Invest AD in terms of its operational infrastructure. “We were among the first investment managers in the Middle East to deploy an independent administrator and custodian when our mandate was expanded to cover third-party business.”

Referring to the transparency of reporting performance, he adds: “We made sure to put an emphasis on performance and reporting, being one of the first to become Gips-[Global Investment Performance Standards] compliant.”

So, what was the performance of the Iraq fund, which was invested in one of the world’s best performing markets in 2011? “There is no reliable index measure available, but our fund is up 14% in the 26 months since inception.”

That is possibly the kind of white-knuckle ride frontier market investors don’t mind. It is expected that the Libyan stock exchange will open before summer and it will be interesting to see how that journey progresses.