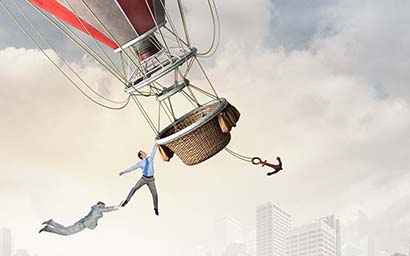 Tough post-Brexit rules on mutual funds proposed by the European Commission are seen as threatening the bedrock of Luxembourg’s success, finds Mark Latham.

When the European Commission suggested last year that post-Brexit, it planned to beef up the powers of the pan-European financial regulator, the European Securities and Markets Authority (Esma), there was a howl of protest from Luxembourg.

At the heart of the debate is the concept of delegation, which allows funds to be set up by asset managers in one EU state while outsourcing the investment management to fund managers in another country.

Under the Ucits framework, which the UK will stop being part of once it leaves the EU, such cross-border funds can then be sold across the EU.

Luxembourg, home to one out of every ten funds in the world, has said it wants to remain a partner of the UK’s financial services industry after Brexit.

But for the UK-EU divorce to remain relatively painless from a fund management point of view, the crucial question is whether Esma will allow portfolio management to be delegated to the UK once the divorce is sealed.

The delegation model, which impacts around 90% of the assets under management (AuM) in EU funds, has allowed relatively small cities such as Luxembourg and Dublin to transform themselves into the EU’s top hubs in which funds are based, while allowing investment management to take place not only in EU financial centres such as Frankfurt, London or Paris but also those further afield such as Hong Kong, Singapore and New York.

France, which has made no secret of its hopes of attracting more asset managers to Paris, has not surprisingly welcomed the Commission’s plans to clamp down on so-called ‘letterbox’ entities, where only a token number of staff are employed within EU member states.

Unwelcome news
However, in Luxembourg – where the funds industry reached an AuM milestone of €4 trillion in September, an achievement credited in part to the delegation model – the Commission’s proposed plans have not gone down so well.

Denise Voss, chairman of the Association of the Luxembourg Fund Industry (Alfi), points to the fact that the Grand Duchy continues to be the largest fund domicile in Europe: of the new money that flowed into European funds in 2017, 32% went into Luxembourg-domiciled funds.

She also points to the fact that the largest beneficiary of Luxembourg’s funds industry, accounting for €854 billion or 21% of the AuM of its funds, is the US, which is outside the EU. In second place, UK investment firms manage 17.5% (€732 billion) of funds established in Luxembourg.

Voss, who is also a conducting officer at Franklin Templeton Investments, says that a key priority for Luxembourg, as Brexit negotiations rumble on, is “how we can continue this constructive relationship with the UK even after Brexit”. She says “it is hard to deny” that the Commission’s proposal on the review of European Supervisory Authorities (ESAs) and Brexit negotiations are linked.

“Alfi does not see any benefits from these proposals for the end investor,” she adds. “We do not embrace direct supervision by Esma as we believe that the close oversight of market participants and products by national competent authorities guarantees the best and most efficient level of investor delegation arrangements and outsourcing to third countries. This would introduce an extra layer of regulation, additional costs and delays in time to market.”

Massimo Greco, head of European funds at JP Morgan Asset Management, believes that the concept of delegation – along with investor protection and diversification – is one of the key pillars of Ucits’ and alternative investment funds’ success. “Delegation has worked extremely well historically and has been critical in making Ucits not just a European, but a truly global, success story,” he says.

Greco describes the delegation model as “a reliable, well-functioning and tested model” that has been central “to ensuring EU investors can access world-leading investment expertise while protecting their safety through robust European rules, oversight and supervision”.

He adds: “We should take care not to tamper with a framework that has served Europe and global investors well over the past three decades.”

Tom Théobald, deputy chief executive of Luxembourg for Finance, a public-private agency that promotes Luxembourg’s financial industry, believes that the delegation model itself is not put in question by the Commission’s proposals “in the sense that there is no discussion on whether delegation should still happen. The question is more about how delegation should be regulated,” he says.

Théobald points to the fact that the delegation model has benefited not only the European funds industry but the funds industry globally, enabling it to create economies of scale in Luxembourg around an ecosystem of fund administration expertise.

The delegation model allows specialised fund managers to be based close to the markets in which they are experts, he says. “It makes more sense to have an Asia-focused fund manager based in Hong Kong or Japan rather than having them sit in London or Luxembourg or Frankfurt.

“When it comes to the proposed changes to delegation, the justification that has been given is Brexit and yet the Commission is prejudging the Brexit negotiations that have not even started yet, so why is the Commission trying to solve a problem that is completely hypothetical?

Whether the UK is in or outside the EU, nothing fundamentally changes with regards to the actual delegation model which is the de facto standard in the fund industry today, not just within but also outside the EU.”

Crash landing
Lou Kiesch, a partner at Deloitte Luxembourg, says it is essential that the delegation model, which allows EU-domiciled funds to outsource investment management decisions to fund managers outside the EU, is preserved.

Kiesch, who heads up Deloitte’s compliance and regulatory practice and is vice-president of Alfi’s regulatory board, says there has been no instance where delegation has not worked. “This is not an industry matter and it is not a regulatory matter: it is purely a politically driven matter. There is no justification for it apart from political dogma.”

Kiesch regrets the outcome of the UK’s referendum on membership of the EU, saying that “there is plenty of time for the British government to effect a U-turn if that is what they want”.

“Hopefully Brexit will not stigmatise and marginalise the UK to the extent that it will be sidelined,” he says. In the meantime, the important thing is to find a solution with the industry in the UK.

“The whole success of the funds industry is based on globalisation. If an important jurisdiction like the UK – from an asset-servicing and investment management perspective – is not part of that globalised unit any more, that cannot be good for anybody in the industry in the long term, be that in France, Germany, the UK, Ireland or Luxembourg.

“If the link is cut with one of the most important investment management centres in a hard Brexit situation, I cannot understand how anyone could see that as a positive thing. We still hope that there will be a soft Brexit and that the models that are currently in place will prevail, Brexit or no Brexit.” 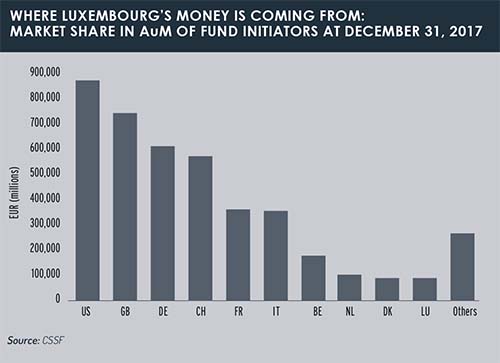 Decisions need to be made as soon as possible, Kiesch says, as the process of asset managers re-domiciling funds away from the UK is already underway. “People cannot afford to wait for a worst case-scenario to unfold and then to find themselves unprepared.”

Despite unanimous backing among the local fund industry for the preservation of the delegation model, there are some companies in Luxembourg that stand to benefit from Brexit.

Richard Marshall, head of product at FundRock, works for a €40 billion AuM third-party management company that is reliant for 70%-80% of its work on delegating the investment management of Luxembourg-domiciled funds to managers in the US or UK.

“Brexit is good for our business and we have won business related to Brexit,” he says. “And that is predominantly down to the loss of passporting. Our working assumption is that passporting will go and delegation will survive.”

Marshall believes that the UK’s withdrawal could, in the long term, lead to the emergence of a quite different financial regulation regime in the EU. “When it came to financial regulation, Luxembourg, the UK and Ireland had their own needs and often voted together. So what will be the impact of the loss of the UK on qualified majority voting in the EU Council? It could mean that Luxembourg and Ireland will in future have to find a big friend to make sure their businesses models are safe.”

While Brexit – which Marshall describes as “a perversion of the globalisation of the last 10-20 years” – will likely prove to be “bad” for the City of London, he says he does not believe it will be disastrous.

“London is a truly global city connected to the world. I think that the UK will eventually look back in 20 or 30 years and realise that it has become poorer than if it had had stayed in the EU.”